3 Carrier Concentration in an Intrinsic Semiconductor

5.4. Variation of carrier concentration with temperature in n – type semiconductor

7 Variation of carrier concentration with temperature in P- type Semiconductor

Based on electrical resistance

The resistivity of a semiconductor is lesser then an insulator but more than that of a conductor. It is in the order of 10-4 to 0.5 ohm metre.

Based on energy band 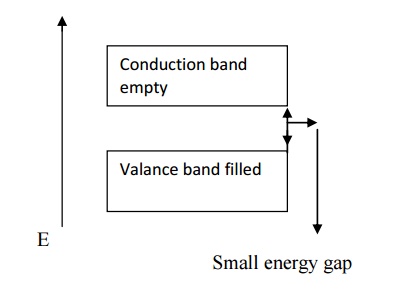 They are formed by covalent bonds.

They have small energy gap They posses crystalline structure

They have negative temperature co efficient of resistance

The semiconductors are classified mainly into two types based on composition of materials.

These semiconductors are made from a single element of fourth group elements of the periodic table.

They are also known as indirect band gap semiconductors

A semiconductor in extremely pure form, without the addition of impurities is known as intrinsic semiconductors. Its electrical conductivity can be changed due to thermal excitation.

At 0K the valance band is completely filled and the conduction band is empty. The carrier concentration (i.e) electron density (or) hole density increases exponentially with increase in temperature.

A semiconductor in extremely impure form, with the addition of impurities is known as extrinsic semiconductors.

We know that, at 0K intrinsic pure semiconductor behaves as insulator. But as temperature increases some electron move from valance band to conduction band as shown in fig. therefore both electrons in conduction band and holes in valance band will contribute to electrical conductivity. Therefore the carrier concentration (or) density of electrons (ne) and holes (nh) has to be calculated. 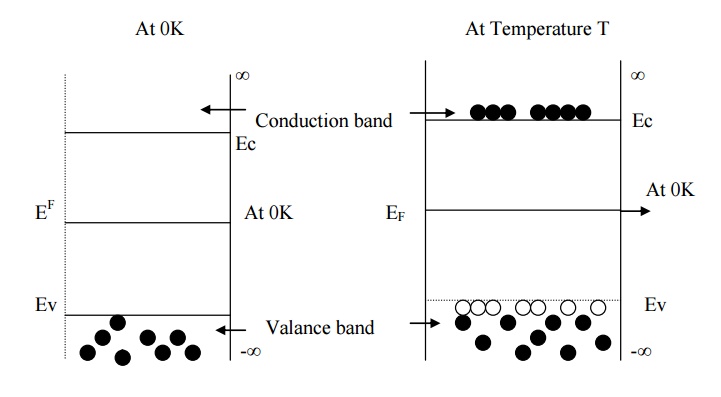 3. CARRIER CONCENTRATION IN AN INTRINSIC SEMICONDUCTOR

3.1. DENSITY OF ELECTRONS IN CONDUCTION BAND

We know Fermi function, probability of finding an electron in a given energy state is

Differentiating we get dE = KBT. dx,

Equation 6 can be written as 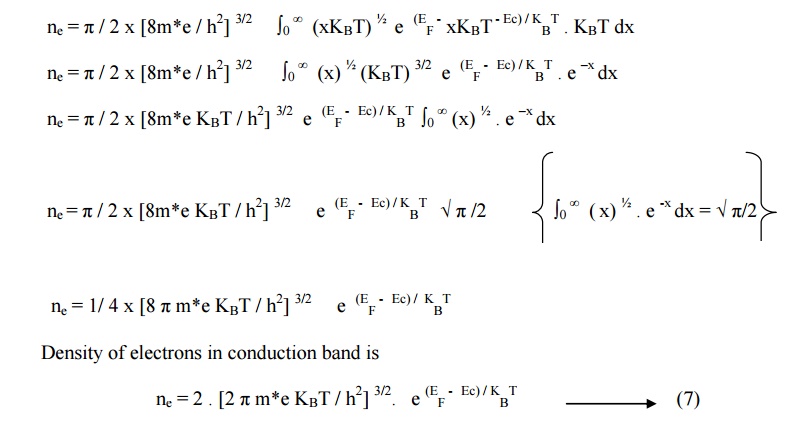 3.2. DENSITY OF HOLES IN VALANCE BAND 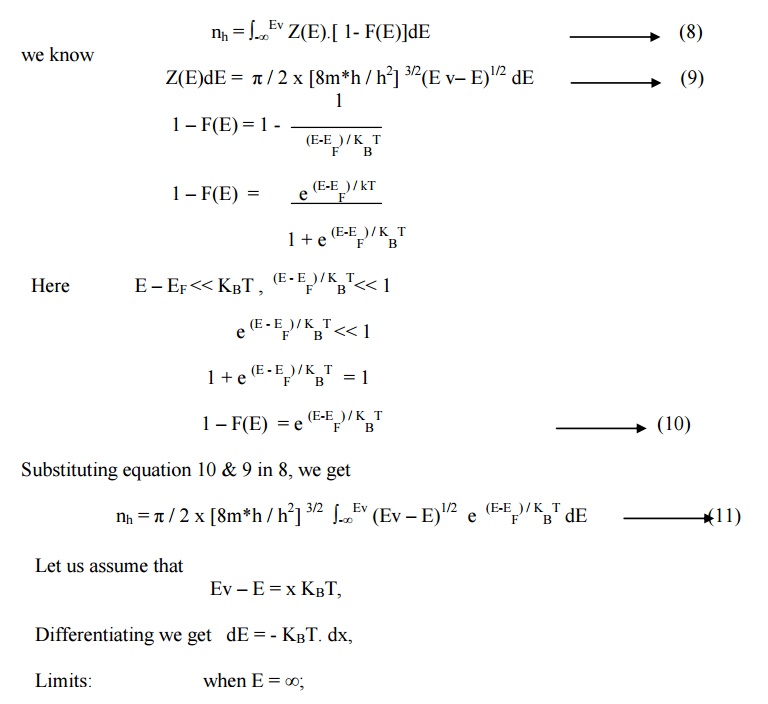 Let us assume that

Where Ec –Ev = Eg is the forbidden energy gap.

For an intrinsic semiconductor number of electrons (i.e) electron density will be the same as that of the number of holes (i.e) hole density. 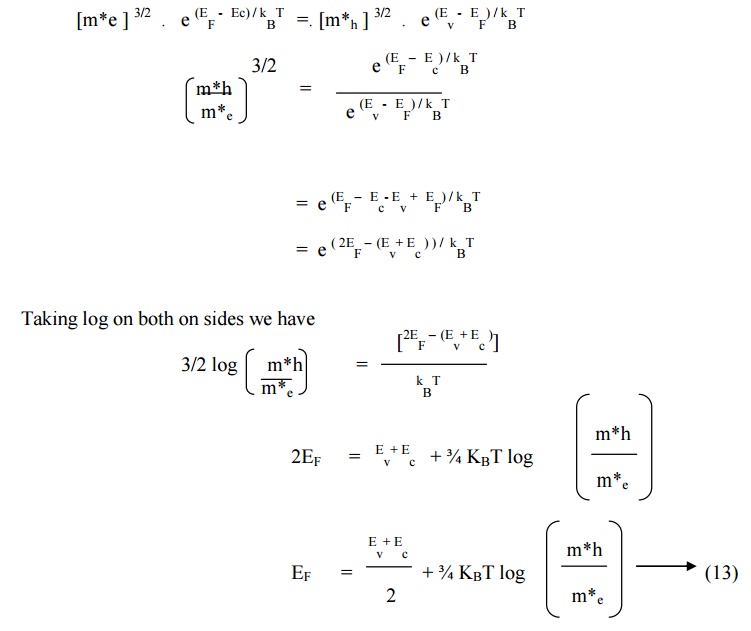 But in actual case m*h m*e and the Fermi energy level slightly increases with increase in temperature as shown in fig. 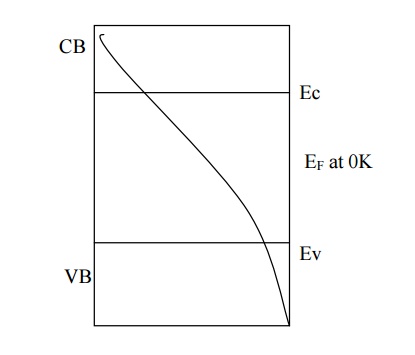 Where μ is proportionality constant and it is known as the mobility of the charge carrier being  considered. Mobility μ is defined as the velocity of a charge carrier produced unit field strength.

The electron and hole nobilities are denoted by the symbols μe and μh  .

On the basis of free electron theory of solids, the electrical conductivity of metal is given by

Using the equation 1, the electrical conductivity of a semiconductor due to electrons in the conduction band is given by

Where n e is the number of electrons per unit volume; e is the charge of an electron

μe is the electron mobility.

Similarly, the electrical conductivity of a semiconductor due to holes in the valance band is given by

where n h - is the hole density in the valance band; e - is the charge of a hole

μh –is the hole mobility

Therefore the total electrical conductivit conductivities due to electrons and holes.

Substituting equations 2& 3 in the equation 4,

For an intrinsic semiconductor, the number of electrons in the conduction band is equal to the number of holes in the valance band,

Where n i is the intrinsic carrier concentration.

Hence, the electrical conductivity of an intrinsic semiconductor is given by

Thus, the electrical conductivity depends upon the negative exponential of the forbidden energy gap  Eg and on the motilities’ of both electron and holes.

Electrical conductivity of an intrinsic semiconductor is given by 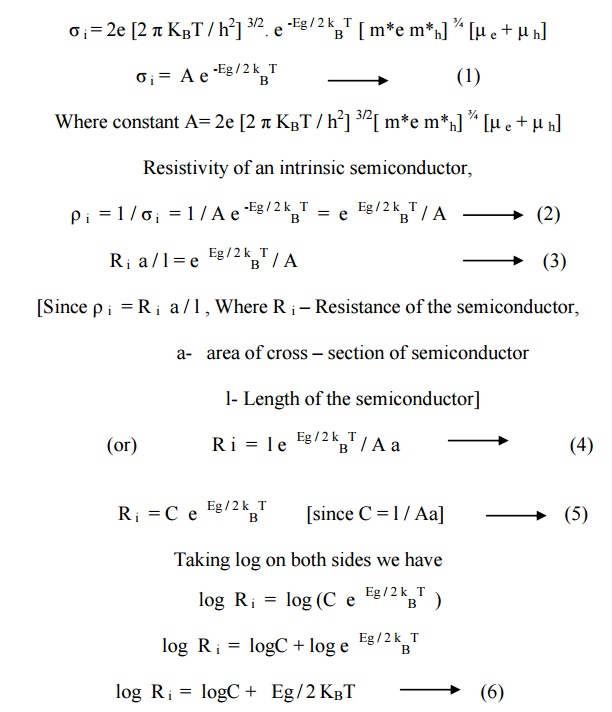 This equation (6) is similar to the equation of a straight line, y = mx + c

From  the  equation  6,  it  is  noted  that  by  measuring  the  resistance  of  an  intrinsic semiconductor at different temperatures, its forbidden energy gap Eg can be determined.

If a graph is drawn between log R and 1 / T, the value of Eg is determined from the slope of a straight line.

From the graph slope = dy / dx

Substituting the expression for the slope in equation (7), we have

Where, k is the Boltzmann’s   constant.

The method of adding impurities to a pure semiconductor is known as doping and impurity added is called doping agent or dopant.

The addition of impurities will increase the number of free electrons and holes in a semiconductor and hence increases its electrical conductivity.

Conductivity can be controlled to any desired value through the control of doping concentration.

Conductivity is not a function of temperature.

The extrinsic semiconductors are classified into two types based on the type of impurity added.

When a small amount of pentavalent impurity (group V element) is added to a pure semiconductor, it becomes a n –semiconductor.. such impurities are known as donor impurities because they donate the free electrons to the semiconductor crystal.

semiconductor atom and remaining 1 electron of the impurity atom is left free as shown fig. 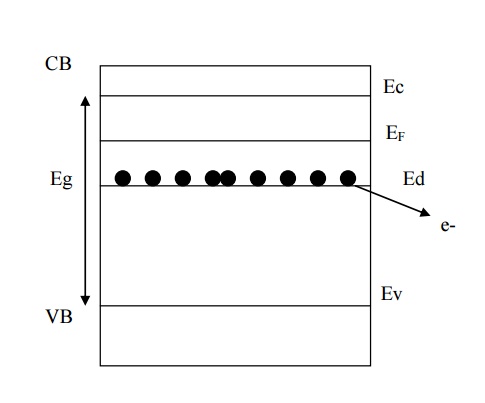 Since the impurity can accept the electrons this energy level is called acceptor energy level (Ea) and is present just above the valence band as shown in fig. 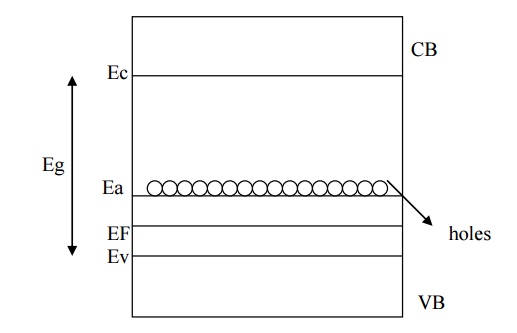 Here the current conduction is mainly due to holes (holes are shifted from one covalent bond to anther).

The energy band structure of n –type semiconductor is shown in fig. At 0 K, EF will lie exactly between Ec and Ed, but even at low temperature some electrons may go from Ed to Ec. Let us assume that Ec –EF > KBT. Then the density of electrons in conduction band can be written as 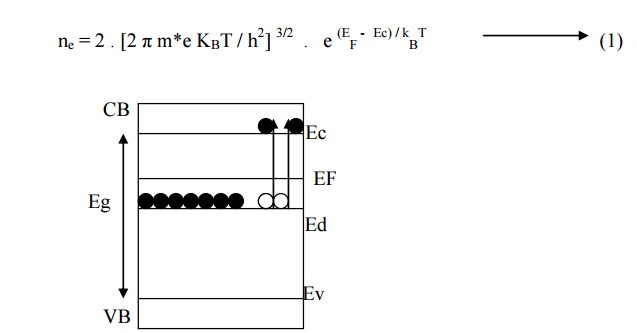 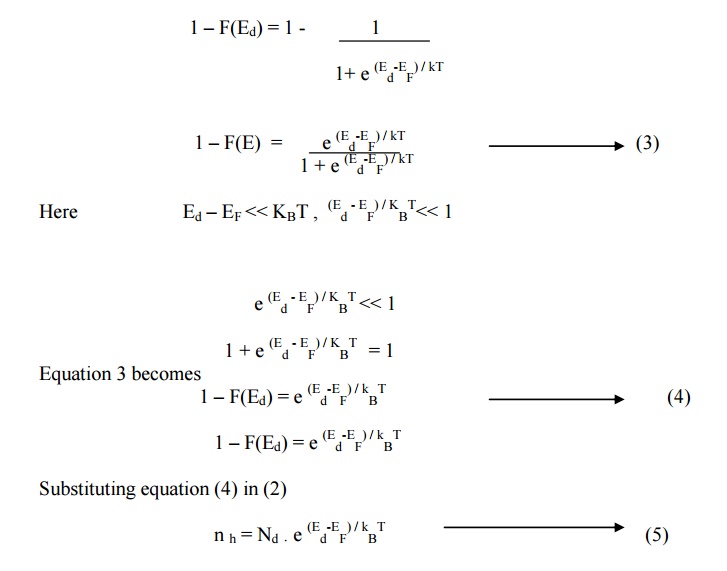 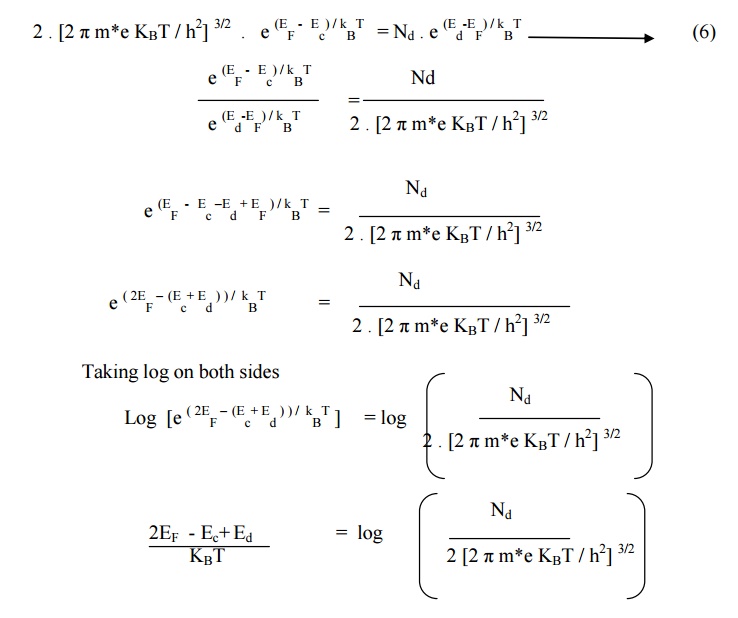 Equation (7) shows that, at 0K, EF will lie expertly in the midway between Ec and Ed.

By substituting Ef value from equation (7) into expression 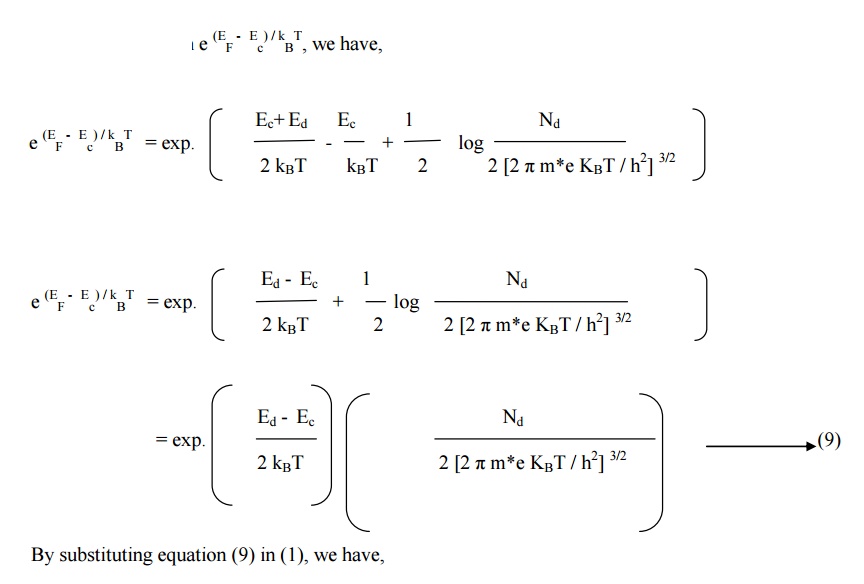 We know that electrical conductivity in semiconductor is given by

This equation represent the electrical conductivity of n –type semiconductor.

5.4 VARIATION OF    CARRIER CONCENTRATION WITH TEMPERATURE  IN N – TYPE SEMICONDUCTOR

When the temperature increased some electrons in Ed level may be shifted to conduction band and hence some vacant sites will be created in Ed levels. Therefore the Fermi level shifts down to separate that empty levels and the filled valance band level as shown in fig.

From the above figure it can be seen that for the same temperature, if the impurity atoms (i.e) doping level is increased, the electron concentration increases and hence Fermi level increases.

For p –type at absolute zero EF will be exactly between Ea and Ev. At low temperature some electron from valence band fills the holes in the acceptor energy level as shown in figure.

We know the density of holes in the valence band,

if two electrons are accepted to fill the hole sites in the acceptor levels, then two holes will be created in the valence band as shown in fig . 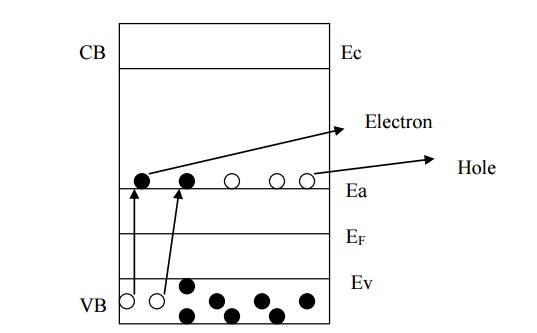 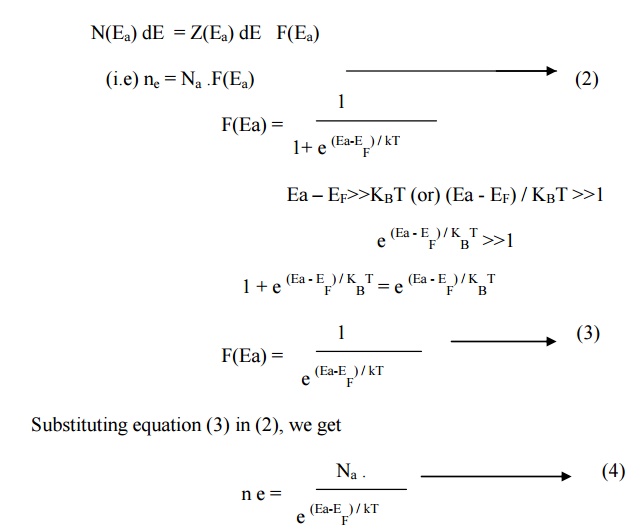 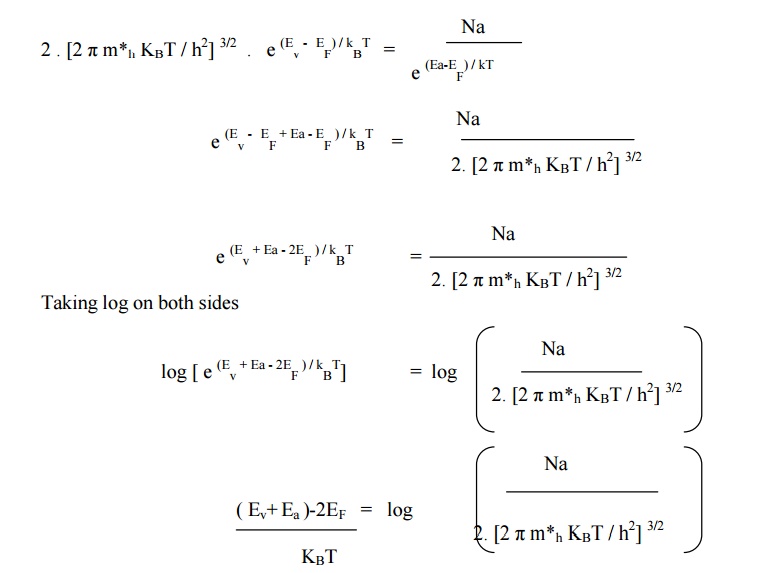 When the temperature is increased, some of the electrons in the valence band will go to the acceptor energy level by breaking up the covalent bonds and hence Fermi energy level shifted upward direction for doping level of Nd = 10 21 atoms / m3 as shown in figure.

From the figure it can be seen that for the same temperature, if the impurity atoms (i.e) doping level is increased say Nd = 10 24 atoms /m3, the hole concentration increases and hence the Fermi level decreases. 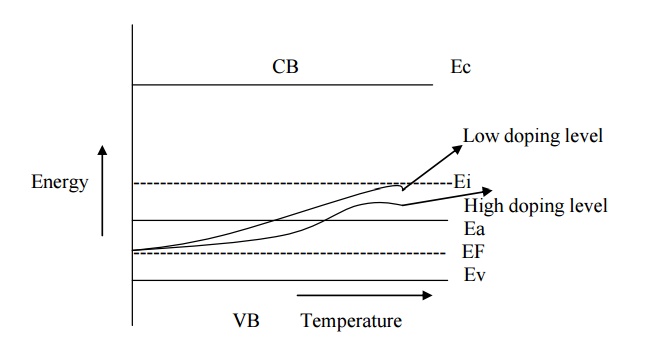 Therefore at low temperature the Fermi energy level may be increased up to the level of intrinsic energy level (Ei).

Measurement of conductivity will not determine whether the conduction is due to electron or holes and therefore it will be very difficult to distinguish between p –type and n- type semiconductors.

Let us consider a n-type semiconductor material in the form of rectangular slab. In such a material current flows in X –direction and magnetic field B applied in Z- direction. As a result, Hall voltage is developed along Y –direction as shown in figure. 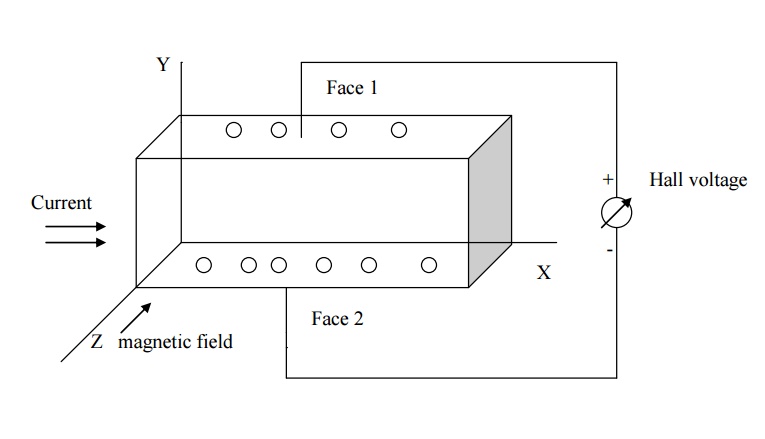 Now due to magnetic field applied the electron moves towards downward direction with velocity v and cause negative charge to accumulate at face (1) of the material as shown in fig. therefore the potential difference is established between the face (2) and face (1) of the specimen which gives rise to EH in the negative Y direction.

We know the current density Jx in the X- direction is

Where RH is known as the Hall co –efficient, is given by

The negative sign indicates that the field is developed in the negative Y –direction.

Now due to magnetic field applied the holes moves towards downward direction with velocity v and accumulates at the face (1). A potential difference is established between face (1) and (2) in the positive Y - direction.

We know the current density Jx in the X- direction is

Where RH is known as the Hall co –efficient, is given by

If the thickness of the sample is t and the voltage developed is VH, then

Substituting equation (6 )in equation (13), we have

If b is the width of the sample then

Area of the sample = b.t 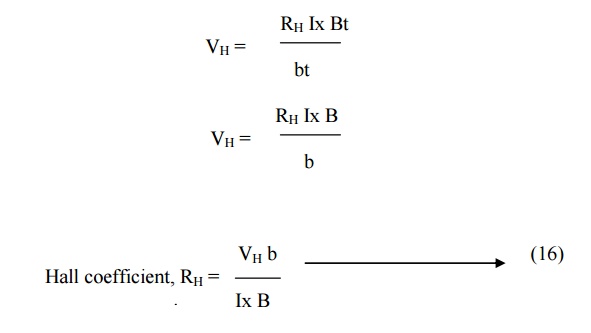 The sign for VH will be opposite for n and p type semiconductors.

We know that Hall coefficient,

The above expression is valid only for conductors where the velocity is taken as the drift velocity.

For n –type semiconductor, the mobility of electron is

Similarly for p –type semiconductor, the mobility of hole is

A semiconducting material is taken in the form of a rectangular slab of thickness t and breadth b. A suitable current Ix ampere is passed through this sample along X- axis by connecting it to a battery. 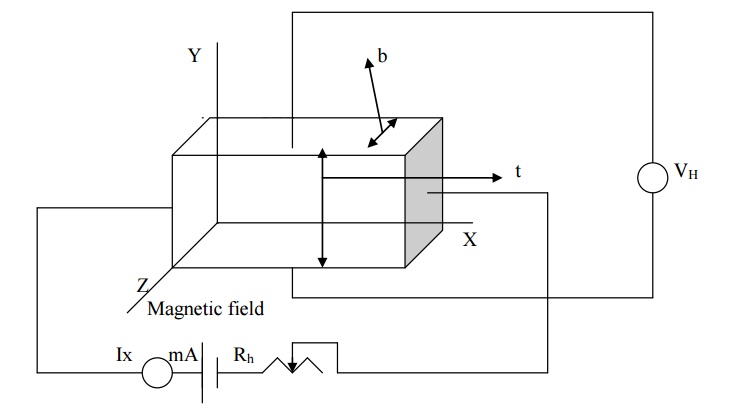 This sample is placed in between two poles of an electro magnet such that magnetic field is applied along Z –axis.

Due to Hall Effect, Hall voltage (VH) is developed in the sample. This voltage measured by fixing two probes at the centers of the bottom and top faces faces of the sample. By measuring Hall voltage, Hall coefficient is determined from the formula

From the hall coefficient, carrier concentration and mobility can be determined.

It is used to find the carrier concentration

It is used to find the mobility of charge carriers μe, μh.

It is used to find the sign of the current carrying charges.

It is used to design magnetic flux meters and multipliers on the basis of Hall voltage. It is used to find the power flow in an electromagnetic wave.