1.      What is difference between air conditioning and refrigeration?

Refrigeration is the process of providing and maintaining the temperature in space below atmospheric temperature.

Air conditioning is the process of supplying sufficient volume of clean air conditioning a specific amount of water vapor and maintaining the predetermined atmospheric condition with in a selected enclosure.

The temperature which is measured by an ordinary thermometer is known as dry bulb temperature. It is generally denoted by   .

It is the temperature of air measured by a thermometer when its bulb is covered with wet cloth and exposed to a current rapidly moving air. It is denoted by   .

Specific Humidity is defined as the ratio of mass of water vapor (m(v)) to the mass  of dry air in the given volume of mixture.

6.  Differentiate between absolute and relative humidity?

8.What is dew point temperature? How is it related to dry bulb and wet bulb temperature at the saturation condition?

It is the temperature at which the water vapor present in air begins to condense when the air is cooled.

For saturated air, the dry bulb, wet bulb and dew point temperature are all same.

9.What is sensible heat factor?

Humidification is defined as the process of adding moisture at constant dry bulb temperature. So, but . So, the humidity ratio increases from .

Dehumidification in this case, the humidity ratio decreases by removing moisture from air. But this process is carried out at constant dry bulb temperature , but. The heat involved in dehumidification is also called as latent heat load.

When a gas or vapor expands and flows through an aperture of small size, the process is called as throttling process.

13. What is effective temperature?

Effective temperature is defined as that temperature of saturated air at which the subject would experience the same feeling of comfort as experienced in the actual unsaturated environment.

14. Describe the heating and humidification process.

In case of winter air conditioning heating and humidification are very common. The system consists of a coil for sensible heating of air from state1 to state 3 then along the wet bulb temperature line through state2. Thereafter the humidification occurs along the wet bulb line until the required moisture is added to reach state2. The amount of moisture addition can again be calculated by m w = m (w2-w1). if the ignores the internal functioning during heating and humidification, one can reach state 1 to 2 by adding appropriate amount of moisture and heat as shown by process 1-2, dotted line 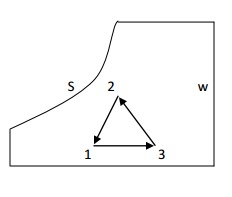 The energy transfer in these processes occurs with change in temperature only, the specific humidity remaining constant. The heat transfer for this process can be obtained by the energy balance for the control volume for the known enthalpies, h1 and h2 and for the steady mass flow rate

Sensible heat is the heat that changes the temperature of the substance when added to it or when abstracted from it.

Latent heat is the heat that does not affect the temperature but change of state occurred by adding the heat or by abstracting the heat.

17. What is meant by adiabatic mixing?

The process of mixing two or more stream of air without any heat transfer to the surrounding is known as adiabatic mixing. It is happened in air conditioning system.