psychrometry is a term used to describe the field of engineering concerned with the determination of physical and thermodynamic properties of gas-vapor mixtures.

psychrometry is a term used to describe the field of engineering concerned with the determination of physical and thermodynamic properties of gas-vapor mixtures. The term derives from the Greek psuchron meaning "cold" and metron meaning "means of measurement"

The principles of psychrometry apply to any physical system consisting of gasvapor mixtures. The most common system of interest, however, are mixtures of water vapor and air because of its application in heating, ventilating, and air-conditioning and meteorology.

Humid heat is the constant-pressure specific heat of moist air, per unit mass of dry air. 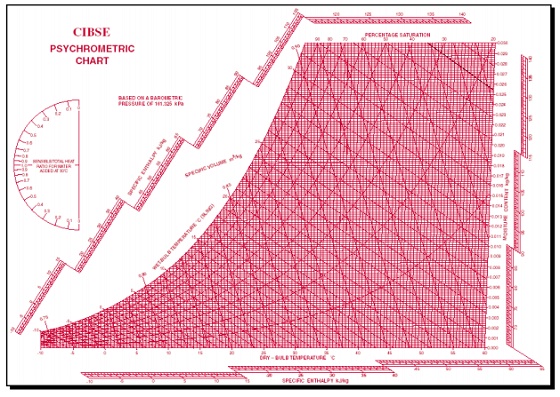 •Dry-bulb temperature (DBT) is that of an air sample, as determined by an ordinary thermometer, the thermometer's bulb being dry. It is typically the x-axis, the horizontal axis, of the graph. The SI units for temperature are Kelvin; other units are Fahrenheit.

•Wet-bulb temperature (WBT) is that of an air sample after it has passed through a constant-pressure, ideal, adiabatic saturation process, that is, after the air has passed over a large surface of liquid water in an insulated channel. In practice, this is the reading of a thermometer whose sensing bulb is covered with a wet sock evaporating into a rapid stream of the sample air. The WBT is the same as the DBT when the air sample is saturated with water. The slope of the line of constant WBT reflects the heat of vaporization of the water required to saturate the air of a given relative humidity.

•Dew point temperature (DPT) is that temperature at which a moist air sample at the same pressure would reach water vapor saturation. At this saturation point, water vapor would begin to condense into liquid water fog or (if below freezing) solid hoarfrost, as heat is removed. The dewpoint temperature is measured easily and provides useful information, but is normally not considered an independent property. It duplicates information available via other humidity properties and the saturation curve.

•Relative humidity (RH) is the ratio of the mole fraction of water vapor to the mole fraction of saturated moist air at the same temperature and pressure. RH is dimensionless, and is usually expressed as a percentage. Lines of constant RH reflect the physics of air and water: they are determined via experimental measurement. Note: the notion that air "holds" moisture, or that moisture dissolves in dry air and saturates the solution at some proportion, is an erroneous (albeit widespread) concept (see relative humidity for further details).

•Humidity ratio (also known as moisture content, mixing ratio, or specific humidity) is the proportion of mass of water vapor per unit mass of dry air at the given conditions (DBT, WBT, DPT, RH, etc.). It is typically the y-axis, the vertical axis, of the graph. For a given DBT there will be a particular humidity ratio for which the air sample is at 100% relative humidity: the relationship reflects the physics of water and air and must be measured. Humidity ratio is dimensionless, but is sometimes expressed as grams of water per kilogram of dry air or grains of water per pound of air.

•Specific enthalpy symbolized by h, also called heat content per unit mass, is the sum of the internal (heat) energy of the moist air in question, including the heat of the air and water vapor within. In the approximation of ideal gases, lines of constant enthalpy are parallel to lines of constant WBT. Enthalpy is given in (SI) joules per kilogram of air or BTU per pound of dry air.

RH BH is the relative humidity of the mixture being considered;

P(H2O) is the partial pressure of water vapor in the mixture; and

P(H2O) is the saturated vapor pressure of water at the temperature of the mixture. The international symbols U and Uw, expressed in per cent, are gaining recognition.