KEY POINTS ABOUT THE PROJECTIONS OF POINTS:

1.     The front view and the top view of a point are always on the same vertical line.

KEY POINTS ABOUT THE POSITIONS OF A POINT AND ITS PROJECTIONS:

PROJECTIONS OF A LINE INCLINED TO BOTH THE REFERENCE PLANES:

If a straight line is projected when it is inclined at e to the HP and either parallel to the VP or inclined to the VP, then:

angle with the HP does not change. In other words, if point A of a straight line

AB is fixed, point B will have its front view b' on a path parallel to the XY line.

If a straight line is projected when it is inclined at q; to the VP and either parallel to the HP or inclined to the HP, then:

(i)    The length in the front view remains the same and

(ii)If one end point in the TV remains at a constant distance and if the angle from XY with the VP does not change, the other end point will also remain at the same distance from XY. In other words, if point A of a straight line AB is fixed, point B will have its top view b on a path parallel to the XY line.

KEY POINTS TO REMEMBER ABOUT PROJECTIONS OF PLANES:

1. Plane perpendicular to one reference plane and parallel to the other (one step)

If it is parallel to the VP and perpendicular to the HP, its front view is drawn with the true shape and size and the top view is a horizontal line.

If it is parallel to the HP and perpendicular to the VP, its top view is drawn with the true shape and size and the front view is a horizontal line.

II. When a plane is perpendicular to one and inclined to the other, two steps are required to draw the projections (two steps)

Rotate the plane to make it inclined to one reference plane, as required, keeping it perpendicular to the other.

III. When a plane is inclined to both reference planes, three steps are required to draw the projections

The plate is assumed to be inclined to the VP at an angle Φ, while remaining perpendicular to the HP. The other edge, say, A2B2 also remains perpendicular to the HP. As relations with the HP do not change, projection on the HP, that is, the top view, remains as a straight line and front views are at the same distance from XY as the corresponding points are from XY in Step 1.

The plate is assumed to be rotated so that A2B2becomes AB, inclined at e to the HP. However, none of the lines or points changes their relations with the VP. Hence, in the front view the shape does not change and the distances of various points from the XY line in the top view remain the same in Step II and Step III.

THE POSITION OF THE PLANE TWO STEP PROBLEM:

THE POSITION OF THE PLANE FOR THREE-STEP PROBLEMS:

IMPORTANCE POINTS OF PROJECTION OF LINES

IMPORTANCE POINTS OF PROJECTION OF PLANES: 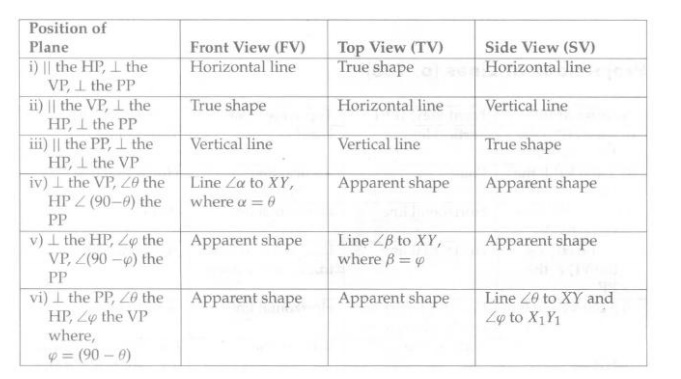 PROJECTIONS OF SOLIDS WITH THE AXIS PARALLEL TO ONE AND INCLINED TO THE OTHER REFERENCE PLANE:

HINTS FOR CONDITIONS TO BE SATISFIED IN TWO-STEP PROBLEMS: 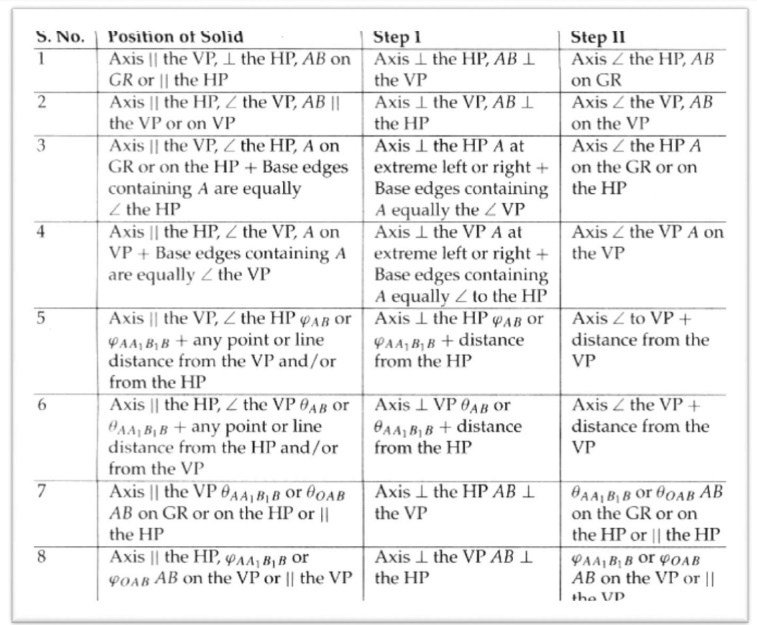 HINT FOR POSITION OF THE AXIS: 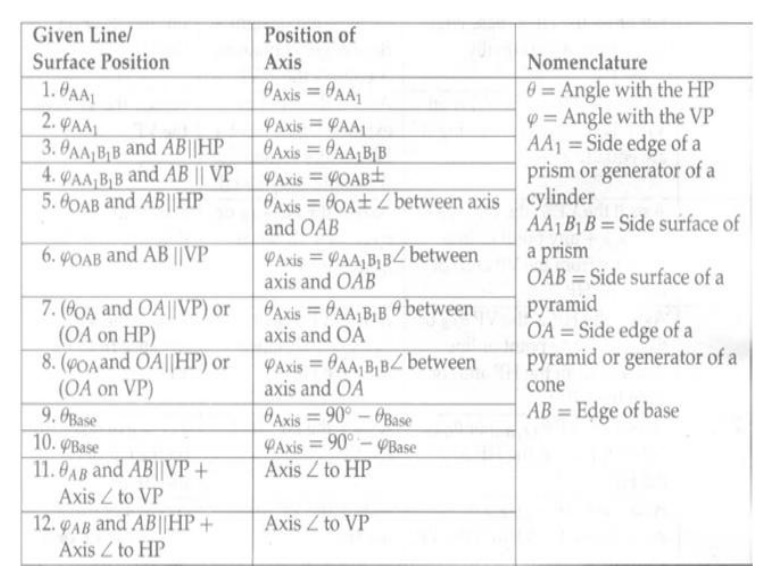 PROJECTIONS OF SOLIDS WITH THE AXIS INCLINED TO BOTH

THE HP AND THE VP (HINTS FOR CONDITIONS TO BE SATISFIED IN THE THREE-STEP PROBLEMS): 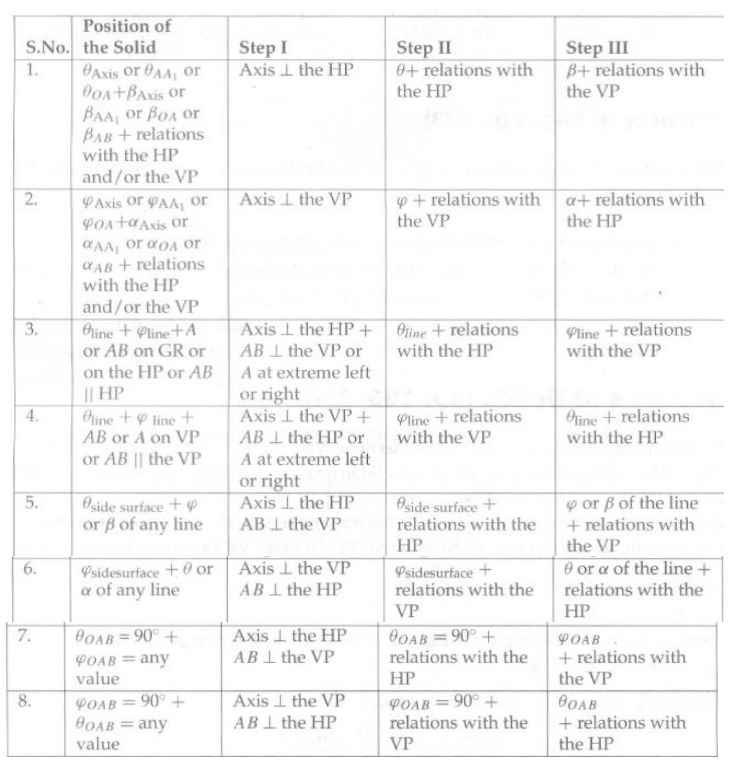 The following steps can be used to draw sectional views:

Draw the projections of the given solid in an uncut condition in both the views (the FV and the STY) by thin construction lines.

If the solid is a cylinder or a cone, draw a number of generators intersecting the cutting plane line. Obtain their projections in the other view. Generators are lines drawn through the points on the base circle and are parallel to the axis for a cylinder or joining the apex for a cone.

Locate the point’s common between the cutting plane line and the surface lines of the solid. These surface lines include the base and side edges of prisms and pyramids or the generators and circular edges of cylinders and cones. Number these points as follows:

(i)    Start from one end of the cutting plane, and move towards the other end naming the points on visible surface lines sequentially.

After reaching the other end, return along the cutting plane line and continue to number those points that are on hidden surface lines sequentially. In case of a hollow solid, imagine the hole as a separate solid and number the points in the usual manner.

Project the points in the other views by drawing interconnecting projectors and intersecting the concerned surface lines.

Join the points obtained in Step V by continuous curved lines if the points are on a conical or a cylindrical surface. Otherwise, join them by straight lines. The apparent section is completed by drawing cross-hatching section lines within the newly cut surface.

Complete the projections by drawing the proper conventional lines for all the existing edges and surface boundaries.

HINT TO LOCATE THE CUTTING PLANE:

The required cutting plane can be quickly located if the following hints are kept in mind:

1.    The number of comers in the true shape of a section is always equal to the number of edges of the solid that is cut by the cutting plane.

2.     The true shape of a section has a configuration similar to that of its apparent section. This means:

(i) The number of edges and corners are equal.

but a Circle need not be a circle. It may also be an ellipse.

3.      A section as curve can be obtained only when the generators of a cylinder or of a cone are cut.

4.   When a cutting plane cuts all the generators of a cylinder or a cone, then the true shape of the section is an ellipse.

5.    When the cutting plane is inclined to the base of a cone at an angle that is equal to, greater than or less than that made by its generator with the base, then the true shape of the section is a parabola a hyperbola or an ellipse, respectively.

6.    When a cutting plane cuts along the generators of a cone, then the true shape of the section is an isosceles triangle.

7.    When a cutting plane cuts along the generators of a cylinder, then the true shape of the section is a rectangle.

The actual procedure to locate the cutting plane involves the following steps:

Draw the projections of the given uncut solid in the proper position with respect to the HP and the VP by then lines.

Locate the point’s common between the cutting plane lines and surface lines, and number them in the same manner as in Chapter 10. The edges of the base or side surfaces are also surface lines.

Draw the development of the uncut solid and locate the positions of the surface Lines by thin lines drawn in Step III.

Complete the development by drawing boundary lines by thick lines. Complete the projections by drawing proper conventional lines for all existing edges and surface boundaries.

The steps for drawing isometric projections of an object are as follows:

Draw orthographic projections of the given object and enclose each view in the smallest rectangle. The sides of the rectangles should be vertical and horizontal lines only because they are supposed to be the principal lines of the enclosing box of the Object.

Draw all the boundaries of surfaces by proper conventional lines depending upon their visibility.

ii.             Perspective views of lines touching the PPP are of their true lengths and true inclinations.

iv.             Perspective views of horizontal lines, parallel to each other and inclined to the PPP; converge into a single point, which is the front view of the vanishing point.