Some areas of the cerebral cortex can be assigned specific functions.

Some areas of the cerebral cortex can be assigned specific functions. These areas can be defined in terms of sulci and gyri described in preceding pages. However, some areas are commonly referred to by numbers and it is necessary to know what these numbers mean. Various workers who have studied the microscopic structure of the cerebral cortex have found that there is considerable variation from region to region. They have also found that these variations do not necessarily follow the boundaries of sulci and gyri, but often cut across them. Various authors have worked out ‘maps’ of the cerebral cortex indicating areas of differing structure. The best known scheme is that of Brodmann who represented different areas by numbers. Although the functional significance of the areas is open to question, areas of the cortex are very frequently referred to by Brodmann’s numbers. It is, therefore, necessary to be familiar with them. The numbers most commonly referred to are indicated in Fig. 8.10 A, B. 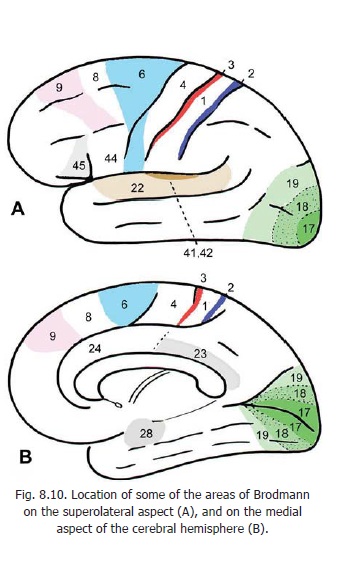 The concepts regarding the different functional areas of the cerebral cortex have undergone considerable modification in recent years, but in clinical work reference continues to be made to classical subdivisions which are as follows.

The motor area of classical description is located in the precentral gyrus on the superolateral surface of the hemisphere (Fig. 8.11), and in the anterior part of the paracentral lobule on the medial surface. It corresponds to area 4 of Brodmann (and possibly to the part of area 6 which lies in the precentral gyrus, Fig. 8.10). Specific regions within the area are responsible for movements in specific parts of the body.

Another feature of interest is that the area of cortex representing a part of the body is not proportional to the size of the part, but rather to intricacy of movements in the region. Thus relatively large areas of cortex are responsible for movements in the hands or in the lips.

Closely related to the premotor area there are two specific areas of importance. One is the motor speech area of Broca, mentioned above; and the other is the frontal eye field.

The motor speech area of Broca lies in the inferior frontal gyrus (areas 44 & 45, Figs. 8.10A, 15.4). Injury to this region results in inability to speak (aphasia) even though the muscles concerned are not paralysed. These effects occur only if damage occurs in the left hemisphere in right handed persons; and in the right hemisphere in left handed persons. In other words motor control of speech is confined to one hemisphere: that which controls the dominant upper limb.

The frontal eye field lies in the middle frontal gyrus just anterior to the precentral gyrus (Fig. 15.4). It includes parts of areas 6, 8, and 9. Stimulation of this area causes both eyes to move to the opposite side. These are called conjugate movements. Movements of the head and dilatation of the pupil may also occur. This area is connected to the cortex of the occipital lobe that is concerned with vision. It is also connected to the thalamus (medial dorsal nucleus).

The sensory area of classical description is located in the postcentral gyrus (Fig. 8.11). It corresponds to areas 1, 2, and 3 of Brodmann. It also extends onto the medial surface of the hemisphere where it lies in the posterior part of the paracentral lobule. Responses can be recorded from the sensory area when individual parts of the body are stimulated.

A definite representation of various parts of the body can be mapped out in the sensory area. It corresponds to that in the motor area in that the body is represented upside down. The area of cortex that receives sensations from a particular part of the body is not proportional to the size of that part, but rather to the complexity of sensations received from it. Thus the digits, the lips and the tongue have a disproportionately large representation.

The areas concerned with vision are located in the occipital lobe, mainly on the medial surface, both above and below the calcarine sulcus (area 17). Area 17 extends into the cuneus, and into the lingual gyrus (Fig. 8.10). Posteriorly, it may extend onto the superolateral surface where it is limited (anteriorly) by the lunate sulcus. Area 17 is continuous, both above and below, with area 18 and beyond this with area 19. Areas 18 and 19 are responsible mainly for interpretation of visual impulses reaching area 17: they are often described as psychovisual areas. 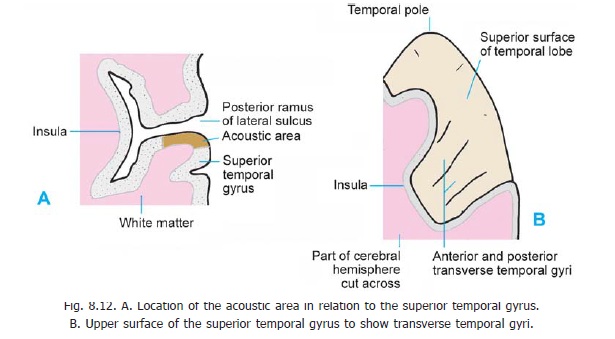