Anomalies of the Brain and the Spinal Cord 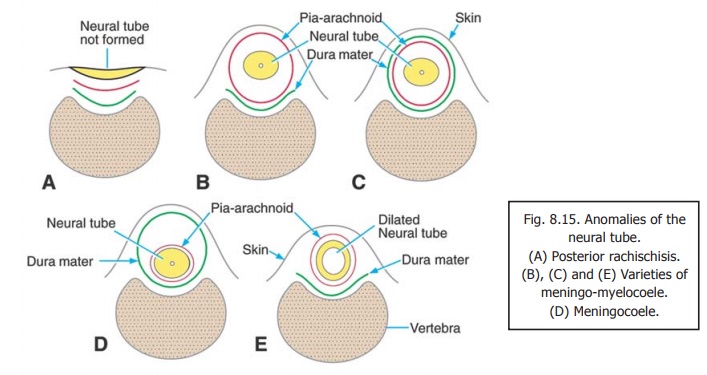 ANOMALIES OF THE BRAIN AND THE SPINAL CORD

2.              Anencephaly: The neural tube remains open in the region of the brain. The exposed braintissue degenerates. 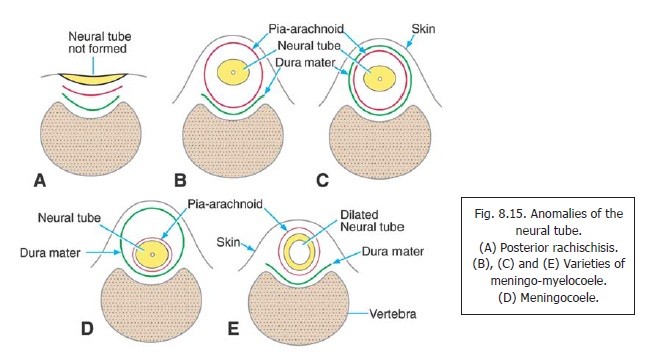 Note the following facts about anencephaly.

As a result of non-fusion of the neural tube, or of overlying bones (e.g. spina bifida), neural tissue may lie outside the cranial cavity or vertebral canal. When this happens in the region of the brain the condition is called encephalocoele, and when it occurs in the spinal region it is called myelocoele (Figs. 8.15B, C).

2.              When the neural tube has closed, and the outward bulging is a result of a defect in the overlying bones, the neural tissue is covered by bulging skin and membranes (meningo-mylocoele) (Figs. 8.15B, C, E). The corresponding condition in the region of the skull is meningo-encephalocoele

3.              Occasionally the bulging is caused by the membranes alone (meningocoele), the neural tissue being normally located (Fig. 8.15D). Some varieties of these conditions are illustrated in Figs. 8.15B to E.

When a meningoencephalocoele is present, the medulla oblongata, and the tonsils of the cerebellum, are displaced caudally into the foramen magnum causing obstruction to the flow of cerebrospinal fluid. This leads to hydrocephalus. These conditions together constitute the Arnold Chiari deformity.

An abnormal quantity of cerebrospinal fluid may accumulate in the ventricular system of the brain (hydrocephalus). This may be due to a blockage to its flow or to excessive production. The ventricles become very large and the infant is born with a large head. The pressure of the fluid causes degeneration of nervous tissue. Similar enlargement of the spinal cord is called hydromyelia; the enlargement of the central canal being called syringocoele. This condition may be associated with the formation of abnormal cavities near the central canal (syringomyelia). Destruction of nervous tissue at this site results in a characteristic syndrome.

In one form of hydrocephalus resulting from blockage of the median and lateral apertures of the fourth ventricle, the enlargement is predominantly in the posterior cranial fossa, and the cerebellum is abnormal (Dandy Walker syndrome). Obstruction to flow of cerebrospinal fluid may also be caused by stenosis or malformation of the cerebral aqueduct.

The brain may be too small (microcephaly) or too large (macrocephaly). Gyri may be absent or may be poorly formed. Faulty development of the cerebral cortex may lead to impaired intelligence or in congenital paralysis.

Absence of Parts of the Nervous System

Parts of the nervous system may be absent. Absence of the corpus callosum, spinal cord or cerebellum is documented.