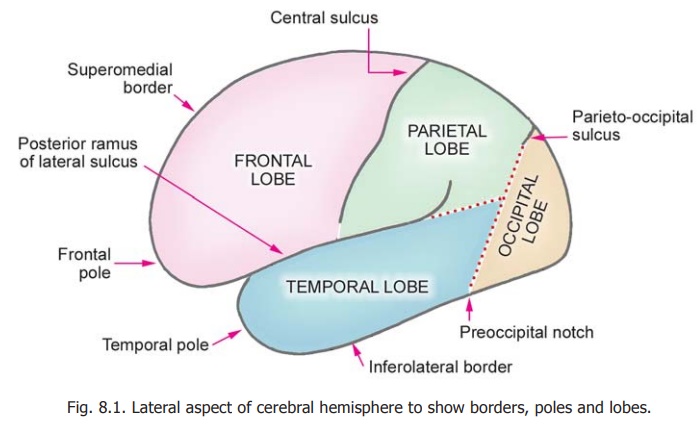 The cerebrum consists of two cerebral hemispheres that are partially connected with each other.

Gross Anatomy of The Cerebral Hemispheres

Exterior of the Cerebral Hemispheres

The cerebrum consists of two cerebral hemispheres that are partially connected with each other. When viewed from the lateral aspect each cerebral hemisphere has the appearance shown in Fig. 8.1. Three somewhat pointed ends or poles can be recognised. These are the frontal pole anteriorly, the occipital pole posteriorly, and the temporal pole that lies between the frontal and occipital poles,and points forwards and somewhat downwards. 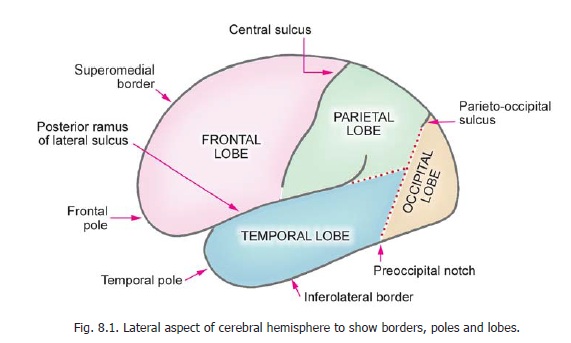 A coronal section through the cerebral hemispheres (Fig. 8.2) shows that each hemisphere has three borders: superomedial, inferolateral and inferomedial. These borders divide the surface of the hemisphere into three large surfaces: superolateral, medialand inferior. The inferior surface is further subdivided into an anterior orbital part and a posterior tentorial part. (Fig. 8.3). 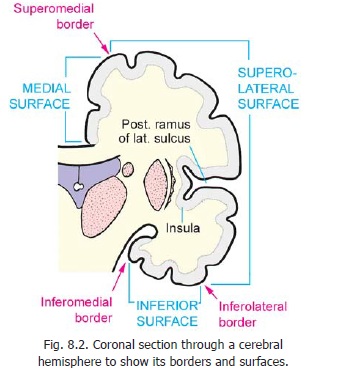 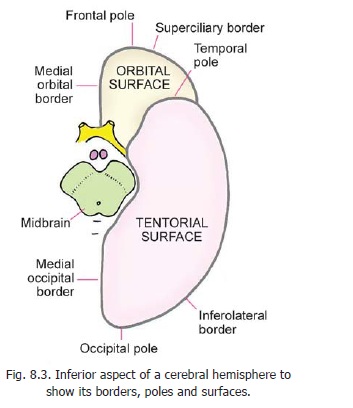 The surfaces of the cerebral hemisphere are not smooth. They show a series of grooves or sulci which are separated by intervening areas that are called gyri.

For convenience of description each cerebral hemisphere is divided into four major subdivisions or lobes. To consider the boundaries of these lobes reference has to be made to some sulci and otherfeatures to be seen on each hemisphere (Fig. 8.1). 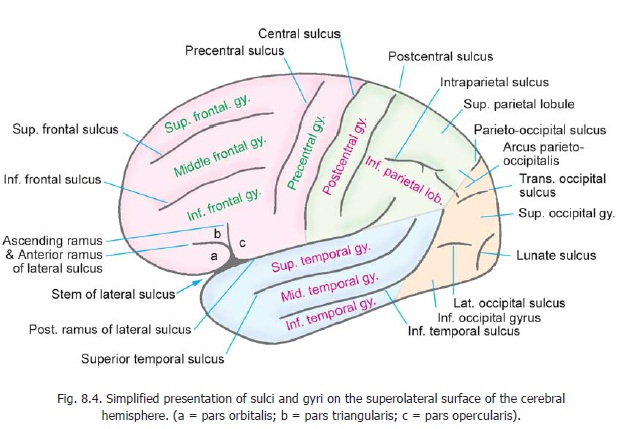 a.              On the superolateral surface of the hemisphere there are two prominent sulci. One of these is the posterior ramus of the lateralsulcus which begins near the temporal pole andruns backwards and slightly upwards. Its posteriormost part curves sharply upwards. The second sulcus that is used to delimit the lobes is the central sulcus. It begins on the superomedial margin a little behind the midpoint between the frontal and occipital poles, and runs downwards and forwards to end a little above the posterior ramus of the lateral sulcus.

b.              On the medial surface of the hemisphere, near the occipital pole, there is a sulcus called the parietooccipital sulcus (Fig. 8.5). The upperend of this sulcus reaches the superomedial border and a small part of it can be seen on the superolateral surface (Fig. 8.1). 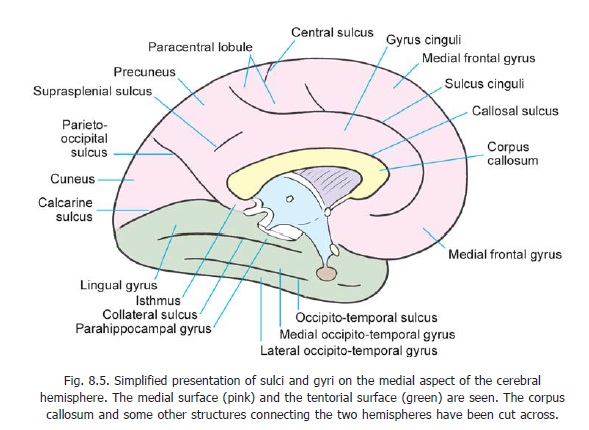 To complete the subdivision of the hemisphere into lobes we now have to draw two imaginary lines. The first imaginary line connects the upper end of the parieto-occipital sulcus to the preoccipital notch. The second imaginary line is a backward continuation of the posterior ramus of the lateral sulcus (excluding the posterior upturned part) to meet the first line. We are now in a position to define the limits of the various lobes as follows.

1.              The frontal lobe lies anterior to the central sulcus, and above the posterior ramus of the lateral sulcus.

2.              The parietal lobe lies behind the central sulcus. It is bounded below by the posterior ramus of the lateral sulcus and by the second imaginary line; and behind by the upper part of the first imaginary line.

4.              The temporal lobe lies below the posterior ramus of the lateral sulcus and the second imaginary line. It is separated from the occipital lobe by the lower part of the first imaginary line.

Before going on to consider further subdivisions of each of the lobes named above, attention has to be directed to details of some structures already mentioned. 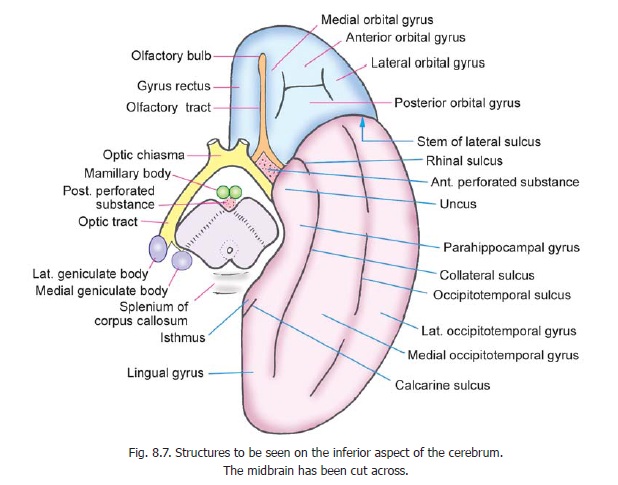 b.              The lateral sulcus begins on the inferior aspect of the cerebral hemisphere where it lies between the orbital surface and the anterior part of the temporal lobe (Fig. 8.7). It runs laterally to reach the superolateral surface. On reaching this surface it divides into three rami (branches). These rami are anterior (or anterior horizontal), ascending (or anterior ascending) and posterior (Fig.8.4). The anterior and ascending rami are short and run into the frontal lobe in the directions indicated by their names. The posterior ramus has already been considered. Unlike most other sulci, the lateral sulcus is very deep. Its walls cover a fairly large area of the surface of the hemisphere called the insula (Fig. 8.2).

Further Subdivisions of the Superolateral Surface

The subdivisions of the superolateral surface are described below and are shown in Fig. 8.4.

When the two cerebral hemispheres are separated from each other by a cut in the midline the appearances seen are shown in Figs. 8.5 and 8.6. 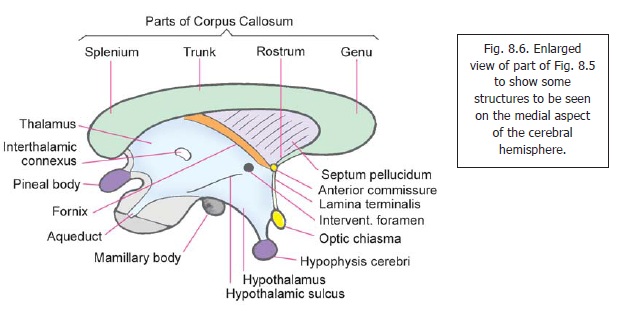 The structures seen are as follows.

ventricle of the brain. A number of structures can be identified in relation to this ventricle. The interventricular foramen through which the third ventricle communicates with the lateral ventriclecan be seen in the upper and anterior part. Posteroinferiorly, the ventricle is continuous with the cerebral aqueduct. The lateral wall of the ventricle is formed in greater part by a large mass ofgrey matter called the thalamus. The right and left thalami are usually interconnected (across the midline) by a strip of grey matter called the interthalamic connexus. The anteroinferior part of the lateral wall of the third ventricle is formed by a collection of grey matter that constitutes the hypothalamus.

Above the thalamus there is a bundle of fibres called the fornix. Posteriorly, the fornix is attached to the under surface of the corpus callosum, but anteriorly it disappears from view just in front of the interventricular foramen. Extending between the fornix and the corpus callosum there is a thin lamina called the septum pellucidum (or septum lucidum), which separates the right and left lateral ventricles from each other. Removal of the septum pellucidum brings the interior of the lateral ventricle into view.

The part of the medial surface of the hemisphere between the cingulate sulcus and the superomedial border consists of two parts. The smaller posterior part which is wound around the end of the central sulcus is called the paracentral lobule. The large anterior part is called the medial frontal gyrus. These two parts are separated by a short sulcus continuous with the cingulate sulcus.

The part of the medial surface behind the paracentral lobule and the gyrus cinguli shows two major sulci that cut off a triangular area called the cuneus. The triangle is bounded anteriorly and above by the parieto-occipital sulcus; inferiorly by the calcarine sulcus; and posteriorly by the superomedial border of the hemisphere. The calcarine sulcus extends forwards beyond its junction with the parieto-occipital sulcus and ends a little below the splenium of the corpus callosum. The small area separating the splenium from the calcarine sulcus is called the isthmus. Between the parieto-occipital sulcus and the paracentral lobule there is a quadrilateral area called the precuneus. Anteroinferiorly the precuneus is separated from the posterior part of the gyrus cinguli by the suprasplenial (orsubparietal) sulcus.

The precuneus and the posterior part of the paracentral lobule form the medial surface of the parietal lobe.

Although the parieto-occipital and calcarine sulci appear to be continuous with each other on surface view, they are separated by the cuneate gyrus (or cuneolingual gyrus) which lies in the depth of the area where the two sulci meet. The parts of the calcarine sulcus anterior and posterior to the junction with the parieto-occipital sulcus are separated by a deeply situated anterior cuneolingualgyrus.