Home | | Human Neuroanatomy(Fundamental and Clinical) | An Introduction to Some Structures within the Cerebral Hemispheres
Posted On :  23.07.2017 12:04 am

An Introduction to Some Structures within the Cerebral Hemispheres 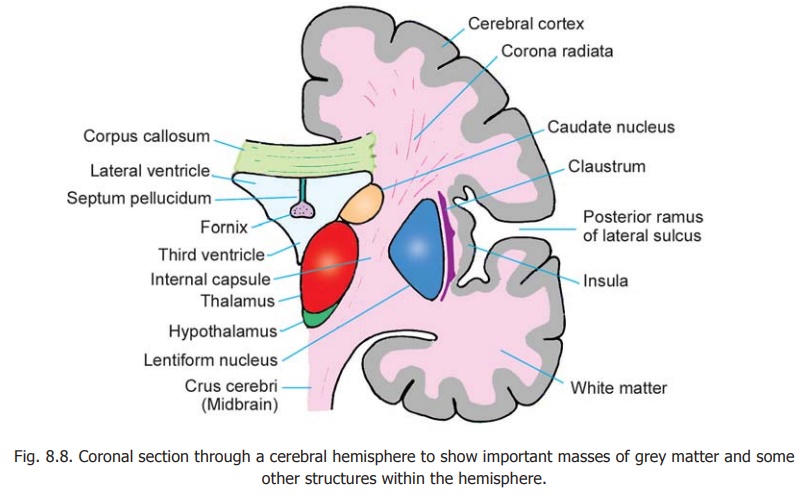 The surface of the cerebral hemisphere is covered by a thin layer of grey matter called the cerebralcortex.

AN INTRODUCTION TO SOME STRUCTURES WITHIN THE CEREBRAL HEMISPHERES

The greater part of the cerebral hemisphere deep to the cortex is occupied by white matter within which are embedded certain important masses of grey matter. Immediately lateral to the third ventricle 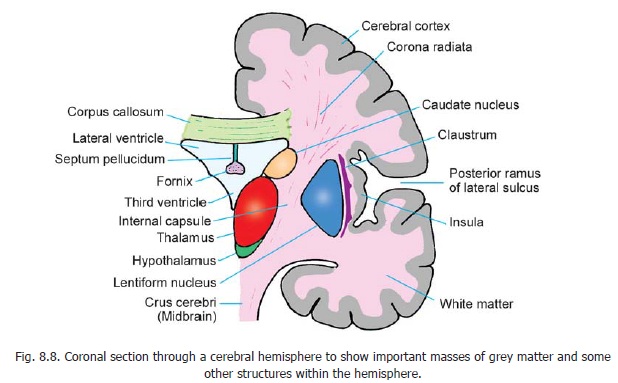 The white matter that occupies the interval between the thalamus and caudate nucleus medially, and the lentiform nucleus laterally, is called the internal capsule. It is a region of considerable importance as major ascending and descending tracts pass through it. The white matter that radiates from the upper end of the internal capsule to the cortex is called the corona radiata.

The two cerebral hemispheres are interconnected by fibres passing from one to the other. These fibres constitute thecommissures of the cerebrum. The largest of these is the corpus callosum which is seen just above the lateral ventricles in Fig. 8.8.