It should be emphasized that the philosophy behind this standard seeks to limit the harmonic injection from individual customers so that they do not create unacceptable voltage distortion under normal system characteristics and to limit the overall harmonic distortion in the voltage supplied by the utility. The voltage and current distortion limits should be used as system design values for the worst case of normal operating conditions lasting more than 1 h. For shorter periods, such as during start-ups, the limits may be exceeded by 50 percent.

The harmonic current and voltage limits are applied at the PCC. This is the point where other customers share the same bus or where new customers may be connected in the future. The standard seeks a fair approach to allocating a harmonic limit quota for each customer. The standard allocates current injection limits based on the size of the load with respect to the size of the power system, which is defined by its short-circuit capacity. The short-circuit ratio is defined as the ratio of the maximum short-circuit current at the PCC to the maxi mum demand load current (fundamental frequency component) at the PCC as well.

The two main conditions that result in high impedance are when the system is too weak to supply the load adequately or the system is in resonance. The latter is more common. Therefore, keeping the voltage distortion low usually means keeping the system out of resonance. Occasionally, new transformers and lines will have to be added to increase the system strength. IEEE Standard 519-1992 represents a consensus of guidelines and recommended practices by the utilities and their customers in minimizing and controlling the impact of harmonics generated by nonlinear loads.

1. Overview of IEC standards on harmonics

The International Electro technical Commission (IEC), currently with headquarters in Geneva, Switzerland, has defined a category of electromagnetic compatibility (EMC) standards that deal with power quality issues. The term electromagnetic compatibility includes concerns for both radiated and conducted interference with end-use equipment. The IEC standards are broken down into six parts:

■   Part 1: General. These standards deal with general considerations such as introduction, fundamental principles, rationale, definitions, and terminologies. They can also describe the application and interpretation of fundamental definitions and terms. Their designation number is IEC 61000-1-x.

■    Part 2: Environment. These standards define characteristics of the environment where equipment will be applied, the classification of such environment, and its compatibility levels. Their designation number is IEC 61000-2-x.

■    Part 3: Limits. These standards define the permissible levels of emissions that can be generated by equipment connected to the environment. They set numerical emission limits and also immunity limits. Their designation number is IEC 61000-3-x.

■  Part 4: Testing and measurement techniques. These standards provide detailed guidelines for measurement equipment and test procedures to ensure compliance with the other parts of the standards. Their designation number is IEC 61000-4-x.

■    Part 5: Installation and mitigation guidelines. These standards provide guidelines in application of equipment such as ear thing and cabling of electrical and electronic systems for ensuring electromagnetic compatibility among electrical and electronic apparatus or systems. They also describe protection concepts for civil facilities against the high-altitude electromagnetic pulse (HEMP) due to high altitude nuclear explosions. They are designated with IEC 61000-5- x.

■ Part 6: Miscellaneous. These standards are generic standards defining immunity and emission levels required for equipment in general categories or for specific types of equipment.

IEC 61000-2-2 defines compatibility levels for low-frequency conducted disturbances and signaling in public low-voltage power supply systems such as 50- or 60-Hz single- and three-phase systems with nominal voltage up 240 and 415 V, respectively. Compatibility levels are defined empirically such that they reduce the number of complaints of mis operation to an acceptable level.15 these levels are not rigid and can be exceeded in a few exceptional conditions. Compatibility levels for individual harmonic voltages in the low-voltage network are shown in Table 6.7. They are given in percentage of the fundamental voltage.

Both IEC 61000-3-2 and 61000-3-4 define limits for harmonic current emission from equipment drawing input current of up to and including 16 Aper phase and larger than 16 Aper phase, respectively. These standards are aimed at limiting harmonic emissions from equipment connected to the low-voltage public network so that compliance with the limits ensures that the voltage in the public network satisfies the compatibility limits defined in IEC 61000-2-2. The IEC 61000-3-2 is an outgrowth from IEC 555-2 (EN 60555-2). The standard classifies equipment into four categories:

■ Class A: Balanced three-phase equipment and all other equipment not belonging to classes B, C, and D

■ Class D: Equipment having an input current with a “special wave shape” and an active input power of less than 600 W 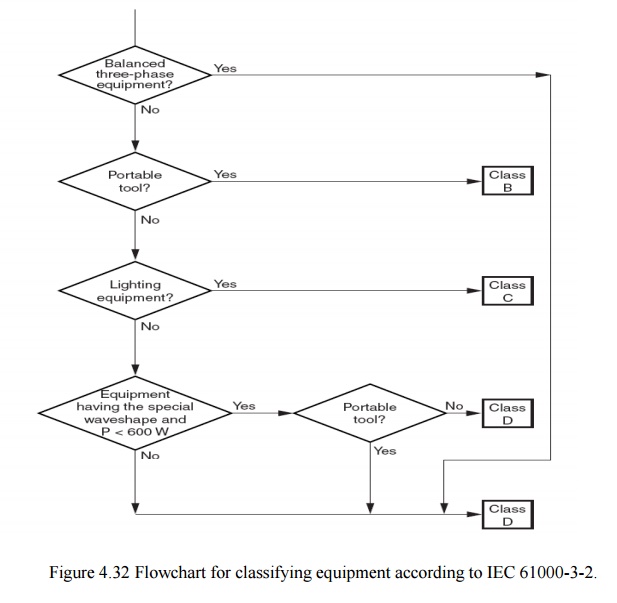