Commercial facilities such as office complexes, department stores, hospitals, and Internet data centers are dominated with high-efficiency fluorescent lighting with electronic ballasts, adjustable-speed drives for the heating, ventilation, and air conditioning (HVAC) loads, elevator drives, and sensitive electronic equipment supplied by single-phase switch-mode power supplies. Commercial loads are characterized by a large number of small harmonic-producing loads. Depending on the diversity of the different load types, these small harmonic currents may add in phase or cancel each other. The voltage distortion levels depend on both the circuit impedances and the overall harmonic current distortion. Since power factor correction capacitors are not typically used in commercial facilities, the circuit impedance is dominated by the service entrance transformers and conductor impedances. Therefore, the voltage distortion can be estimated simply by multiplying the current by the impedance adjusted for frequency. Characteristics of typical nonlinear commercial loads are detailed in the following sections.

Electronic power converter loads with their capacity for producing harmonic currents now constitute the most important class of nonlinear loads in the power system. Advances in semiconductor device technology have fueled a revolution in power electronics over the past decade, and there is every indication that this trend will continue. Equipment includes adjustable-speed motor drives, electronic power supplies, dc motor drives, battery chargers, electronic ballasts, and many other rectifier and inverter applications.

A major concern in commercial buildings is that power supplies for single-phase electronic equipment will produce too much harmonic current for the wiring. DC power for modern electronic and microprocessor- based office equipment is commonly derived from single-phase full-wave diode bridge rectifiers. The percentage of load that contains electronic power supplies is increasing at a dramatic pace, with the increased utilization of personal computers in every commercial sector.

There are two common types of single-phase power supplies. Older technologies use ac-side voltage control methods, such as transformers, to reduce voltages to the level required for the dc bus. The inductance of the transformer provides a beneficial side effect by smoothing the

input current waveform, reducing harmonic content. Newer-technology switch-mode supplies (see Fig. 4.5) use dc-to-dc conversion techniques to achieve a smooth dc output with small, lightweight components. The input diode bridge is directly connected to the ac line, eliminating the transformer. This results in a coarsely regulated dc voltage on the capacitor. This direct current is then converted back to alternating current at a very high frequency by the switcher and subsequently rectified again. Personal computers, printers, copiers, and most other single-phase electronic equipment now almost universally employ switch-mode power supplies. The key advantages are the light weight, compact size, efficient operation, and lack of need for a transformer. Switch-mode power supplies can usually tolerate large variations in input voltage.

Because there is no large ac-side inductance, the input current to the power supply comes in very short pulses as the capacitor C1 regains its charge on each half cycle. Figure 4.6 illustrates the current waveform and spectrum for an entire circuit supplying a variety of electronic equipment with switch-mode power supplies.

overloading of neutral conductors, especially in older buildings where an undersized neutral may have been installed. There is also a concern for transformer overheating due to a combination of harmonic content of the current, stray flux, and high neutral currents. 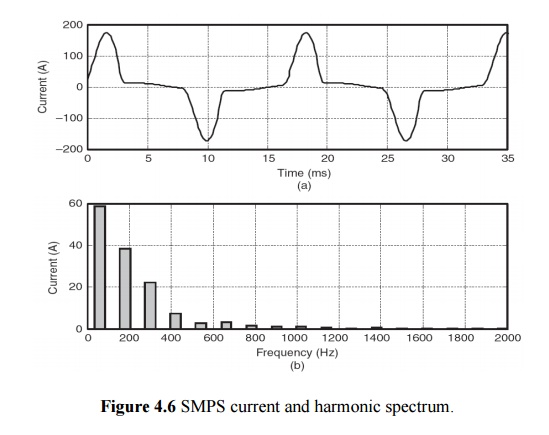 Lighting typically accounts for 40 to 60 percent of a commercial building load. According to the 1995 Commercial Buildings Energy Consumption study conducted by the U.S. Energy Information Administration, fluorescent lighting was used on 77 percent of commercial floor spaces, while only 14 percent of the spaces used incandescent lighting.1 Fluorescent lights are a popular choice for energy savings.

Fluorescent lights are discharge lamps; thus they require a ballast to provide a high initial voltage to initiate the discharge for the electric current to flow between two electrodes in the fluorescent tube. Once the discharge is established, the voltage decreases as the arc current increases. It is essentially a short circuit between the two electrodes, and the ballast has to quickly reduce the current to a level to maintain the specified lumen output. Thus, a ballast is also a current-limiting device in lighting applications.

There are two types of ballasts, magnetic and electronic. A standard magnetic ballast is simply made up of an iron-core transformer with a capacitor encased in an insulating material. A single magnetic ballast can drive one or two fluorescent lamps, and it perates at the line fundamental frequency, i.e., 50 or 60 Hz. The iron-core magnetic ballast contributes additional heat losses, which makes it inefficient compared to an electronic ballast.

An electronic ballast employs a switch-mode–type power supply to convert the incoming fundamental frequency voltage to a much higher frequency voltage typically in the range of 25 to 40 kHz. This high frequency has two advantages. First, a small inductor is sufficient to limit the arc current. Second, the high frequency eliminates or greatly reduces the 100- or 120-Hz flicker associated with an iron-core magnetic ballast.

Standard magnetic ballasts are usually rather benign sources of additional harmonics themselves since the main harmonic distortion comes from the behavior of the arc. Figure 4.7 shows a measured fluorescent lamp current and harmonic spectrum. The current THD is a moderate 15 percent. As a comparison, electronic ballasts, which employ switch-mode power supplies, can produce double or triple the standard magnetic ballast harmonic output. Figure 4.8 shows a fluorescent lamp with an electronic ballast that has a current THD of 144.

A current THD greater than 32 percent is considered excessive according to ANSI C82.11-1993, High-Frequency Fluorescent Lamp Ballasts. Most electronic ballasts are equipped with passive filtering to reduce the input current harmonic distortion to less than 20 percent. 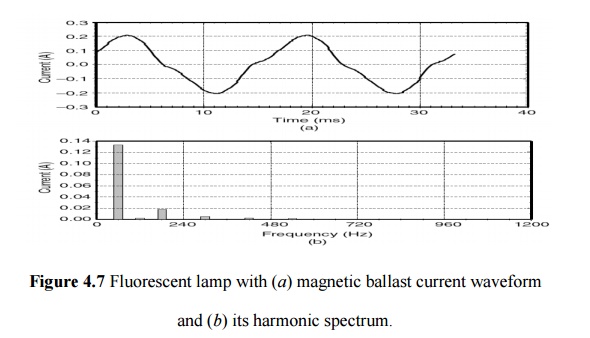 Since fluorescent lamps are a significant source of harmonics in commercial buildings, they are usually distributed among the phases in a nearly balanced manner. With a delta-connected supply transformer, this reduces the amount of triplen harmonic currents flowing onto the power supply system. 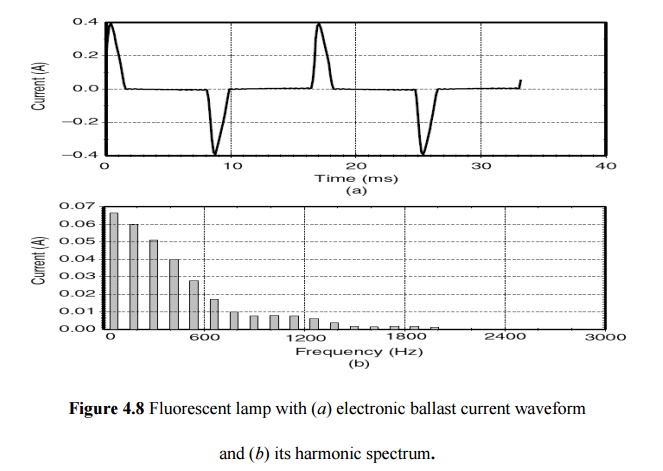 3. Adjustable-speed drives for HVAC and elevators