The interaction often gives rise to voltage and current harmonic distortion observed in many places in the system. Therefore, to limit both voltage and current harmonic distortion, IEEE Standard 519-19922 proposes to limit harmonic current injection from end users so that harmonic voltage levels on the overall power system will be acceptable if the power system does not inordinately accentuate the harmonic currents. This approach requires participation from both end users and utilities.1–3

1. End users. For individual end users, IEEE Standard 519-1992 limits the level of harmonic current injection at the point of common coupling (PCC). This is the quantity end users have control over. Recommended limits are provided for both individual harmonic components and the total demand distortion. The concept of PCC is illustrated in Fig. 4.25. These limits are expressed in terms of a percentage of the end user’s maximum demand current level, rather than as a percentage of the fundamental. This is intended to provide a common basis for evaluation over time.

2. The utility. Since the harmonic voltage distortion on the utility system arises from the interaction between distorted load currents and the utility system impedance, the utility is mainly responsible for limiting the voltage distortion at the PCC. The limits are given for the maximum individual harmonic components and for the total harmonic distortion (THD). These values are expressed as the percentage of the fundamental voltage. For systems below 69 kV, the THD should be less than 5 percent. Sometimes the utility system impedance at harmonic frequencies is determined by the resonance of power factor correction capacitor banks. This results in a very high impedance and high harmonic voltages. Therefore, compliance with IEEE Standard 519-1992 often means that the utility must ensure that system resonances do not coincide with harmonic frequencies present in the load currents. Thus, in principle, end users and utilities share responsibility for limiting harmonic current injections and voltage distortion at the PCC. Since there are two parties involved in limiting harmonic distortions, the evaluation of harmonic distortion is divided into two parts: measurements of the currents being injected by the load and calculations of the frequency response of the system impedance. Measurements should be taken continuously over a sufficient period of time so that time variations and statistical characteristics of the harmonic distortion can be accurately represented. Sporadic measurements should be avoided since they do not represent harmonic characteristics accurately given that harmonics are a continuous phenomenon. The minimum measurement period is usually 1 week since this provides a representative loading cycle for most industrial and commercial loads.

1. Concept of point of common coupling 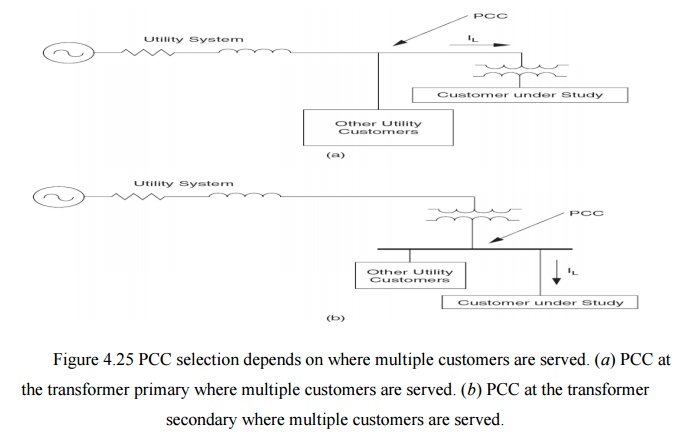 Evaluations of harmonic distortion are usually performed at a point between the end user or customer and the utility system where another customer can be served. This point is known as the point of common coupling.1

2. Harmonic evaluations on the utility system

Note that the definition of the total harmonic distortion in Table 4.1 is slightly different than the conventional definition. The THD value in this table is expressed as a function of the nominal system rms voltage rather than of the fundamental frequency voltage magnitude at the time of the measurement. The definition used here allows the evaluation of the voltage distortion with respect to fixed limits rather than limits that fluctuate with the system voltage. A similar concept is applied for the current limits.

There are two important components for limiting voltage distortion levels on the overall utility system:

1. Harmonic currents injected from individual end users on the system must be limited. These currents propagate toward the supply source through the system impedance, creating voltage distortion. Thus by limiting the amount of injected harmonic currents, the voltage distortion can be limited as well. This is indeed the basic method of controlling the overall distortion levels proposed by IEEE Standard 519- 1992.

The overall procedure for utility system harmonic evaluation is described here. This procedure is applicable to both existing and planned installations. Figure 4.26 shows a flowchart of the evaluation procedure.

1.     Characterization of harmonic sources. Characteristics of harmonic sources on the system are best determined with measurements for existing installations. These measurements should be performed at facilities suspected of having offending nonlinear loads. The duration of measurements is usually at least 1 week so that all the cyclical load variations can be captured. For new or planned installations, harmonic characteristics provided by manufacturers may suffice. 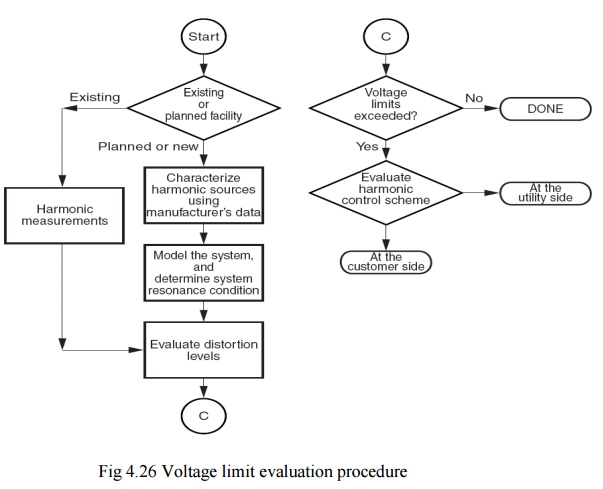 2.   System modeling. The system response to the harmonic currents injected at end-user locations or by nonlinear devices on the power system is determined by developing a computer model of the system.

3.    System frequency response. Possible system resonances should be determined by a frequency scan of the entire power delivery system. Frequency scans are performed for all capacitor bank configurations of interest since capacitor configuration is the main variable that will affect the resonant frequencies.

Evaluate expected distortion levels. Even with system resonance close to characteristic harmonics, the voltage distortion levels around the system may be acceptable. On distribution systems, most resonances are significantly damped by the resistances on the system, which reduces magnification of the harmonic currents. The estimated harmonic sources are used with the system configuration yielding the worst-case frequency-response characteristics to compute the highest expected harmonic distortion. This will indicate whether or not harmonic mitigation measures are necessary.

5. Evaluate harmonic control scheme. Harmonic control options consist of controlling the harmonic injection from nonlinear loads, changing the system frequency-response characteristics, or blocking the flow of harmonic currents by applying harmonic filters. Design of Passive filters for some systems can be difficult because the system characteristics are constantly changing as loads vary and capacitor banks are switched.

Harmonic problems are more common at end-user facilities than on the utility supply system. Most nonlinear loads are located within end-user facilities, and the highest voltage distortion levels occur close to harmonic sources. The most significant problems occur when there are nonlinear loads and power factor correction capacitors that result in resonant conditions. IEEE Standard 519-1992 establishes harmonic current distortion limits at the PCC. The limits, summarized in Table 4.2, are dependent on the customer load in relation to the system short-circuit capacity at the PCC.

The variables and additional restrictions to the limits given in Table 4.2 are:

ü   ISC is the short-circuit current at the PCC.

ü   IL is the fundamental component of the maximum demand load current at the PCC. It can be calculated as the average of the maximum monthly demand currents for the previous 12 months or it may have to be estimated.

ü   Current distortion which results in a dc offset at the PCC is not allowed.

ü   If the harmonic-producing loads consist of power converters with pulse number q higher than 6, the limits indicated in Table 6.2 are increased by a factor equal to √ q/6 .

In computing the short-circuit current at the PCC, the normal system conditions that result in minimum short-circuit capacity at the PCC should be used since this condition results in the most severe system impacts.

A procedure to determine the short-circuit ratio is as follows:

ü   Determine the three-phase short-circuits duty ISC at the PCC. This value may be obtained directly from the utility and expressed in amperes. If the short-circuit duty is given in mega volt amperes, convert it to an amperage value using the following expression:

ü   Find the load average kilowatt demand PD over the most recent 12months. This can be found from billing information.

where PF is the average billed power factor.

ü   The short-circuit ratio is now determined by:

This is the short-circuit ratio used to determine the limits on harmonic currents in IEEE Standard 519-1992.

In some instances, the average of the maximum demand load current at the PCC for the previous 12 months is not available. In such circumstances, this value must be estimated based on the predicted load profiles. For seasonal loads, the average should be over the maximum loads only.