Charcot described a relationship between conversion phenom-ena and hypnotizability.

Charcot described a relationship between conversion phenom-ena and hypnotizability. He later incorrectly attributed both phenomena to a pathological process afflicting the central nerv-ous system. Charcot believed that only sick or hysterical people could be hypnotized. Others, including Bernheim, Janet and Breuer, refuted the idea. They attributed the symptoms of con-version to unconscious mechanisms and viewing hypnosis as a tool useful in both the elicitation and removal of such states. Research in hypnosis has lately been directed at understand-ing the relationship between hypnotizability and psychiatric illness.

Some psychiatric disorders are associated with high hyp-notizability scores (Table 72.5).

Several psychiatric syndromes (schizophrenia, general-ized anxiety disorder, and to a lesser extent major affective dis-order) (DSM-IV-TR) have been associated with generally lower hypnotic responsiveness. It may be that the primary illness process impairs the use of a patient’s natural capacity for hyp-notic concentration. Because of this, hypnotizability testing can sometimes be used to clarify diagnoses. As always, the presence or absence of hypnotic capacity should be interpreted within the context of the presentation, medical and psychiatric histories, and genetic background. In the case of an acute psychosis in which there is no familial background, the presentation is later in life than normal, there is a past history of physical or sexual abuse, and the patient has a high hypnotizability score, a diag-nosis of hysterical psychosis or a dissociative disorder should be strongly considered when the possibility of schizophrenia is evaluated (Spiegel and Fink, 1979; Steingard and Frankel, 1985). 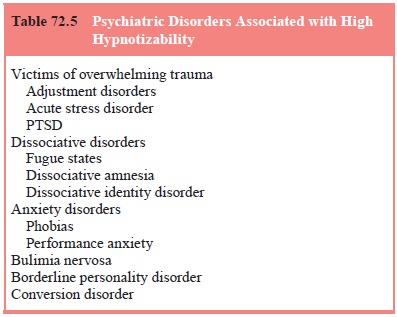