Applications of Hypnosis in Forensic Psychiatry

The most serious problem involves possible effects of hyp-nosis on memory.

The most serious problem involves possible effects of hyp-nosis on memory. There is evidence that hypnosis can distort memory in two ways: through confabulation, the creation of pseudomemories that are reported as real, or through concret-ing, an unwarranted increase in the confidence with which hyp-notized individuals report their memories, either true or false (McConkey, 1992; Orne et al., 1985; Spiegel and Spiegel, 1986; Spiegel and Vermutten, 1994). Hypnosis can facilitate the recall of dissociated memories, especially when recall is hampered by the strong affect associated with trauma (Kardiner and Spiegel, 1947; Spiegel, 1984, 1992). However, the research literature in-dicates that the most clearly reproducible problem is the produc-tion of confident errors, exaggerating the true value of memories unearthed in hypnosis.

This is especially a problem when the memories involve witnessing a crime and civil or criminal action in court is a pos-sibility. Most states prohibit the use of hypnotically induced testimony, but some prescribe witnesses who have been hypno-tized regarding the content of their potential testimony (Spiegel and Scheflin, 1994). If the possibility exists that a patient may be required to testify, it is wise to discuss the use of hypnosis with the patient and (with the patient’s permission) the patient’s attorney or the district attorney and obtain written agreement re-garding its use. If the patient is likely to be called to testify, the therapist should obtain electronic recording of all contact with the patient (preferably on videotape) so the court can examine for possible suggestive influences. Full guidelines for use of hypno-sis in the forensic setting include careful debriefing of the subject before hypnosis is employed, the use of nonleading questions, complete videotaping of all contact with the patient, and careful debriefing afterward (Spiegel and Spiegel, 1986).

The controversies surrounding so-called false memory syndrome have reignited questions regarding the validity of the material recovered by the use of hypnosis. One of the most com-mon applications of hypnosis in the court and legal settings had been refreshing recollection of witnesses and victims of crimes. Even though the current controversy focuses on the dangers of hypnotically induced confabulation or excessive confidence in memories (Diamond, 1980), there have been some positive results. A well-known example is the case involving the driver of a hijacked school bus in Chowchilla, California (People v. Schoenfeld, 1980). Under hypnosis, the bus driver was able to recall the license plate number of the car driven by the kidnap-pers. This information, not consciously available to him before hypnotic intervention, led to the arrest and conviction of the criminals.

Because hypnosis involves a suspension of critical judg-ment, and therefore a state of heightened suggestibility or re-sponsivity to social cues, it is important that the interview be conducted with a minimum of inserted information. To minimize the risk of contaminating subjects’ memories, it is important to use open-ended questions, such as, “What happens next?” rather than, “How did he sexually abuse you?”

Information retrieved with the aide of hypnosis may simply be the result of an additional recall trial (Erdelyi and Kleinbard, 1978), it may be new and true (Dywan and Bowers, 1983), or it may be a confabulation (Laurence and Perry, 1983). It may indeed be a combination of all three (Orne et al., 1985). As a result, courts have long been unwilling to admit the testimony of a person hypnotized while testifying and have also begun to exclude testimony of witnesses who have previously been hypno-tized about the event in question. Even when a subject is acting in good faith, hypnosis can amplify both truth and falsehood. A good guideline is that hypnosis increases the recovery of memo-ries, both true and confabulated.

On the other hand, people do dissociate during trauma, often failing to recall events despite being conscious at the time (Cardeña and Spiegel, 1993; Spiegel and Cardeña, 1991). There is evidence that such memory gaps may persist for years or even decades after such traumatic events as physical or sexual abuse (Williams, 1994).

Therapists treating victims of sexual abuse must be aware that the use of hypnosis may compromise the ability of a witness to testify in court. After much legal battling, some courts now allow witnesses to testify after the use of hypnosis provided that certain guidelines are followed (California Leg-islature, 1985). These relate primarily to the training and inde-pendence of the professional doing the hypnotic interrogation and the electronic recording of the entire process (Spiegel and Spiegel, 1986).

To address this controversial issue, the Council on Sci-entific Affairs of the American Medical Association convened a panel of experts to examine the research evidence relevant to this problem. The report issued by the panel concluded that the existing evidence indicates that the use of hypnosis tends to increase the productivity of witnesses, resulting in new memories, some of which are true and some of which are incor-rect (Orne et al., 1985). The panel recommended that careful guidelines similar to the ones adopted by the state of Califor-nia be followed when hypnosis is used in the forensic setting (Table 72.9). 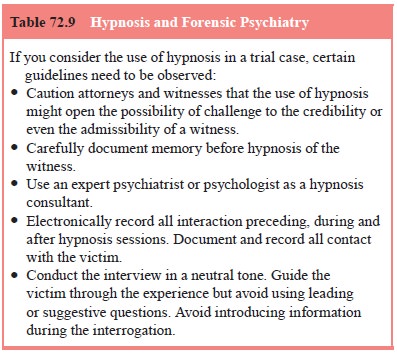 As a rule, it is advisable to caution attorneys and wit-nesses that the use of hypnosis might open the possibility of challenge to the credibility or even the admissibility of a wit-ness. The kind of situation in which hypnosis is most likely to be worth the risk is one in which there is a traumatic amnesia for the events of a crime or in which all other avenues of exploration have been exhausted. Hypnosis is by no means a truth serum, and the courts must weigh the effects of any hypnotic procedure on a witness.

The medico–legal aspects of the use of hypnosis in psychiatric practice have been discussed at length elsewhere (Maldonado and Spiegel, 2002a, 2002b).

Most outcome studies, of which there have been a number, have resulted in two main conclusions related to the therapeutic uses of hypnosis. First, there is no doubt that hypnosis is effective. Secondly, the degree of hypnotizability is predictive of treatment response (Spiegel et al., 1981b). It also has been observed that hypnosis is particularly useful and yields better results when it is specifically requested by the patient (Glick, 1970; Lazarus, 1973).