Several principles provide guidance for the use of hypnosis in medicine and psychiatry.

Several principles provide guidance for the use of hypnosis in medicine and psychiatry. We attempt to clarify some of the myths and misconceptions about hypnosis by establishing what hypno-sis is and what it is not (Table 72.2). 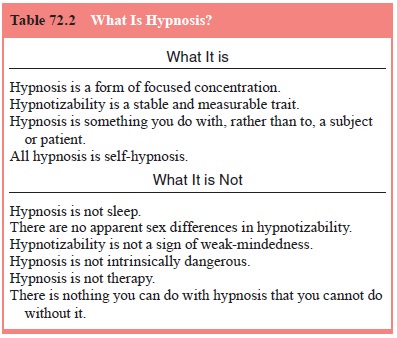 Hypnotizability is a Stable and Measurable Trait

A therapist inducing hypnosis is in the position of the Socratic teacher, helping students discover what they already know. A useful metaphor to share with subjects is that of a coach. A correctly performed hypnotic induction allows the patient and physician to assess and explore the patient’s hypnotic capac-ity or lack of it, just as a trainer assesses the athlete’s natural capacities and then attempts to maximize them. This approach tends to minimize power struggles between the physician and the patient. For example, there is less chance of misinterpret-ing a patient’s inability to experience a hypnotic trance as resistance.

All Hypnosis is Self-hypnosis

The therapist helps the patient use his or her own hypnotic ca-pacity to undergo a trance state. Helping patients to understand the degree of control they have over their mental processes is a good way to foster mastery and control. By doing this, patients may be able to comprehend the extent to which the unconscious use of their hypnotic abilities may create or contribute to their psychiatric symptoms, as in the case of dissociative disorders (Bliss, 1980, 1984; Spiegel, 1974; Spiegel and Fink, 1979). Simi-larly, hypnosis may help patients understand how certain physi-cal symptoms may have unconscious etiological factors, as in the case of conversion phenomena (i.e., psychogenic blindness, pseu-doseizures) or psychosomatic conditions (i.e., asthma, headache) (Maldonado and Spiegel, 2000).

There are no Apparent Sex Differences in Hypnotizability

Hypnosis is Not Sleep

We know that a hypnotic trance requires an intact capacity for focused concentration. If anything, high hypnotizability is as-sociated with the absence of serious psychotic and neurological disorders (Lavoie and Sabourin, 1980; Pettinati, 1982; Spiegel et al., 1982).

Hypnosis is Not Intrinsically Dangerous

For the most part, it is a benign process. The same cognitive flexibility that allows patients to enter the trance facilitates their exit from it with clear structure and support from the thera-pist. The dangers of hypnosis lay not in the process itself but in how it is used. There are few contraindications for the use of hypnosis. A schizophrenic patient may incorporate an attempt at inducing hypnosis into a delusional system. A severely de-pressed individual may interpret a failure to benefit from hyp-nosis as further evidence of little self-worth. These problems can be avoided in part by use of hypnotizability testing at the beginning of the intervention. The most serious problem involves possible effects of hypnosis on memory.

Hypnosis is Not Therapy

Entry into a hypnotic state does not have any therapeutic effects of its own, although many find it pleasant and relaxing. Therapeutic change comes not from the state itself but from what happens during it. In this regard, hypnosis is not a treatment itself but rather a facilitator of a variety of treatment strategies. The state of intense concentration elicited in hypnosis can facilitate attention to a variety of strategies that enhance control over somatic function, reduce pain, allow the recovery and restructuring of memories, elicit the reproduction and control of conversion symptoms or fugue episodes, and provide control of dissociated states.

As an adjuvant to therapy, hypnosis may help speed the process by which information can be accessed and processed because of its ability to heighten concentration and focus attention; however, it is not a treatment in and of itself.

Study Material, Lecturing Notes, Assignment, Reference, Wiki description explanation, brief detail
Essentials of Psychiatry: Hypnosis : Hypnosis: What It is and What It is Not |