Increased concentration of specific lipoproteins in the plasma. Although ‘normal’ reference ranges exist even within this range, there is still a risk of developing complications. - Definition, Incidence, Aetiology, Pathophysiology, Clinical features, Complications, Investigations, Management, Prognosis.

Increased concentration of specific lipoproteins in the plasma. Although ‘normal’ reference ranges exist even within this range, there is still a risk of developing complications. 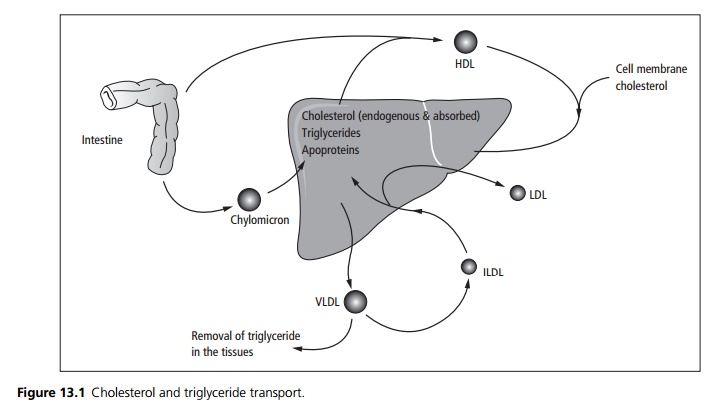 ·        Lipids are insoluble; they are absorbed from the small intestine as chylomicrons (a combination of triglyceride, cholesterol and apoproteins). These are then transported to the liver where the triglyceride is removed and the remaining cholesterol-containing particle is also taken up by the liver.

·        Most of these are broken down in the liver. Some are further depleted of triglyceride and are released as low-density lipoproteins (LDL) – the main cholesterol carrier.

·        High-density lipoproteins (HDL) from the intestine and the liver collect cholesterol from cell membranes in the tissue and transport it back to the liver.

Hyperlipidaemias are classified as primary and secondary (see Table 13.1). 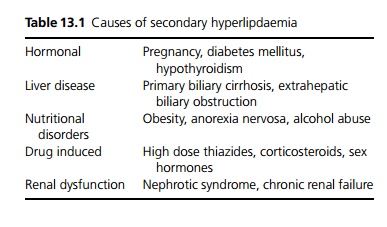 Primary hyperlipidaemia is a group of inherited conditions subdivided into those that cause hypertriglyceridaemia, hypercholesterolaemia and combined hyperlipidaemia.

The clinical signs of hypercholesterolaemia are premature corneal arcus, xanthelasmata and tendon xanthomata. Acute pancreatitis and eruptive xanthomata are features of hypertriglyceridaemia. More commonly it is diagnosed through targeted screening of high-risk patients (family history of hyperlipidaemia or coronary heart disease, hypertensive, diabetic and obese patients.

Random, non-fasting plasma cholesterol is used as a screen in low-risk populations. Full fasting lipid profile, including total, LDL and HDL cholesterol and triglyceride, is used if high cholesterol is found or in high-risk patients.

Lipid-lowering drugs include the following:

1.     Cholesterol-lowering drugs include resins, which sequestrate bile salts such as cholestyramine.

3.     Triglyceride-lowering drugs such as fish oils (omega-3 marine triglycerides) may be required.