Large plants can act as living pumps, pulling large amounts of water out of the ground which can be a useful property for some environmental applications.

Large plants can act as living pumps, pulling large amounts of water out of the ground which can be a useful property for some environmental applications, since the drawing of water upwards through the soil into the roots and out through the plant decreases the movement of soluble contaminants downwards, deeper into the site and into the groundwater. Trees are particularly useful in this respect because of their enormous transpiration pull and large root mass. Poplars, for example, once established, have very deep tap roots and they take up large quanti-ties of water, transpiring between 200 – 1100 litres daily. In situations where grass-land would normally support a water table at around 1.5 metres, this action can lead to it being up to 10 times lower. The aim of applying this to a contamination scenario is to create a functional water table depression, to which pollutants will tend to be drawn and from which they may additionally be taken up for treatment. This use of the water uptake characteristics of plants to control the migration of contaminants in the soil is termed hydraulic containment, shown schematically in Figure 7.1, and a number of particular applications have been developed. 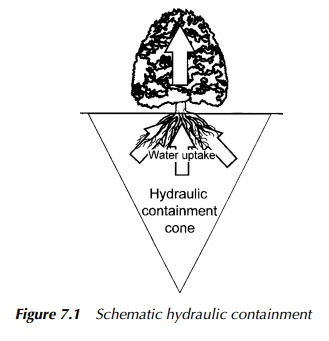 Buffer strips are intended to prevent the entry of contaminants into water-courses and are typically used along the banks of rivers, when they are sometimes called by the alternative name of ‘riparian corridors’, or around the perimeter of affected sites to contain migrating chemicals. Various poplar and willow varieties, for example, have shown themselves particularly effective in reducing the wash-out of nitrates and phosphates making them useful as pollution control measures to avoid agricultural fertiliser residues contaminating waterways. Part of the potential of this approach is that it also allows for the simultaneous integration of other of the phytoremediating processes described into a natural treatment train, since as previously stated, all plant-based treatments are aspects of the same fundamental processes and thus part of a cohesive whole.

Another approach sometimes encountered is the production of vegetative caps, which has found favour as a means of finishing off some American landfill sites. The principle involves planting to preventing the downward percolation of rain-water into the landfill and thus minimising leachate production while at the same time reducing erosion from the surface. The method seems to be successful as a living alternative to an impermeable clay or geopolymer barrier. The vegetative cap has also been promoted for its abilities to enhance the biological breakdown of the underlying refuse. In this respect, it may be seen as an applied form of rhi-zodegradation or even, arguably, of phytodegradation. How effective it is likely to be in this role, however, given the great depths involved in most landfills and the functionally anoxic conditions within them, appears uncertain.

To understand the overall phytoremediation effect of hydraulic containment, it is important to realise that contaminating organics are actually taken up by the plant at lower concentration than they are found in situ, in part due to membrane barriers at the root hairs. In order to include this in a predictive mathematical model, the idea of a transpiration stream concentration factor (TSCF) for given contaminants has been developed, defined as TSCF = 0.75 exp{−[(log Kow − 2.50)2/2.4]}, (Burken and Schnoor 1998) where Kow is the octanol – water par-tition coefficients. These latter are a measure of the hydrophobia or hydrophilia of a given organic chemical; a log Kow below 1 characterises the fairly soluble, while above 3.5 indicates highly hydrophobic substances.

Thus the uptake rate (U in mg/day) is given by the following equation:

However, it must also be remembered in this context that, should the pollutants not themselves actually be taken up by the plants, then the effect of establishing a hydraulic containment regime will be to increase their soil concentration due to transpiro-evaporative concentration. Thus, the mass of affected water in the contaminant plume reduces, as does the consequent level of dilution it offers and hence, increased localised concentration can result.

The transpiration pull of plants, and particularly tree species, has also some-times been harnessed to overcome localised water-logging, particularly on land used for agricultural or amenity purposes. To enhance the effect at the point worst affected, the planting regime may involve the establishment of close groupings, which then function as single elevated withdrawal points. The noted ability of poplars to act as solar-powered hydraulic pumps makes them of great potential benefit to this kind of phytotechnological application. Although other plant-based processes could be taking place at the same time to remediate land alongside this to clean up contaminated soils, this particular technique is not itself a type of phytoremediation. Instead, it is an example of the broader bioengineering possibilities which are offered by the appropriate use of flora species to wider environmental nuisances, which, for some sites, may be the only economic or practicable solution. This may be of particular relevance to heavy soils with poor natural interparticulate spacing, since laying adequate artificial drainage systems can often be expensive to do in the first place and are frequently prone to collapse once installed.

Another similar example of the use of phytotechnology to overcome nuisance is the bio-bund, which consists of densely planted trees, often willows, on an engineered earthwork embankment. This system has been used successfully to reduce noise pollution from roads, railways and noisy industrial sites, the inter-locking branches acting as a physical barrier to deaden the sound as well as having a secondary role in trapping wind-blown particulates. Depending on the individual site, the bio-bund can be constructed in such a way that it can also act as a buffer strip to control migrating chemical pollution, if required.