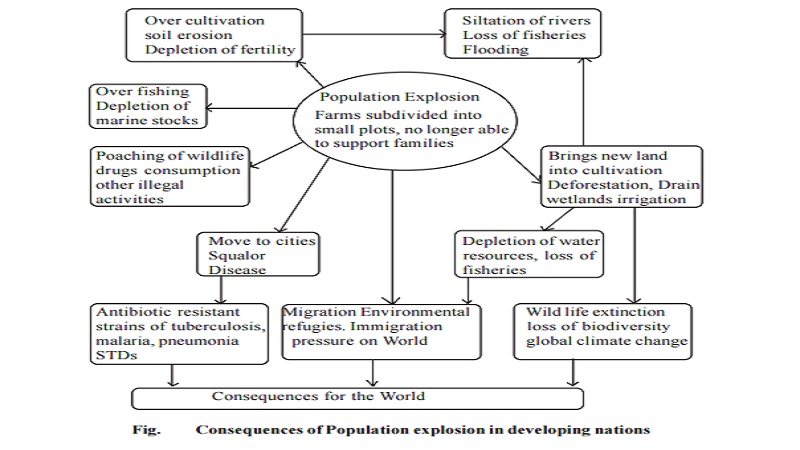 Environment literally means the surroundings of an object. Environmental science or ecology can be defined as the study of organisms in relation to their surrounding. Ecology is one of the most popular areas in biology. Mankind is greatly interested in ecology in view of the problems of over population, environmental pollution, human survival, pest control and conservation of natural resources. The solution to all these problems involve ecological principles. Hence knowledge of environmental science is neces-sary for the survival of human race.

It has been calculated that the human population is growing at a rate of 90 million per year. At this rate the population would reach 12.5 billion by the year 2050. If the population keeps growing at this rate, after a few decades it will perhaps be too large for to be supported by the limited resources available on the earth. The rapid growth will affect living standards, resource use and the environment all over the world.

Thomas Malthus studied the nature of population growth. He claimed that population was increasing faster than food production and feared global starvation. He proposed that, Population grows geometrically (1, 2, 4, 8) rather than arithmetically (1, 2, 3, 4). The field of collecting, compiling and presenting information about population is called demography, and the people engaged in this work are named as demographers.

A Population is a group of interbreeding organisms in a specific region. It is analysed in terms of its variability, density and stability along with environmental and other processes and circumstances that affect these characteristics. Thus the nature of a given population is determined based on birth and death rates, the distribution of ages and sexes, behavioral patterns, food supplies, other environmental features and migration. Fertility and birth rates, mortality and death rates helps us to assess the population growth rates. A dynamic population possess a stable life span and life expectancy.

Declining mortality and not the rising fertility is the primary cause for population growth during the past three hundred years. Population growth and its variation among nations is not uniform. Some regions of the world are over populated while others are literally uninhabited. The distribution of population is influenced by a number of physical and economic factors. The ecumen areasof the world with a congenial climate and fertile soils are highly favourable for human occupancy. Areas of harsh climate - too hot, too cold, too humid or too dry, rugged relief and low in resources are the non-ecumen areas. These are the areas where the natural environment is not conducive for human occupancy.

Fertility is the actual production of offspring.

Birthrate is the number of births in a year per thousand persons.

The total fertility rate is the number of children born to an average woman in a population during her entire reproductive life.

The Zero Population Growth Rate (ZPG) is the number of births by which people are just replacing themselves.

Mortality or death rates is the number of deaths per thousand persons in any given year.

Death rate subtracted from birthrate gives the natural increase of a population.

The total growth rate includes immigration and emigration, as well as births and deaths.

Life span is the oldest age to which a species is known to survive.

Life expectancy is the average age that a newborn infant can expect to attain in any given society.

Reasons for the Explosion

The main reason for slow and fluctuating population growth prior to early 1800's was the prevalence of diseases such as small pox, diphtheria, measles and scarlet fever. In addition, epidemics of diseases such as typhoid fever, cholera and plague eliminated large number of adults. Famines also were not unusual. Biologically speaking, prior to 180s the population was essentially in a dynamic balance with natural enemies and other aspects of environmental resistance. High reproductive rates were largely balanced by high mortality.

Since the 19th centuary

�  discoveries of vaccination provides protections to many of the infectious agents

�  discovery of antibiotics is a major breakthrough in the medical history,

�  improvements in the nutrition and

brought about spectacular reductions in mortality, especially among infants and children. The birth rate has remained high. So the human population entered into exponential growth, as they were freed from natural enemies and other environmental restraints.

Increasing numbers of people put increasing demands on the environment, both through demands for resources and through production of wastes. Most of the human population survived through subsistence agriculture to meet their needs. After the modern medicines and industrial revolution, the death rate plummeted and population growth increased. What are the impacts of rapid growth on a population that is largely engaged in subsistence agriculture? Five basic alternatives are being played out to various degrees,

� people can subdivide farms among the children or intensify cultivation of existing land to increase production per unit area.

�  move to cities and seek employment.

�  engage in illicit activities for income.

�  emigrate to other countries legally.

The rapid population growth especially affects women and children. Increasing the average wealth of a population affects the environment both positively and negatively.