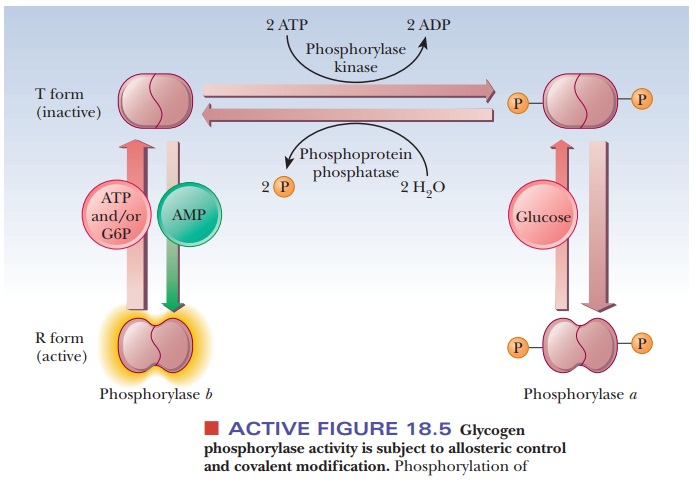 How does an organism ensure that glycogen synthesis and glycogen breakdown do not operate simultaneously?

How does an organism ensure that glycogen synthesis and glycogen breakdown do not operate simultaneously? If this were to occur, the main result would be the hydrolysis of UTP, which would waste chemical energy stored in the phosphoric anhydride bonds. A major controlling factor lies in the behavior of glycogen phosphorylase. This enzyme is subject not only to allosteric control but also to another control feature: covalent modification. In that example, phosphorylation and dephosphorylation of an enzyme determined whether it was active, and a similar effect takes place here. 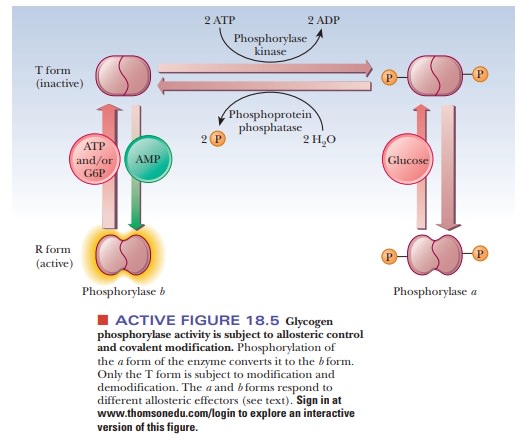 In liver, glucose is an allosteric inhibitor of phosphorylase a. It binds to the substrate site and favors the transition to the T state. It also exposes the phosphorylated serines so that the phosphatase can hydrolyze them. This shifts the equilibrium to phosphorylase b. In muscle, the primary allosteric effectors are ATP, AMP, and glucose-6-phosphate (G6P). When the muscles use ATP to contract, AMP levels rise. This increase in AMP stimulates formation of the R state of phosphorylase b, which is active. When ATP is plentiful or glucose-6-phosphate builds up, these molecules act as allosteric inhibitors shifting the equilibrium back to the T form. These differences ensure that glycogen will be degraded when there is a need for energy, as is the case with high [AMP], low [G6P], and low [ATP]. When the reverse is true (low [AMP], high [G6P], and high [ATP]), the need for energy, and consequently for glycogen breakdown, is less. “Shutting down” glycogen phosphorylase activity is the appropriate response. The combination of covalent modification and allosteric control of the process allows for a degree of fine-tuning that would not be possible with either mechanism alone. Hormonal control also enters into the picture. When epinephrine is released from the adrenal gland in response to stress, it triggers a series of events, that suppress the activity of glycogen synthase and stimulate that of glycogen phosphorylase.

The fact that two target enzymes, glycogen phosphorylase and glycogen syn-thase, are modified in the same way by the same enzymes links the opposing processes of synthesis and breakdown of glycogen even more intimately.

Finally, the modifying enzymes are themselves subject to covalent modifica-tion and allosteric control. This feature complicates the process considerably but adds the possibility of an amplified response to small changes in conditions. A small change in the concentration of an allosteric effector of a modifying enzyme can cause a large change in the concentration of an active, modified target enzyme; this amplification response is due to the fact that the substrate for the modifying enzyme is itself an enzyme.

At this point, the situation has become very complex indeed, but it is a good example of how opposing pro-cesses of breakdown and synthesis can be controlled to the advantage of an organism.