The conversion of pyruvate to glucose occurs by a process called gluconeogenesis. Gluconeogenesis is not the exact reversal of glycolysis. We first met pyruvate as a product of glycolysis, but it can arise from other sources to be the starting point of the anabolism of glucose. Some of the reactions of glycolysis are essentially irreversible; these reactions are bypassed in gluconeogenesis. An analogy is a hiker who goes directly down a steep slope but climbs back up the hill by an alternative, easier route. We shall see that the biosynthesis and the degradation of many important biomolecules follow different pathways. 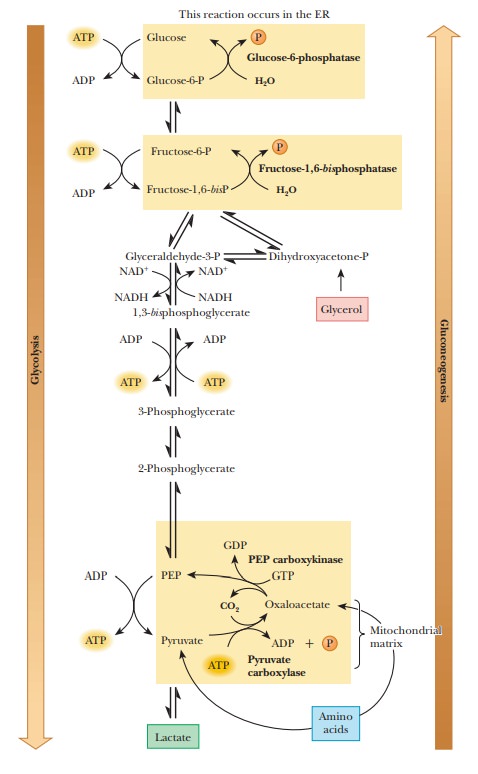 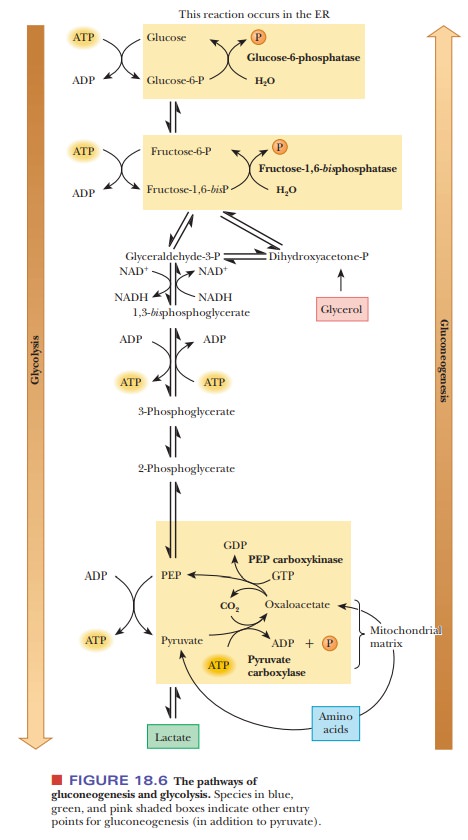 Why is oxaloacetate an intermediate in gluconeogenesis?

The conversion of pyruvate to phosphoenolpyruvate in gluconeogenesis takes place in two steps. The first step is the reaction of pyruvate and carbon dioxide to give oxaloacetate. This step requires energy, which is available from the hydrolysis of ATP.

The enzyme that catalyzes this reaction is pyruvate carboxylase, an allosteric enzyme found in the mitochondria. Acetyl-CoA is an allosteric effector that activates pyruvate carboxylase. If high levels of acetyl-CoA are present (in other words, if there is more acetyl-CoA than is needed to supply the citric acid cycle), pyruvate (a precursor of acetyl-CoA) can be diverted to gluconeogenesis. (Oxaloacetate from the citric acid cycle can frequently be a starting point for gluconeogenesis as well.) Magnesium ion (Mg2+) and biotin are also required for effective catalysis. We have seen Mg2+ as a cofactor before, but we have not seen biotin, which requires some discussion. 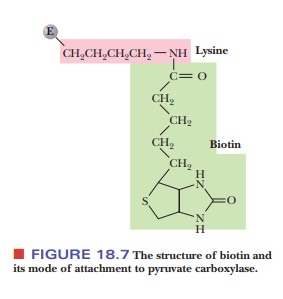 Biotin is a carrier of carbon dioxide; it has a specific site for covalent attach-ment of CO2 (Figure 18.7). The carboxyl group of the biotin forms an amide bond with the ε-amino group of a specific lysine side chain of pyruvate carbox-ylase. The CO2 is attached to the biotin, which, in turn, is covalently bonded to the enzyme, and then the CO2 is shifted to pyruvate to form oxaloacetate (Figure 18.8). Note that ATP is required for this reaction. 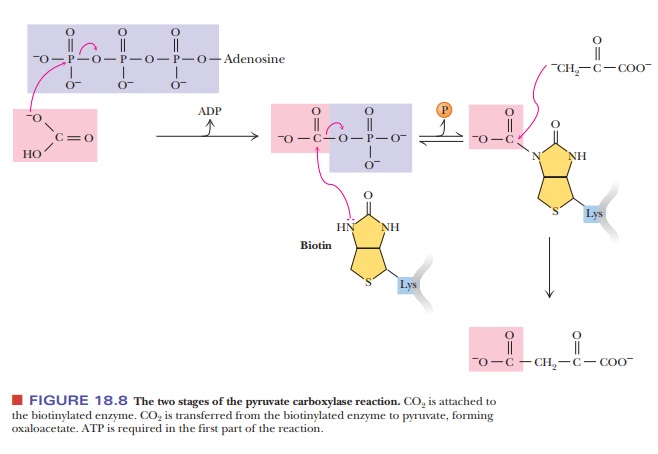 This reaction also involves hydrolysis of a nucleo-side triphosphate—GTP, in this case, rather than ATP.

The successive carboxylation and decarboxylation reactions are both close to equilibrium (they have low values of their standard free energies); as a result, the conversion of pyruvate to phosphoenolpyruvate is also close to equilibrium ( ∆G°' = 2.1 kJ mol–1 = 0.5 kcal mol–1). A small increase in the level of oxaloacetate can drive the equilibrium to the right, and a small increase in the level of phosphoenolpyruvate can drive it to the left. A concept well known in general chemistry, the law of mass action, relates the concentrations of reactants and products in a system at equilibrium. Changing the concentration of reactants or products causes a shift to reestablish equilibrium. A reaction proceeds to the right on addition of reactants and to the left on addition of products.

What is the role of sugar phosphates in gluconeogenesis?

The other two reactions in which gluconeogenesis differs from glycolysis are ones in which a phosphate-ester bond to a sugar-hydroxyl group is hydrolyzed. Both reactions are catalyzed by phosphatases, and both reactions are exergonic. The first reaction is the hydrolysis of fructose-1,6-bisphosphate to produce fructose-6-phosphate and phosphate ion ( ∆G°' = –16.7 kJ mol–1 = –4.0 kcal mol–1).

This reaction is catalyzed by the enzyme fructose-1,6-bisphosphatase, an allosteric enzyme strongly inhibited by adenosine monophosphate (AMP) but stimulated by ATP. Because of allosteric regulation, this reaction is also a control point in the pathway. When the cell has an ample supply of ATP, the formation rather than the breakdown of glucose is favored.

When we discussed glycolysis, we saw that both of the phosphorylation reactions, which are the reverse of these two phosphatase-catalyzed reactions, are endergonic. In glycolysis, the phosphorylation reactions must be coupled to the hydrolysis of ATP to make them exergonic and thus energetically allowed. In gluconeogenesis, the organism can make direct use of the fact that the hydrolysis reactions of the sugar phosphates are exergonic. The corresponding reactions are not the reverse of each other in the two pathways. They differ from each other in whether they require ATP and in the enzymes involved. Hydrolysis of glucose-6-phosphate to glucose occurs in the endoplasmic reticulum. This is an example of an interesting pathway that requires three cellular locations (mitochondria, cytosol, endoplasmic reticulum).

Glucose is formed from pyruvate, which in turn can be obtained from lac-tate that accumulates in muscle during exercise. This process, called glu-coneogenesis, takes place in the liver after lactate is transported there by the blood. The newly formed glucose is transported back to the muscles by the blood.

Gluconeogenesis by passes the irreversible reactions of glycolysis. Oxaloacetate is an intermediate in this pathway.