We have now seen several aspects of carbohydrate metabolism: glycolysis, gluconeogenesis, and the reciprocal breakdown and synthesis of glycogen. Glucose has a central role in all these processes. It is the starting point for glycolysis, in which it is broken down to pyruvate, and for the synthesis of glycogen, in which many glucose residues combine to give the glycogen polymer. Glucose is also the product of gluconeogenesis, which has the net effect of reversing glycolysis; glucose is also obtained from the breakdown of glycogen. Each of the opposing pathways, glycolysis and gluconeogenesis, on the one hand, and the breakdown and synthesis of glycogen, on the other hand, is not the exact reversal of the other, even though the net results are. In other words, a different path is used to arrive at the same place. It is time to see how all these related pathways are controlled.

How does control of key enzymes control carbohydrate metabolism?

An important element in the control process involves fructose-2,6-bisphosphate (F2,6P). We mentioned that this compound is an important allosteric activator of phosphofructokinase (PFK), the key enzyme of glycolysis; it is also an inhibitor of fructose bisphosphate phosphatase (FBPase), which plays a role in gluconeogenesis. A high concentration of F2,6P stimulates glycolysis, whereas a low concentration stimulates gluconeogenesis. The concentration of F2,6P in a cell depends on the balance between its synthesis, catalyzed by phosphofructokinase-2 (PFK-2), and its breakdown, catalyzed by fructose-bisphosphatase-2 (FBPase-2). The enzymes that control the formationand breakdown of F2,6P are themselves controlled by a phosphorylation/ dephosphorylation mechanism similar to what we have already seen in the case of glycogen phosphorylase and glycogen synthase (Figure 18.10). Both enzyme activities are located on the same protein (a dimer of about 100 kDa molecular mass). Phosphorylation of the dimeric protein leads to an increase in activity of FBPase-2 and a decrease in the concentration of F2,6P, ultimately stimulating gluconeogenesis. Dephosphorylation of the dimeric protein leads to an increase in PFK-2 activity and an increase in the concentration of F2,6P, ultimately stimulating glycolysis. The net result is similar to the control of glycogen synthesis and breakdown. 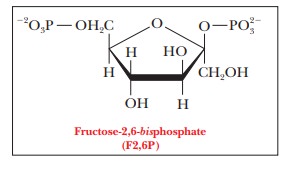 Figure 18.11 shows the effect of fructose-2,6-bisphosphate on the activity of FBPase. The inhibitor works by itself, but its effect is greatly increased by the presence of the allosteric inhibitor AMP. 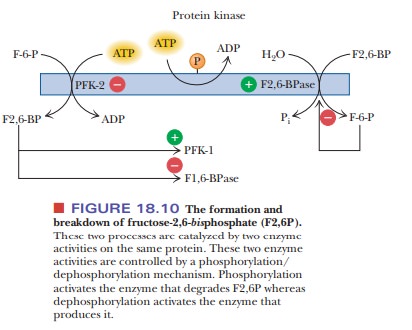 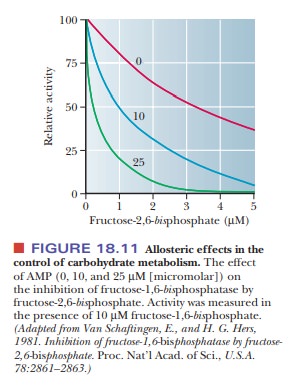 Table 18.1 summarizes important mechanisms of metabolic control. Even though we discuss them here in the context of carbohydrate metabolism, they apply to all aspects of metabolism. Of the four kinds of control mecha-nisms listed in Table 18.1—allosteric control, covalent modification, substrate cycling, and genetic control—we have seen examples of allosteric control and covalent modification and discussed genetic control using the lacoperon as an example. Substrate cycling is a mechanism that we can profit-ably discuss here. 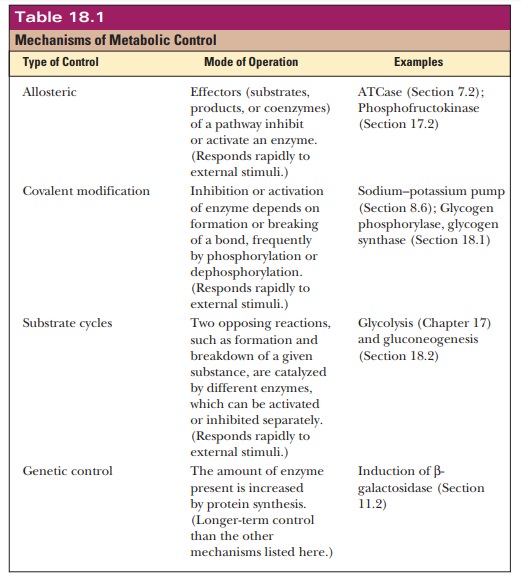 The term substrate cycling refers to the fact that opposing reactions can be catalyzed by different enzymes. Consequently, the opposing reactions can be independently regulated and have different rates. It would not be possible to have different rates with the same enzyme because a catalyst speeds up a reac-tion and the reverse of the reaction to the same extent. We shall use the conversion of fructose-6-phosphate to fructose-1,6-bisphosphate and then back to fructose-6-phosphate as an example of a substrate cycle. In glycoly-sis, the reaction catalyzed by phosphofructokinase is highly exergonic under physiological conditions (∆ G = –25.9 kJ mol–1 = –6.2 kcal mol–1).

The opposing reaction, which is part of gluconeogenesis, is also exergonic ( G–8.6 kJ mol–1 = –2.1 kcal mol–1 under physiological conditions) and is catalyzed by another enzyme, namely fructose-1,6-bisphosphatase.

Hydrolysis of ATP is the energetic price that is paid for independent control of the opposing reactions.

Using combinations of these control mechanisms, an organism can set up a division of labor among tissues and organs to maintain control of glucose metabolism. A particularly clear example is found in the Cori cycle. Shown in Figure 18.12, the Cori cycle is named for Gerty and Carl Cori, who first described it. There is cycling of glucose due to glycolysis in muscle and gluconeogenesis in liver. Glycolysis in fast-twitch skeletal muscle produces lactate under conditions of oxygen debt, such as a sprint. Fast-twitch muscle has comparatively few mitochondria, so metabolism is largely anaerobic in this tissue. The buildup of lactate contributes to the muscular aches that follow strenuous exercise. Gluconeogenesis recycles the lactate that is produced (lactate is first oxidized to pyruvate). The process occurs to a great extent in the liver after the lactate is transported there by the blood. Glucose produced in the liver is transported back to skeletal muscle by the blood, where it becomes an energy store for the next burst of exercise. This is the main reason that athletes receive post-event massages and that they always cool down after the event. Cooling down keeps the blood flowing through the muscles and allows the lactate and other acids to leave the cells and enter the blood. Massages increase this movement from the cells to the blood. Note that we have a division of labor between two different types of organs—muscle and liver. In the same cell (of whatever type), these two metabolic pathways—glycolysis and gluconeogenesis—are not highly active simultaneously. When the cell needs ATP, glycolysis is more active; when there is little need for ATP, gluconeogenesis is more active. Because of the hydrolysis of ATP and GTP in the reactions of gluconeogenesis that differ from those of glycolysis, the overall pathway from two molecules of pyruvate back to one molecule of glucose is exergonic ( ∆G°' = –37.6 kJ mol–1 = –9.0 kcal mol–1, for one mole of glucose). The conversion of pyruvate to lactate is exergonic, which means that the reverse reaction is endergonic. The energy released by the exergonic conversion of pyruvate to glucose by gluconeogenesis facilitates the endergonic conversion of lactate to pyruvate. 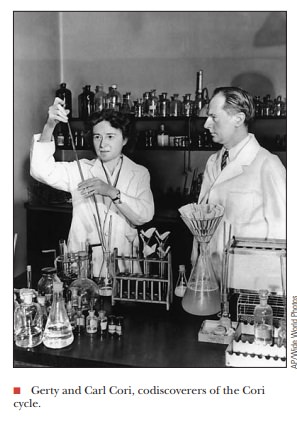 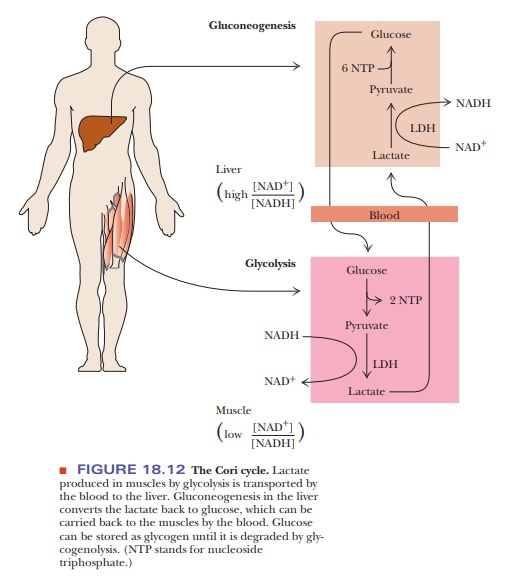 Note that the Cori cycle requires the net hydrolysis of two ATP and two GTP. ATP is produced by the glycolytic part of the cycle, but the portion involving gluconeogenesis requires yet more ATP in addition to GTP.

The hydrolysis of both ATP and GTP is the price of increased simultaneous control of the two opposing pathways.

What roles do the first and last steps of glycolysis play in control of carbohydrate metabolism?

The final step of glycolysis is also a major control point in glucose metabolism. Pyruvate kinase (PK) is allosterically affected by several compounds. ATP and alanine both inhibit it. The ATP makes sense because there would be no reason to sacrifice glucose to make more energy if there is ample ATP. The alanine may be less intuitive. Alanine is the amino version of pyruvate. In other words, it is one reaction away from pyruvate via an enzyme called a transaminase.

Therefore, a high level of alanine indicates that a high level of pyruvate is already present, so the enzyme that would make more pyruvate can be shut down. Fructose-1,6-bisphosphate allosterically activates PK so that the incoming products of the firstreactions of glycolysis can be processed.

Pyruvate kinase is also found as isozymes with three different types of sub-units, M, L, and A. The M subunit predominates in muscle; the L, in liver; and the A, in other tissues. A native pyruvate kinase molecule has four subunits, similar to lactate dehydrogenase and phosphofructokinase. In addition to the allosteric controls mentioned earlier, the liver isozymes also are subject to cova-lent modification, as shown in Figure 18.13. Low levels of blood sugar trigger the release of glucagon, which leads to the production of a protein kinase, as we saw with glycogen phosphorylase. The protein kinase phosphorylates PK, which renders PK less active. In this way, glycolysis is shut down in the liver when blood glucose is low. 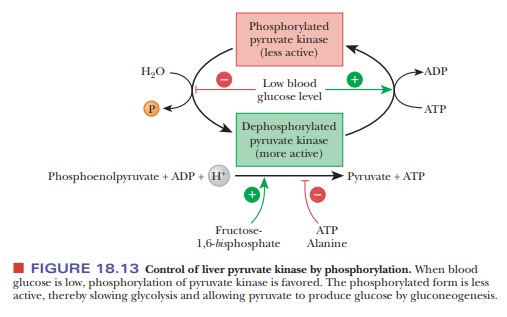 Hexokinase is inhibited by high levels of its product, glucose-6-phosphate. When glycolysis is inhibited through phosphofructokinase, glucose-6-phosphate builds up, shutting down hexokinase. This keeps glucose from being metabo-lized in the liver when it is needed in the blood and other tissues. However, the liver contains a second enzyme, glucokinase, that phosphorylates glucose. Glucokinase has a higher KM for glucose than hexokinase, so it functions only when glucose is abundant. If there is an excess of glucose in the liver, glucokinase phosphorylates it to glu-cose-6-phosphate. The purpose of this phosphorylation is so that it can eventu-ally be polymerized into glycogen.

In the mechanism of substrate cycling, the synthesis and the breakdown of a given compound are catalyzed by two different enzymes. Energy is required, but independent control can be exercised over the two oppos-ing processes.