In the Punjab, the reform movement was spearheaded by the Arya Samaj. It was founded (1875) by a wandering ascetic in the western Gangetic plain, Swami Dayanand Saraswati (1824–83). 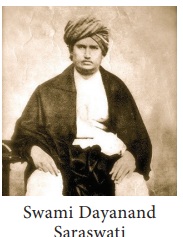 Swami Dayanand later settled in the Punjab to preach his ideas. His book, Satyarthaprakash, enjoyed wide circulation. He declared the practices such as child marriage, the prohibition of widow remarriage, and the alleged polluting effects of foreign travel had no scriptural sanction. The positive principles enunciated by Dayanand were: strict monotheism, condemnation of idolatry, and rejection of Brahman domination of ritual and social practices. He also rejected superstitious beliefs in Hinduism and his cry was “go back to Vedas.”

Arya Samaj attempted to check the incidence of religious conversion in British India. One of its main objectives was counter-conversion, prescribing a purificatory ceremony called suddhi, directed at Hindus who had converted to Islam and Christianity.

The primary achievements of the Arya Samaj were in the field of social reform and spread of education. The Samaj started a number of Dayananda Anglo–Vedic schools and colleges.

Ramakrishna (l836–86), a simple priest of Dakshineswar near Kolkata, emphasised the spiritual union with god through ecstatic practices such as singing bhajans. An ardent worshipper of goddess Kali, the sacred mother, he declared that the manifestations of the divine mother were infinite. In his view, all religions contain the universal elements which, if practised, would lead to salvation. He said, “Jiva is Siva” (all living beings are God). Service for man, must be regarded as God.’ 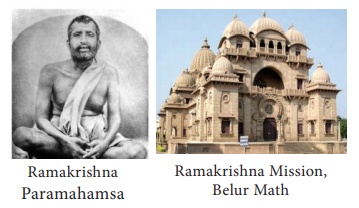 Ramakrishna’s primary achievement was his ability to attract educated youth who were dissatisfied with the rational orientation of religious reform organizations such as the Brahmo Samaj. After his death in 1886, his disciples organised themselves as a religious community and undertook the task of making his life and teaching known in India and abroad. The chief spirit behind this task was Vivekananda. Following the organizational structure of Christian missionaries, Vivekananda established the Ramakrishna Mission which did not restrict itself to religious activities but was actively involved in social causes such as education, health care and relief in times of calamities.

Narendra Nath Datta (l863–1902), later known as Swami Vivekananda, was the prime follower of Ramakrishna Paramahamsa. An educated youth, he was drawn to Ramakrishna’s message. Dissatisfied with conventional Swami philosophical positions Vivekananada and practices, he advocated the practical Vedanta of service to humanity and attacked the tendency to defend every institution simply because it was connected with religion. He emphasized a cultural nationalism and made a call to Indian youth to regenerate Hindu society. His ideas bred a sense of self-confidence among Indians who felt inferior in relation to the materialist achievements of the West. He became famous for his addresses on Hinduism at the 1893 World Congress of Religions in Chicago. Despite his fame, he was condemned by orthodox Hindus for suggesting that the lower castes should be allowed to engage in the Hindu rituals from which they were traditionally excluded. Vivekananda’s activist ideology rekindled the desire for political change among many western-education young Bengalis. Many of the youths who were involved in the militant nationalist struggle during the Swadeshi movement following the Partition of Bengal were inspired by Vivekananda. 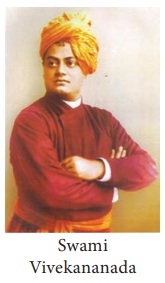 Theosophical Society stimulated a study of the Hindu classics, especially the Upanishads and the Bhagavad Gita. The Theosophical Society also played an important role in the revival of Buddhism in India. Western interest in Hindu scriptures gave educated Hindus great pride in their tradition and culture.

In India the movement became further popular with the election of Annie Besant (1847–1933) as its president after the death of Olcott. She played a role in Indian nationalist politics, and formed the Home Rule League demanding home Annie Besant rule to India on the lines of Ireland. Annie Besant spread Theosophical ideas through her newspapers called New India and Commonweal. 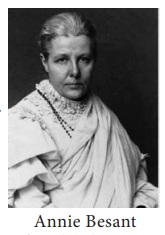