Jyotiba Govindrao Phule was born in 1827 in Maharashtra. He opened the first school for “untouchables” in 1852 in Poona. He launched the Satyashodak Samaj (Truth-Seekers Society) in 1870 to stir the non-Brahman masses to self-respect. Phule opposed child marriage and supported widow remarriage. Jyotiba and his wife Savitribai Phule devoted their lives for the uplift of the depressed classes and women. Jotiba opened orphanages and homes for widows. His work, Gulamgiri (Slavery) is an important text that summarized many of his radical ideas. 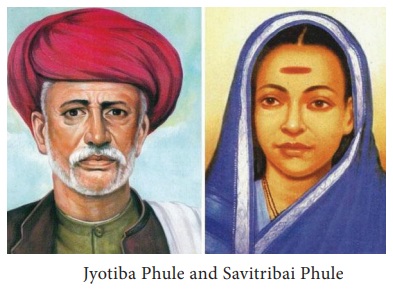 Born to poor parents in Kerala, Narayana Guru (1854–1928) evolved into a poet and scholar in Malayalam, Tamil and Sanskrit. Disturbed by the terrible caste tyranny, that the lower caste people suffered, he dedicated his whole life for the betterment of the oppressed. He set up the Sri Narayana Dharma Paripalana Yogam, an organization to work for the uplift of the “depressed classes”. 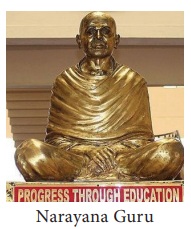 He established a grand temple at Aruvipuram and dedicated it to all. Thinkers and writers such as Kumaran Asan and Dr Palpu were influenced by his ideas and carried forward the movement.

Ayyankali was born in 1863 at Venganoor in Thiruvananthapuram then in the princely state of Travancore. The discrimination he faced as a child turned him into a leader of an anti-caste movement and who later fought for basic rights including access to public spaces and entry to schools. 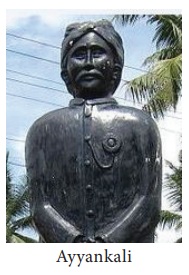 Inspired by Sree Narayana Guru, Ayyankali founded the Sadhu Jana Paripalana Sangam (Association for the Protection of the Poor) in 1907.