Besides insurance, health care is the most heavily document-dominated industry. Every aspect of the care of patients must be documented, from patient acquisition and appointments, to specific treatment and payment.

Besides insurance, health care is the most heavily document-dominated industry. Every aspect of the care of patients must be documented, from patient acquisition and appointments, to specific treatment and payment. Therefore, many groups have emerged to solve the various documentation challenges associated with health care. In this section, we feature a few of those health care–related industry standards.

Much of the recent activity in XML-enabling health care can be attributed to one motiva-tor: The Health Insurance Portability & Accountability Act (HIPAA) of 1996. This one law, also known as the Kennedy-Kassebaum Act, seeks to make major changes to the way medical information is stored and exchanged. It mandates that health care efficiency must be improved by standardizing electronic data interchange, and information must be maintained with the strictest confidentiality and security through the setting and enforce-ment of standards. In particular, HIPAA calls for the standardization of electronic patient health, administrative, and financial data, the establishment of unique health identifiers for individuals, employers, health plans, and health care providers, and the setting of security standards to protect the confidentiality and integrity of “individually identifiable health information,” past, present, or future. And this all needs to be implemented by October 16, 2002 for the first part, and April 14, 2003 for the second. Otherwise, penal-ties up to $250,000 will apply!

XML is perfectly suited to providing all the requirements of HIPAA in a manner that also simplifies the requirements for integration with the tons of legacy systems that medical establishments have in place. Sounds like XML to the rescue. Of course, there are also lots of reasons besides HIPAA why XML should be implemented in the health care space, including platform neutrality, prevalence of tools, greatly reduced cost, a large set of skilled XML labor, and positive buzz—but none of these exerts as much pressure as HIPAA.

A few major standards hope to solve this problem, which is generally known as Electronic Patient Records (EPR). The front leader in this category is the Health Level Seven (HL7) standard. HL7 originally was a non-XML standard but is rapidly becoming a major influence in the XML space with its next standards release. HL7 specifies a health care industry–specific format that covers the needs for EPR, prescriptions, and medical insurance filings as well as medical imaging needs. Its next major release, v3.0, plans to support XML natively and has considerable backing.

For those who are interested in medical record XML standards but can’t wait for the HL7 release, there are a number of other efforts by organizations aiming to “fill the gap” in meeting HIPAA requirements. These include the CISTERN specification, which builds upon HL7’s prior releases. DocScope and Xchart are other private efforts to tackle the EPR problem.

In general, a growing body of work is being pursued in creating XML formats specifi-cally for the health care industry, and especially the medical records industry. For more information, check out the “Healthcare” listing in the “XML in Industry” section of the www.xml.org Web site.

Health Level Seven, whose name refers to the top level (the application level) of the International Standards Organization’s (ISO) communications model for Open Systems Interconnection (OSI), is an American National Standards Institute (ANSI) approved Standards Developing Organization (SDO) focused on the health care arena. SDOs pro-duce standards for a wide variety of domain areas in the health care space, ranging from pharmaceutical, medical devices, imaging, and insurance. The HL7 SDO focuses on standards for clinical and administrative data. More specifically, HL7 produces standards for the exchange, management, and integration of data that supports clinical patient care and the management, delivery, and evaluation of health care services. The goal of the Ann Arbor, Michigan–based nonprofit organization is to service its members, which include providers, vendors, payers, consultants, government groups, and others who have an interest in the development and advancement of clinical and administrative standards for health care. HL7 is also international in scope, with applications in Australia, Canada, China, Finland, Germany, India, Japan, Korea, The Netherlands, New Zealand, Southern Africa, Switzerland, and the United Kingdom.

The application level of the OSI model isn’t concerned with the lower-level aspects of data communication (such as transport and routing) but rather addresses application data definition, exchange, error checking, security checks, participant identification, availabil-ity checks, and data structure.

Created in 1989, HL7 has been standardizing clinical and administrative data for health care, utilizing an EDI-like messaging specification. However, its latest release is a full-scale movement to XML. The most widely adopted of its specifications is patient and financial administration, which solves specific transactional issues such as admitting new patients to a hospital. HL7 solves the major problem of sharing this patient data with all the systems in a hospital that need to know about new patients. This standardization, widely used for patient administration, certain kinds of laboratory data, and to some extent for clinical observations, results in a high level of penetration by HL7 in the industry. Over 90 percent of U.S. hospitals use some portion of the HL7 standard, which is the highest adoption of any specification in health care. However, the scope and focus of the specification still leaves a lot of room for standardization. The specification was started so many years ago and was built up by accretion. The result was so broad based that it became difficult to add new functionality in the 1990s. As a result, the HL7 man-aging organization realized that it needed to go back and rethink the whole approach. It needed a more coherent model, and XML was the answer.

The HL7 created the Reference Implementation Model (RIM), which resulted in a grand simplification of the messages based on XML. The group working on the specification was looking at the fact that despite the best efforts of HL7, and despite intensive work to computerize patient records, the effort to move from paper-based to computer-based sys-tems had stalled. About 85 percent of clinical information was still paper based.

Therefore, even if hospitals used document management systems, the results were printed, and most still used paper, rather than the electronic form. The group realized that the attempt to computerize info relied on a highly regularized, normalized data model that did not fit clinical practice and the way doctors think of the clinical encounter. The various doctors looking at XML saw a means to create a new approach to standardizing clinical information that took advantage of the sparsely populated tree structure of XML. The result was a models-based approach using the RIM, a product of seven years of work in the industry. The final product was HL7 v3.0, a new version by number, but a completely new product in reality.

Because some countries have mandated the use of HL7 by law, there was good reason to maintain the old HL7 interfaces. Therefore, the organization took a scaled approach for gently moving the space from the EDI-like syntax of v2.4 to the XML-based v3.0. This resulted in three major products and versions of the HL7 specification:

An informative specification called “v2.XML” that created an XML expression for the current generation of HL7 specs.

The clinical document architecture (CDA), approved in November 2000, which took the new approach to standardizing clinical information using the ability of XML but didn’t produce a formal version of the HL7 standard.

The formal HL7 v3.0, which is a complete set of clinical messages that overlap the functionality of v2.0 but is derived from the RIM information model.

While contributing to v3.0, the CDA is not formally part of any specification. Instead, it helps users make the mental transition to the new way of doing things. The CDA is based on the RIM and uses HL7 methodology for deriving XML from a UML object model. The core component of information is what a physician is willing to sign. The model combines the concept of a persistent information unit, the concept of wholeness, and a signature to create an integrity-based system. As a result, the final specification is very elementary, almost like XHTML in its model, with a few other features related to the information model of clinical content. Listing 22.5 shows the CDA document hierarchy.

HL7 version 3.0 encapsulates all the functionality of previous versions but uses the new reference model and architecture for its representation. It also allows multiple representa-tions of the expression, not limiting itself to XML. For example, one can express HL7 3.0 in IDL and ASN as well. The current functionality of HL7 is covered in Table 22.2.

Query : Rules applying to queries and to their responses

Henry Levin, the 7th is a 67 year old male referred for further asthma management. Onset of asthma in his teens. He was hospitalized twice last year, and already twice this year. He has not been able to be weaned off steroids for the past several months.

The complete version of this file is shown in a Web browser in Figure 22.6. 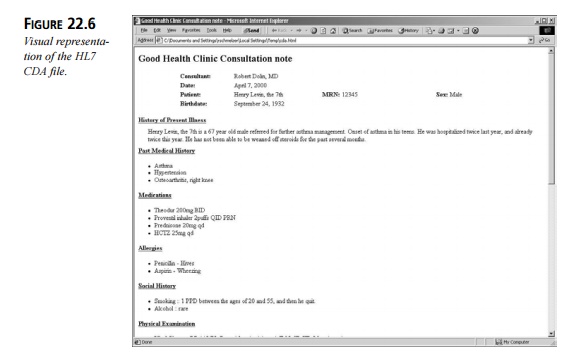 Due to HIPAA’s high visibility in the health care arena, HL7 has become significantly involved with HIPAA implementation as well as legislation. It has produced an adden-dum to the HIPAA specification to specifically enable certain aspects of the HIPAA-mandated electronic transmission of patient records. Future projects will include Home Health, Skilled Nursing Facility, Durable Medical Equipment (DME), End Stage Renal Disease (ESRD), and Preauthorization and Referrals.