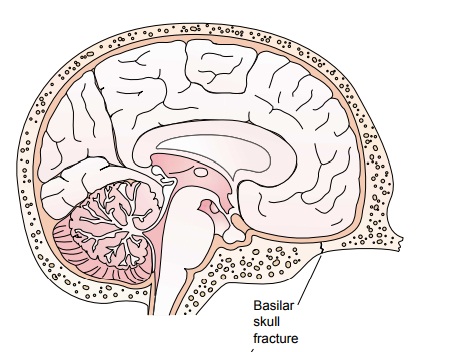 Head injury is a broad classification that includes injury to the scalp,skull, or brain. 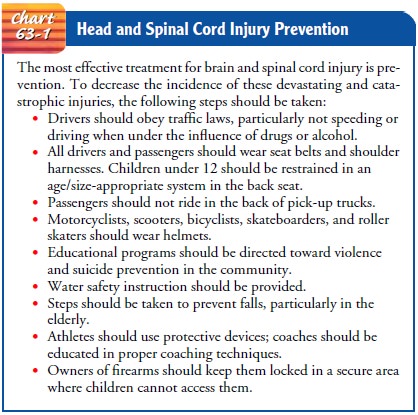 Research suggests that not all brain damage occurs at the moment of impact. Damage to the brain from traumatic injury takes two forms: primary injury and secondary injury. Primary injury is the initial damage to the brain that results from the traumatic event. This may include contusions, lacerations, and torn blood vessels from impact, acceleration/deceleration, or foreign object penetration (Blank-Reid & Reid, 2000; Porth, 2002). Secondary injury evolves over the ensuing hours and days after the initial injury and is due primarily to brain swelling or ongoing bleeding.An injured brain is different from other injured body areas due to its unique characteristics.

It resides within the skull, which is a rigid closed compartment (Bader & Palmer, 2000). Unlike an injured ankle, in which the covering skin expands with swelling, the confines of the skull do not allow for the expansion of cranial contents. Thus, any bleeding or swelling within the skull increases the volume of contents within a container of fixed size and so can cause increased intracranial pressure (ICP). If the increased pressure is high enough, it can cause a downward or lateral displacement of the brain through or against the rigid structures of the skull. This causes restriction of blood flow to the brain, decreasing oxygen delivery and waste removal. Cells within the brain become anoxic and cannot metabolize properly, producing ischemia, infarction, irreversible brain damage, and eventually brain death (Fig. 63-1). 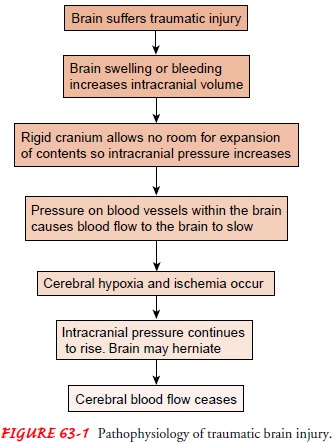 Isolated scalp trauma is generally classified as a minor head injury. Because its many blood vessels constrict poorly, the scalp bleeds profusely when injured.

Trauma may result in an abrasion (brush wound), contusion, laceration, or hematoma beneath the layers of tissue of the scalp (subgaleal hematoma). Large avulsions of the scalp may be potentially life-threatening and are true emergen-cies. Diagnosis of any scalp injury is based on physical examina-tion, inspection, and palpation. Scalp wounds are potential portals of entry of organisms that cause intracranial infections. There-fore, the area is irrigated before the laceration is sutured to remove foreign material and to reduce the risk for infection. Subgaleal hematomas (hematomas below the outer covering of the skull) usually absorb on their own and do not require any specific treatment.

A skull fracture is a break in the continuity of the skull caused by forceful trauma. It may occur with or without damage to the brain. Skull fractures are classified as linear, comminuted, de-pressed, or basilar. A fracture may be open, indicating a scalp laceration or tear in the dura (eg, from a bullet or an ice pick), or closed, in which the dura is intact (Fig. 63-2). 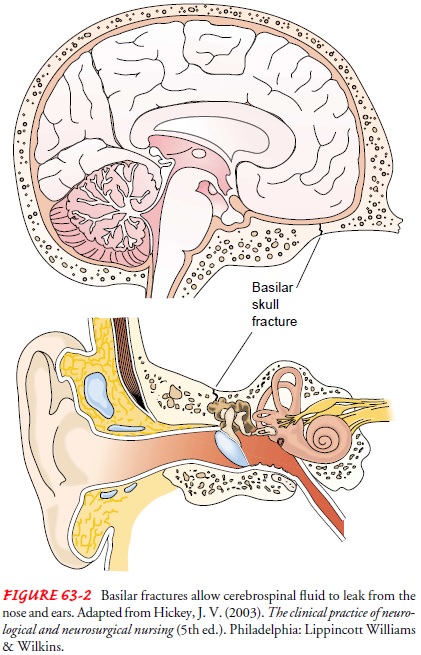 The symptoms, apart from those of the local injury, depend on the severity and the distribution of brain injury. Persistent, local-ized pain usually suggests that a fracture is present. Fractures of the cranial vault may or may not produce swelling in the region of the fracture; therefore, an x-ray is needed for diagnosis.

Fractures of the base of the skull tend to traverse the paranasal sinus of the frontal bone or the middle ear located in the tempo-ral bone (see Fig. 63-2). Thus, they frequently produce hemor-rhage from the nose, pharynx, or ears, and blood may appear under the conjunctiva. An area of ecchymosis (bruising) may be seen over the mastoid (Battle’s sign).

Basal skull fractures are suspected when cerebrospinal fluid escapes from the ears (CSF otorrhea) and the nose (CSF rhinorrhea). A halo sign (a blood stain surrounded by a yellowish stain) may be seen on bed linens or the head dressing and is highly suggestive of a CSF leak. Drainage of CSF is a serious problem because meningeal infec-tion can occur if organisms gain access to the cranial contents through the nose, ear, or sinus through a tear in the dura. Bloody CSF suggests a brain laceration or contusion.

Although a rapid physical examination and evaluation of neuro-logic status detect the more obvious brain injuries, a computed tomography (CT) scan can detect less apparent abnormalities by the degree to which the soft tissue absorbs the x-rays. It is a fast, accurate, and safe diagnostic study that shows the presence, nature, location, and extent of acute lesions. It is also helpful in the on-going management of patients with head injury as it can dis-close cerebral edema, contusion, intracerebral or extracerebral hematoma, subarachnoid and intraventricular hemorrhage, and late changes (infarction, hydrocephalus). Magnetic resonance imaging (MRI) is used to evaluate patients with head injury when a more accurate picture of the anatomic nature of the injury is warranted and when the patient is stable enough to undergo this longer diagnostic study.

Cerebral angiography may also be used; it identifies supra-tentorial, extracerebral, and intracerebral hematomas and cere-bral contusions. Lateral and anteroposterior views of the skull are obtained.

If surgery is necessary, the scalp is shaved and cleansed with copious amounts of saline to remove debris. The fracture is then exposed. After the skull fragments are elevated, the area is débrided. Large defects can be repaired immediately with bone or artificial grafts; if significant cerebral edema is present, repair of the defect can be delayed for 3 to 6 months. Penetrating wounds require surgical débridement to remove foreign bodies and devitalized brain tissue and to control hemorrhage (Blank-Reid & Reid, 2000). Antibiotic treatment is instituted immediately, and blood component therapy is administered if indicated.

As stated previously, fractures of the base of the skull are se-rious because they are usually open (involving the paranasal sinuses or middle or external ear) and result in CSF leakage. The nasopharynx and the external ear should be kept clean. Usually a piece of sterile cotton is placed loosely in the ear, or a sterile cotton pad may be taped loosely under the nose or against the ear to collect the draining fluid. The patient who is conscious is cau-tioned against sneezing or blowing the nose. The head is elevated 30 degrees to reduce ICP and promote spontaneous closure of the leak (Sullivan, 2000), although some neurosurgeons prefer that the bed be kept flat. Persistent CSF rhinorrhea or otorrhea usually requires surgical intervention.