Home | | Anatomy of Flowering Plants: An Introduction to Structure and Development | Haustoria of Parasitic Angiosperms
Posted On :  11.06.2017 10:44 am

Some angiosperms are parasitic on the roots, stems and leaves of other angiosperms.

Some angiosperms are parasitic on the roots, stems and leaves of other angiosperms. These include mistletoe (Viscum album), dodder (Cuscuta spp.), sandalwood (species of Santalaceae), broomrape and figwort (species of Orobanchaceae). Parasitic plants produce highly modified structures, termed haustoria, that penetrate the host tissue to transfer nutrients from the host to the parasite66. A primary haustorium is a direct outgrowth of the apex of the radicle of the parasite. A secondary haustorium is a lateral organ that develops from a modified adventitious root or from out-growths of roots or stems. 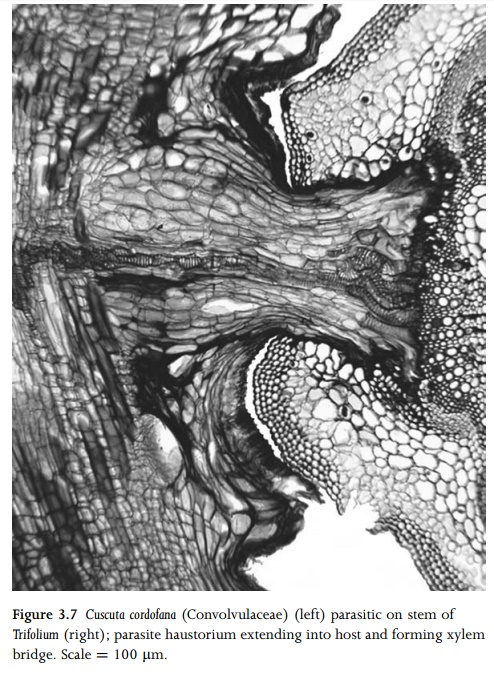 In some parasitic species the haustorium penetrates the host tissue to the xylem and forms a continuous xylem bridge (Fig. 3.7). The epidermal cells in contact with the host become elongated and secretory, and the centre of the haustorium develops an intrusive process that grows into the host by enzymatic and mechanical action. In many parasites (e.g. sandal-woods), the developing haustorium forms a mantle of parench-ymatous tissue around the host organ. In some Loranthaceae the haustorium does not invade the host tissues after forming a mantle, but instead induces the host tissue to form a placenta-like outgrowth of vascular tissue to supply nutrients to the parasite. When the parasite dies, a woody outgrowth of convoluted host tissue remains as a vestige known as a ‘‘woodrose’’.