Angiosperm leaves display much morphological and anatomical diversity. Mature leaves of monocots are typically narrow and consist of a linear lamina with parallel venation and a leaf base that ensheathes the stem.

Angiosperm leaves display much morphological and anatomical diversity. Mature leaves of monocots are typically narrow and consist of a linear lamina with parallel venation and a leaf base that ensheathes the stem. This contrasts with the typical leaf of eudicots and magnoliids, which has a well-defined petiole and elliptical blade (lamina) with reticulate venation. However, exceptions and transitional forms are common; for example, leaves of some monocots (e.g. Dioscorea and Smilax) are petiolate and net-veined, and leaves of some eudicots (e.g. some Apiaceae) are linear. Some species possess compound leaves in which individual leaflets are borne either on a central stem-like axis (pinnate leaves; e.g. tomato, Solanum lycopersicum) or radiate from a single point at the distal end of the petiole (palmate leaves; e.g. Arisaema).

Some species that grow in dry (xeric) or seasonally dry habitats, or otherwise nutrient-deficient habitats, possess specialized xero-morphic features, including sunken stomata to minimize water loss and well-developed sclerenchyma to provide mechanical support and minimize tissue collapse. Other xeromorphic features include the presence of a hypodermis or thick epidermis and thick cuticle which diminish the intensity of light that reaches photosynthetic tissue. Well-developed palisade tissue is also some-times correlated with high light intensity. Some xeromorphic species possess thick, sometimes even succulent, leaves; others have terete (centric or cylindrical) leaves, or hairy leaves, or even folded (plicate) or rolled leaves (Fig. 4.1). Leaf rolling or folding allows minimal water loss in unexpanded developing leaves that are still rolled or folded within the bud or superadjacent leaf, but still achieves a large surface area at maturity. Succulent plants possess large thin-walled cells for water storage. Thick and terete leaves possess a reduced surface/volume ratio that helps to reduce water loss. Other features, such as poorly-developed sclerenchyma and large air spaces in the ground tissue (aerenchyma) are often associated with water plants (hydrophytes). 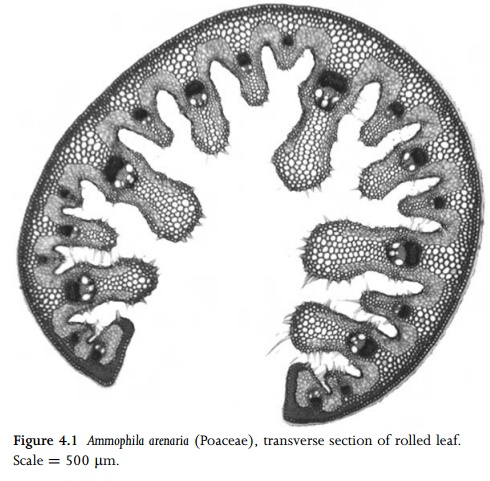 The mature lamina consists of an adaxial and abaxial epidermis enclosing several layers of mesophyll cells that are interspersed with a network of vascular bundles (Fig. 4.2). Each tissue may be variously differentiated into specialized cell types, though the degree of differentiation varies considerably among taxa. Leaves are most commonly bifacial (dorsiventral), in which case the upper and lower surfaces differ morphologically; for example, in relative numbers of stomata and trichomes. However, some species possess isobilateral or unifacial leaves, in which the epidermis and mesophyll are similar on both surfaces. In unifacial-leafed monocots the leaf base is bifacial and the lamina is unifacial and either flattened (e.g. in Acorus and most Iridaceae) or rounded (terete) (e.g. in some Allium species). 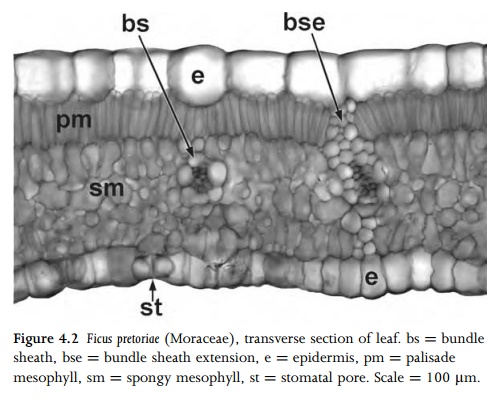 Stipules are (often leaf-like) foliar appendages that occur at leaf base in some angiosperms, especially eudicots. Ligules are out-growths of the abaxial epidermis that occur in the region between the leaf sheath and lamina in grasses and several other mono-cot groups; they are derived from a cross zone in the leaf primordium. Squamules are small hair-like structures associated with the axils of foliage leaves and sometimes floral pedicels, especially in Alismatales (e.g. Potamogeton) and Brassicaceae (e.g. Arabis); in some species they secrete mucilage.