There are two main leaf venation types among the angiosperms: parallel and reticulate. Broadly, parallel venation is typical of mono-cots and reticulate venation of eudicots and magnoliids, though there are many exceptions.

There are two main leaf venation types among the angiosperms: parallel and reticulate. Broadly, parallel venation is typical of mono-cots and reticulate venation of eudicots and magnoliids, though there are many exceptions. In leaves with parallel venation the main veins (primary veins) are parallel for most of their length and converge or fuse at the leaf tip. Typically, numerous small veins interconnect the larger veins, but there are very few vein endings 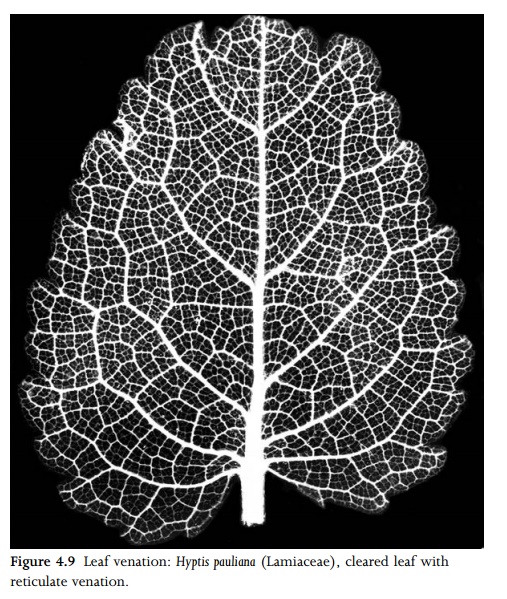 in the mesophyll. In leaves with reticulate venation (Fig. 4.9) there is often a major vein in the middle of the leaf, the midrib or primary vein, which is continuous with the major venation of the petiole. The midrib is linked to many smaller secondary (second-order) veins that branch from it and often extend to the leaf margins. Secondary veins sometimes terminate in a hydathode at the leaf margin. In their turn, smaller veins branch from the second- and subsequent-order venation, forming a reticulate network. The areas of mesophyll between the smallest veins in the leaf are termed areoles. In many species small veins branch into the areoles to form vein endings. Variable aspects of leaf venation include the relative number of veinlet endings per areole, and whether second-order veins terminate at the margins or loop around to link with the superadjacent secondary veins. 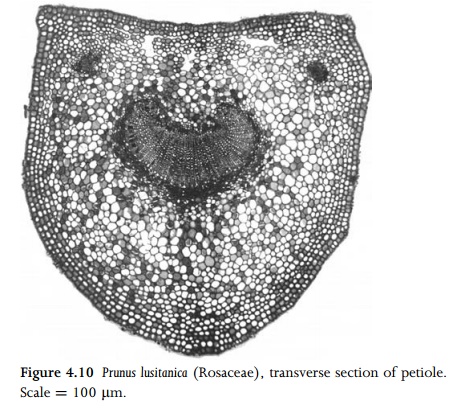 Petioles also possess characteristic venation. The simplest form of petiole vasculature appears in transverse section as a crescent with xylem on the adaxial side and phloem on the abaxial side (Fig. 4.10). Some species possess additional bundles outside the main vascular crescent, which may itself be inrolled at the ends, or in a ring, or divided into separate bundles. Classification of the various forms of petiole vasculature depends on how it is linked to the stem vasculature at the node. One or more vascular traces may depart from each gap in the stem vascular cylinder. The number and pattern of vascular bundles sometimes vary along the length of the petiole. Midrib vasculature, which is continuous with that of the petiole, is subject to similar variation.

Leaf vasculature develops acropetally from the primordial pro-cambial strand at its base. The central trace develops first, and ultimately becomes the midvein. The xylem conducting system of the leaf blade often consists entirely of tracheids, usually with helical or annular thickenings, though in some leaves both vessel elements and xylem parenchyma are also present. The smallest vascular bundles often consist of only one or two rows of xylem tracheids and a few files of phloem sieve tube elements.