Apart from various types of glandular trichomes, some plants possess specialized nectar-secreting regions (extrafloral nectaries) on the leaf or petiole.

Apart from various types of glandular trichomes, some plants possess specialized nectar-secreting regions (extrafloral nectaries) on the leaf or petiole (Fig. 4.7). Although in some cases the function of the extrafloral nectaries remains in doubt, and may be related to regulation of surplus sugars, most are believed to have a role in insect plant relations. For example, some extra-floral nectaries attract ants (e.g. in Acacia), which protect the plant against potential insect herbivores. Extrafloral nectaries are often found over veins, or in the angles of principal veins, or at the proximal or distal ends of the petiole. As with floral nectaries, they consist of groups of glandular trichomes (e.g. in some Hibiscus species) or regions of anticlinally elongated secretory epidermal cells, often associated with underlying vascular tissue. Extrafloral nectaries are sometimes situated in specialized pockets (domatia), or alternatively occur in pits or raised regions (e.g. in many Euphorbiaceae). Pearl glands, or pearl bodies, occur on leaves of some tropical eudicots (e.g. Fabaceae) and magnoliids (e.g. Piperaceae); these are globular trichomes that are specialized to attract ants, which then protect the plant from herbivory. They secrete substances rich in carbohydrates, lipids and proteins. 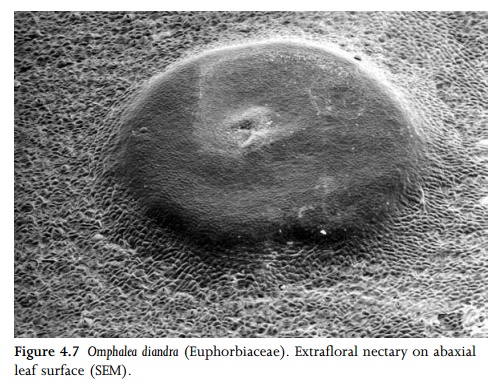