Home | | Anatomy of Flowering Plants: An Introduction to Structure and Development | Root Epidermis and Hypodermis
Posted On :  11.06.2017 10:34 am

In eudicots the root epidermis (rhizodermis) is typically uniseriate, as in other parts of the plant. In monocots the root epidermis is normally persistent and remains as the outermost layer of the root. A velamen is particularly characteristic of aerial roots of Orchidaceae and Araceae. Velamen cells of a mature root are dead, and often become saturated with water for storage purposes, whereas a persistent rhizodermis consists of living cells. A velamen is usually multilayered but can also be one-layered; the cell walls are often partly thickened and sometimes lignified. In Orchidaceae, velamen cells frequently possess wall striations.

Most angiosperms possess absorptive root hairs in under-ground roots, usually confined to a region about a centimetre from the root apex, beyond the meristematic region, but in an area where cells are still enlarging. In general, root hairs persist for only a limited period before withering. This region of the root is the most active in absorption of water, and the root hairs serve to present a greater surface area for this purpose. Root hairs are formed from epidermal cells by apical intrusive growth. In some plants only specialized root epidermal cells (trichoblasts) are capable of root hair production. Trichoblasts are formed inmeristematic epidermal cells that overlie the junction between two cortical cells. Thus, in many species the root epidermis is dimorphic and clearly differentiated into short cells (trichoblasts) and long cells (sometimes termed atrichoblasts), as in Arabidopsis thaliana. Some other species (including many monocots such as species of Asparagales and Araceae) instead possess a dimorphic hypodermal layer immediately below the root epidermis63; this is normally interpreted as the outermost cortical (exodermal) layer but may represent the innermost layer of a multilayered persistent rhizodermis. The hypodermal short cells resemble trichoblasts, and are probably transfusion cells. 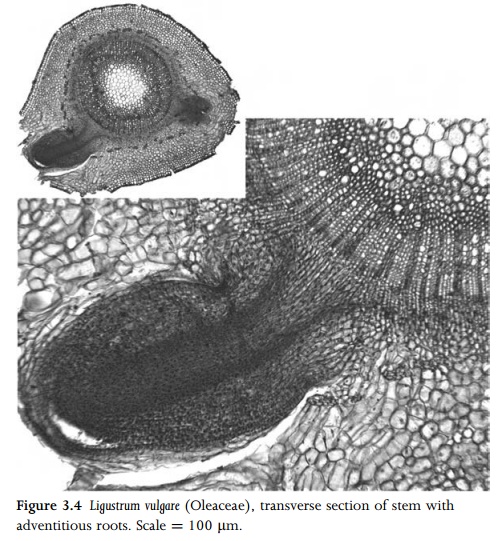