Home | | Anatomy of Flowering Plants: An Introduction to Structure and Development | Pericycle and Vascular Cylinder
Posted On :  11.06.2017 10:37 am

The vascular tissue in the centre of the root is surrounded by a single layer (or rarely, more layers) of thin-walled cells, termed the pericycle.

The vascular tissue in the centre of the root is surrounded by a single layer (or rarely, more layers) of thin-walled cells, termed the pericycle (Fig. 3.3). Both the pericycle and vascular tissue are derived from cells on the proximal (shoot) side of the quiescent centre. The pericycle is potentially meristematic in younger roots, as it is the site of lateral root initiation, but in older roots it can become lignified. 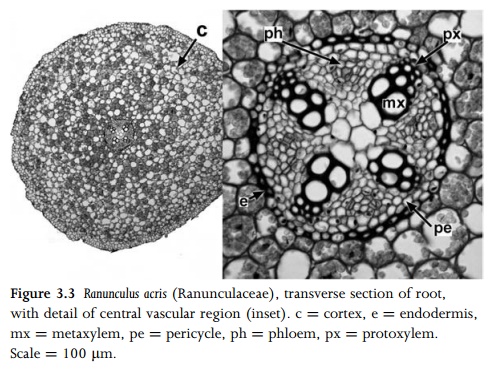 The primary vascular tissue consists of several strands of phloem alternating with the rays of a central area of xylem that appears star-shaped in transverse section. In a mature root, the protoxylem elements, which were the first-formed and are the narrowest in diameter, are located at the tips of the rays, nearest to the pericycle. The metaxylem elements are larger and located closer to the centre of the root. Both xylem and phloem are exarch in the root (i.e. they mature centripetally). Similarly, the protophloem is located close to the pericycle, in contrast with the metaphloem, which is situated closer to the centre of the root.

Roots possess two, three, four or more protoxylem poles (rays), in which case they are said to be diarch, triarch, tetrarch or polyarch respectively. There is often variation in the number of xylem poles, sometimes even within the same plant, depending on the diameter of the root. Most commonly, roots possess relatively few xylem poles (usually two, three or four) and the central region is occupied by a group or ring of xylem vessels. However, some monocots (e.g. Iris) possess polyarch roots, and the centre of the root is parenchymatous, sometimes becoming lignified in older roots.