The root cap is composed of several layers of parenchymatous cells.

The root cap is composed of several layers of parenchymatous cells. The cells of the root cap are initially derived from the apical meristem. However, ontogenetic studies in maize (Zea mays), a species with ‘‘closed’’ root apical structure (Fig. 3.1), have shown that the cap initials become established and independent from the apical meristem at an early stage in seedling develop-ment. The cap meristematic cells, located adjacent (distal) to the quiescent centre, produce derivatives that are eventually displaced towards the outside of the root cap, and subsequently sloughed off, contributing to the external slime that allows the root to push through the soil. Cells are generated and lost in the root cap at approximately the same rate. 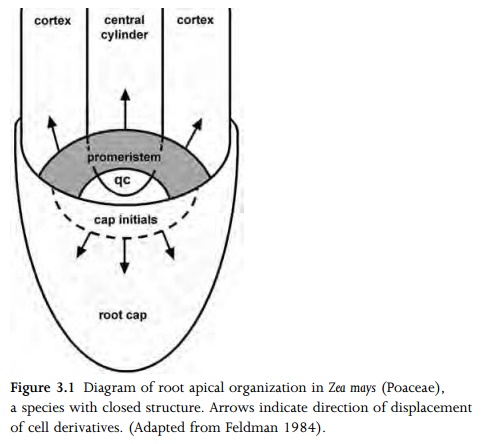