The following are the methods of connecting a computer to the Internet using software and hardware peripherals.

The following are the methods of connecting a computer to the Internet using software and hardware peripherals.

• To connect the Internet, any one of the following is mandatory.

• NIC- Network Interface Card(wired/ wireless) facility is the most important hardware required to connect Internet. For example, the Laptop can be connected Internet through the wired/wireless.

• Dongle is used to connect the Internet using cellular network

The following methods are able to connect internet. 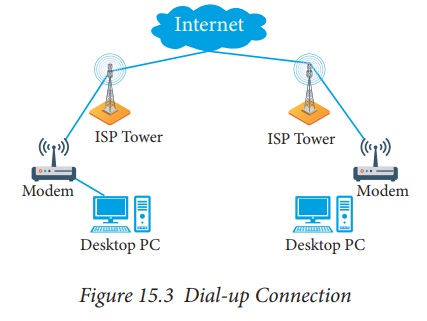 ISDN is the acronym of Integrated Services Digital Network. It establishes the connection using the phone lines (PSTN) which carry digital signals instead of analog signals. It is a set of communication standards for simultaneous digital transmission of data, voice, video, and other services over the traditional circuits of the public switched telephone network. There are two techniques to deliver ISDN services such as Basic Rate Interface (BRI) and Primary Rate Interface (PRI). 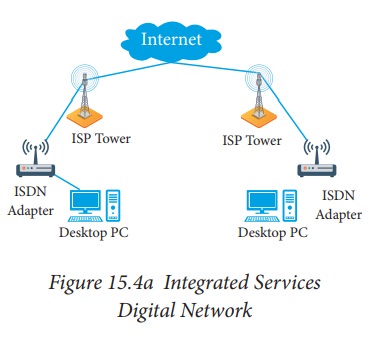 Digital Subscriber Line (DSL) is a high-speed Internet service for homes and businesses that competes with cable and other forms of broadband Internet. DSL provides high-speed networking over ordinary Telephone lines using broadband modem technology. The technology behind DSL enables Internet and telephone service to work over the same phone line without requiring customers to disconnect either their Voice or Internet connections.

The cable TV network can be used for connecting a computer or a local network to the Internet, competing directly with DSL (Digital Subscriber Line) technology.

This type of network is classified as HFC (Hybrid Fiber-Coaxial), as it uses both fiber optics and coaxial cables. The connection between the cable TV company to the distribution points (Optical nodes) is made using fiber optics, with distances up to 25 miles (40 km). Each optical node is typically serves between 500 and 2,000 clients (customers).

The following diagram shows that how internet is accessed using Cable TV connection: 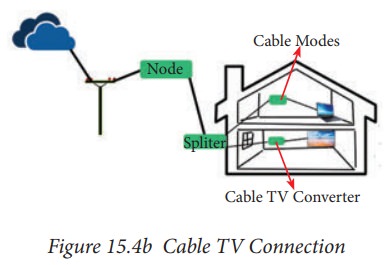 It is a technology for wireless local area networking with devices based on the IEEE 802.11 standards. Devices that can use Wi-Fi technology include personal computers, video-game consoles, phones and tablets, digital cameras, smart TVs, digital audio players and modern printers. Wi-Fi compatible devices can connect to the Internet via a WLAN and a wireless access point. Such an access point (or hotspot) has a range of about 20 meters (66 feet) indoors and a greater range of outdoors. Hotspot coverage can be as small as a single room with walls that block radio waves, or as large as many square kilometres achieved by using multiple overlapping access points.