As indicated earlier, in traditional coastal fish farming mullets are raised along with other species such as milkfish, shrimps, pearlspotsea-bass, tenpounders (Elops), etc.

As indicated earlier, in traditional coastal fish farming mullets are raised along with other species such as milkfish, shrimps, pearlspotsea-bass, tenpounders (Elops), etc. When the system of tidal stocking is adopted, the stocking rate depends on several extraneous factors and therefore the quantity and composition of the seed stock can seldom be determined. This practice often leads to understocking and the inadvertent presence of slow-growing species. Because of this, fish culturists now often supplement the stocks with fry and fingerlings caught from the wild, as described in the previous section. The proportion of grey mullets in the impoundments is controlled to some extent depending on the market value of the species, but generally in brackish-water areas mullets constitute about 10–40 per cent of the stock. In extensive systems of culture, neither fertilization nor feeding are practised. Regular exchange of water is performed, based on the tidal regime in the area. In estuarine regions, the incoming tidal water often contains large quantities of detritus, besides planktonic organisms. The detritus settles on the bottom of the impoundments and adds to the fertility of the soil. These areas are characterized by rich benthic growths of algal complexes, containing bacterial and microscopic animal populations as well. This is the main food source for the mullets and the milkfish in such waters. In well-managed impoundments, the total production can vary between 150 and 1500kg/ha (fig. 21.5). 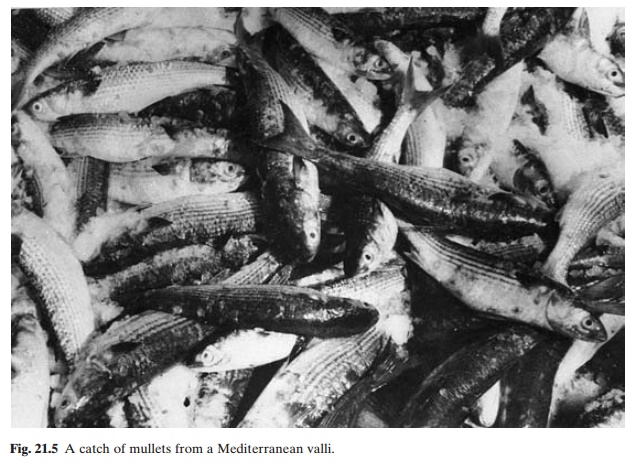 Even in properly designed coastal farms monoculture of mullets is seldom practised, but mullets can form the main species if selective stocking is carried out. In the coastal fish farms on the west coast of India, mullets, milkfish and the pearlspot are cultured together. In the extensive system adopted in these farms, production seldom exceeds 400kg/ha. By adopting improved rates of stocking of M. tade and M. parsia in pilot farms in the Gangetic delta,a production of up to 2200kg/ha has been obtained (Jhingran, 1982). Production in Hawaiian coastal ponds, before their decline in the last century, used to be around 230kg/ha, of which about two-thirds were mullets and the rest milkfish.

Mullets form a constituent of stocks in milk-fish farms of Southeast Asia, although many farmers consider mullets to be incompatible with milkfish in intensive culture. The methods of growing benthic algal pastures in brackish-water ponds, on which both milkfish and mullets feed, is described later. Mullets seldom constitute more than 10 per cent of the stock in such ponds.

The more intensive polyculture of mullets is done in fresh or slightly saline waters in Hong Kong, Taiwan, Israel and, on a smaller scale, in Egypt and India. In both Hong Kong and Taiwan, they are cultured together with Chinese carp. In Hong Kong ponds, when mullets form the main species, stocking may be done at the rate of 10000–15000 mullet fingerlings per ha (about 7.5cm long) along with 1000–2000 Chinese carp fingerlings per ha in early spring. The stock is thinned to about 3500/ha when the fish have grown to about 12cm in length. Feeding is generally with rice bran for the first two months and thereafter with a mixture of rice bran and peanut oil cake. Organic manuring of the ponds is also done to increase the production of natural food. Production varies from 2500–3500kg/ha.

In Taiwan, the stocking rate per ha is reported to be about 3000 mullets, 2000 milk-fish, 3250 Chinese carps and 500 common carp. The ponds are fertilized with superphosphates at the rate of 60kg/ha. The feed comprises rice bran, soybean cake and peanut meal. Mugilcephalus attain a size of about 300g in one yearand about 1.2kg if cultured for the second year. Three-year-old M. cephalus reach a weight of 2kg under pond conditions.

Mullets are reared in polyculture with common carp, silver carp and tilapia. The fry of mullets collected from coastal waters are over-wintered and then grown in nursery ponds to a weight of about 1–2g for stocking polyculture ponds. Fry of this size are generally stocked at the rate of 5000/ha, when the total stocking density is about 12300/ha (3000 common carp,

4000 tilapia and 300 silver carp). The mullet reaches around 100g in weight in about four months and about 200g by the end of the year. As M. cephalus fry are not readily available in sufficient numbers, many farmers use M. capito.

This species grows at a much slower rate and has to be reared for two years to reach a marketable size. Pond fertilization and the type of feeds used in these polyculture ponds are generally the same as in carp ponds.