Groups, rings, and fields are the fundamental elements of a branch of mathematics known as abstract algebra, or modern algebra.

Groups, rings, and fields are the fundamental elements of a branch of mathematics known as abstract algebra, or modern algebra. In abstract algebra, we are concerned with sets on whose elements we can operate algebraically; that is, we can combine two elements of the set, perhaps in several ways, to obtain a third element of the set. These operations are subject to specific rules, which define the nature of the set. By convention, the notation for the two principal classes of operations on set elements is usually the same as the notation for addition and multiplication on ordinary num- bers. However, it is important to note that, in abstract algebra, we are not limited to ordinary arithmetical operations. All this should become clear as we proceed.

A group G, sometimes denoted by {G, # }, is a set of elements with a binary operation

denoted by # that associates to each ordered pair (a, b) of elements in G an element

(a # b) in G, such that the following axioms are obeyed: 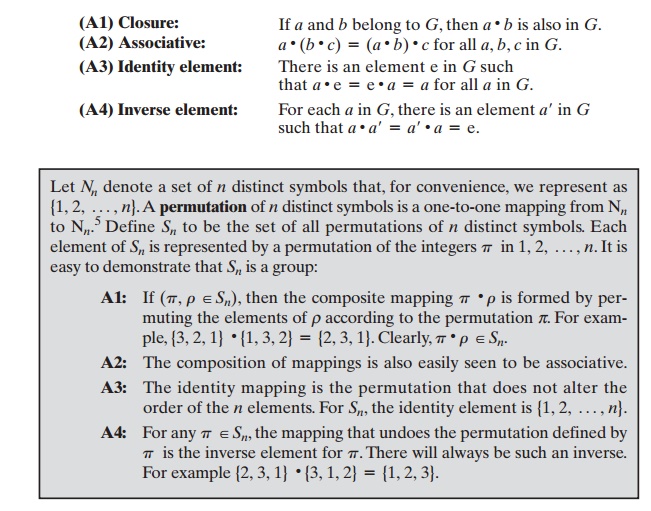 A group is said to be abelian if it satisfies the following additional condition:

CYCLIC GROUP We  define exponentiation within a group as a repeated appli- cation of the group operator,  so that a3 = a a a. Furthermore, we define a0 = e as the identity element, and  a - n  =  (a')n, where  a'  is the inverse element of  a within the group. A group G is cyclic if every element of G is a power ak (k is an integer) of a fixed element a H G. The element a is said to generate the group G    or to be a generator of G. A cyclic group is always abelian and may be finite or infinite.

The additive group of integers is an infinite cyclic group generated by the element 1. In this case, powers are interpreted additively, so that n is the nth power of 1.

A ring R, sometimes denoted by {R,  +,  *}, is a set of elements with two binary operations, called addition and multiplication,6 such that for all a, b, c in R the following  axioms  are  obeyed.

With respect to addition and multiplication, the set of all n-square matrices over the real numbers is a ring.

A ring is said to be commutative if it satisfies the following additional condition:

(M4) Commutativity of multiplication: ab = ba for all a, b in R.

Next, we define an integral domain, which is a commutative ring that obeys the following axioms.

Let S be the set of integers, positive, negative, and 0, under the usual operations of addition and multiplication. S is an integral domain.

A field F, sometimes denoted by {F,  +,  x}, is a set of elements with two binary opera- tions, called addition and multiplication, such that for all a, b, c in F the following axioms are obeyed.

(M7) Multiplicative inverse:  For each a in F, except 0, there is an element

In essence, a field is a set in which we can do addition, subtraction, multiplication, and division without leaving the set. Division is defined with the following rule: a/b = a(b - 1).

Figure 4.2 summarizes the axioms that define groups, rings, and fields.