If a is an integer and n is a positive integer, we define a mod n to be the remainder when a is divided by n. The integer n is called the modulus.

If a is an integer and n is a positive integer, we define a mod n to be the remainder when a is divided by n. The integer n is called the modulus. Thus, for any integer a, we can rewrite Equation (4.1) as  follows:

Congruences have the following properties:

The remaining points are as easily proved.

Note that, by definition (Figure 4.1), the (mod n) operator maps all integers into the set of integers {0, 1, ... , (n - 1)}. This suggests the question: Can we perform arithmetic operations within the confines of this set? It turns out that we can; this technique is known as modular arithmetic.

The remaining properties are proven as easily. Here are examples of the three properties:

Exponentiation is performed by repeated multiplication, as in ordinary arith- metic. (We have more to say about exponentiation in Chapter 8.)

Thus, the rules for ordinary arithmetic involving addition, subtraction, and multiplication carry over into modular arithmetic.

Table 4.2 provides an illustration of modular addition and multiplication modulo 8. Looking at addition, the results are straightforward, and there is a regular pattern to the matrix. Both matrices are symmetric about the main diagonal in conformance to the commutative property of addition and multiplication. As in ordinary addition, there is an additive inverse, or negative, to each integer in modu- lar arithmetic. In this case, the negative of an integer x is the integer y such   that 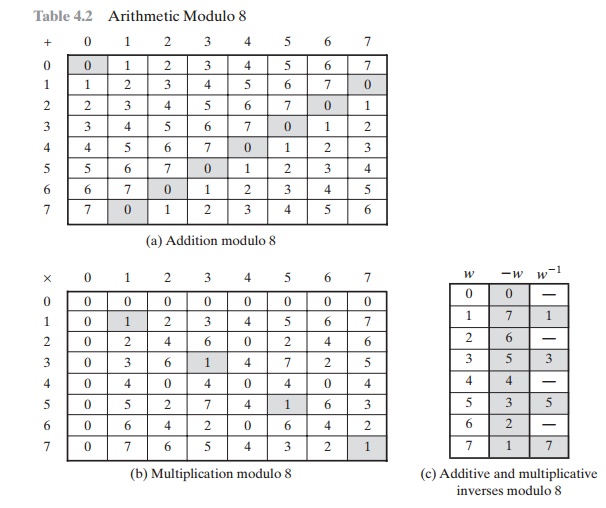 Define the set Zn as the set of nonnegative integers less than n:

The residue classes (mod 4) are

If we perform modular arithmetic within Zn, the properties shown in Table 4.3 hold for integers in Zn. We show in the next section that this implies that Zn is a com- mutative ring with a multiplicative identity element.

However, the following statement is true only with the attached condition:

Recall that two integers are relatively prime if their only common positive integer factor is 1. Similar to the case of Equation (4.4), we can say that Equation (4.5) is

Table 4.3 Properties of Modular Arithmetic for Integers in Zn

To see this, consider an example in which the condition of Equation (4.5) does not hold. The integers 6 and 8 are not relatively prime, since they have the common factor 2. We have the following:

The reason for this strange result is that for any general modulus n, a multiplier a that is applied in turn to the integers 0 through (n - 1) will fail to produce a complete set of residues if a and n have any factors in common.

The line of residues contains all the integers in Z8, in a different order.

The Euclidean algorithm can be based on the following theorem: For any nonnegative integer a and any positive integer b,

Equation (4.6) can be used repetitively to determine the greatest common divisor.

This is the same scheme shown in Equation (4.3), which can be rewritten in the following way. 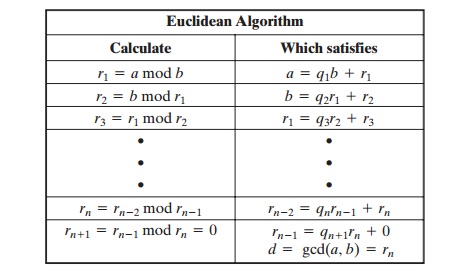 We can define the Euclidean algorithm concisely as the following recursive function.

else return Euclid(b, a mod b);

We now proceed to look at an extension to the Euclidean algorithm that will be impor- tant for later computations in the area of finite fields and in encryption algorithms, such as RSA. For given integers a and b, the extended Euclidean algorithm not only calculate the greatest common divisor d but also two additional integers x and y that satisfy the following equation.

Now let us show how to extend the Euclidean algorithm to determine (x, y, d) given a and b. We again go through the sequence of divisions indicated in Equation (4.3), and we assume that at each step  i  we can find integers  xi  and  yi  that satisfy   ri  = axi  + byi. We end up with the following sequence. 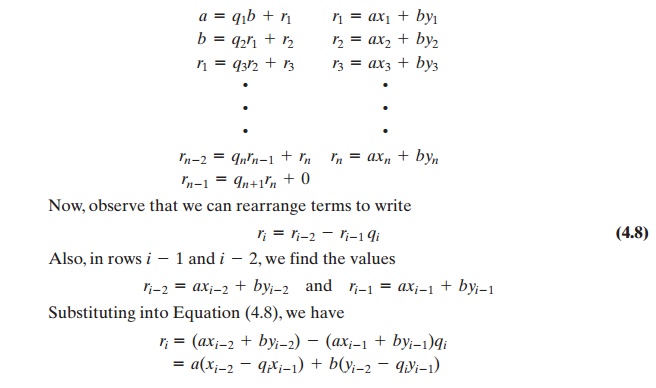 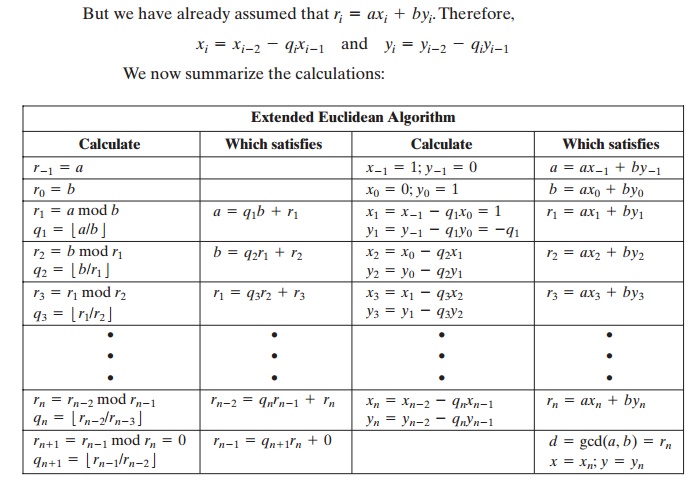 We need to make several additional comments here. In each row, we calculate a new remainder ri based on the remainders of the previous two rows, namely ri - 1 and ri - 2. To start the algorithm, we need values for r0 and r- 1, which are just a and b. It is then straightforward to determine the required values for x - 1, y- 1, x0, and y0.