Finite Fields Of The Form GF(p)

FINITE FIELDS OF THE FORM GF(p)

In Section 4.4, we defined a field as a set that obeys all of the axioms of Figure 4.2 and gave some examples of infinite fields. Infinite fields are not of particular interest in the context of cryptography. However, finite fields play a crucial role in many cryptographic algorithms. It can be shown that the order of a finite field (number of elements in the field) must be a power of a prime pn, where n is a positive integer.

The finite field of order pn is generally written GF(pn); GF stands for Galois field, in honor of the mathematician who first studied finite fields. Two special cases are of interest for our purposes. For n = 1, we have the finite field GF(p); this finite field has a different structure than that for finite fields with n 7 1 and is studied in this section. In Section 4.7, we look at finite fields of the form GF(2n).

Recall that we showed in Section 4.3 that the set Zn of integers {0, 1, ..... , n - 1}, together with the arithmetic operations modulo n, is a commuta-tive ring (Table 4.3). We further observed that any integer in Zn has a multiplicative inverse if and only if that integer is relatively prime to n [see discussion of Equation (4.5)]7 If n is prime, then all of the nonzero integers in Zn are relatively prime to n, and therefore there exists a multiplicative inverse for all of the nonzero integers in Zn. Thus, for Zp we can add the following properties to those listed in Table 4.3:

Because w is relatively prime to p, if we multiply all the elements of Zp by w, the resulting residues are all of the elements of Zp permuted. Thus, exactly one of the residues has the value 1. Therefore, there is some integer in Zp that, when multiplied by w, yields the residue 1. That integer is the multiplicative inverse of w, designated w - 1.Therefore, Zp is in fact a finite field. Furthermore, Equation (4.5) is consistent with the existence of a multiplicative inverse and can be rewritten without the condition: 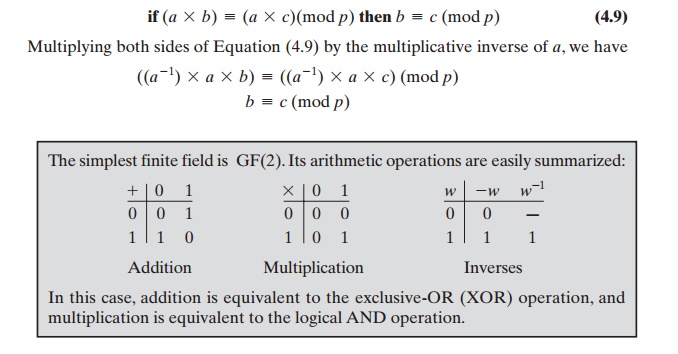 Table 4.5 shows arithmetic operations in GF(7). This is a field of order 7 using modular arithmetic modulo 7. As can be seen, it satisfies all of the properties required of a field (Figure 4.2). Compare this table with Table 4.2. In the latter case, we see that the set Z8, using modular arithmetic modulo 8, is not a field. Later in this chapter, we show how to define addition and multiplication operations on Z8 in such a way as to form a finite field.

Finding the Multiplicative Inverse in GF(p)

p.               You simply construct a multiplication table, such as shown in Table 4.5b, and the desired result can be read directly. However, for large values of p, this approach is not practical. 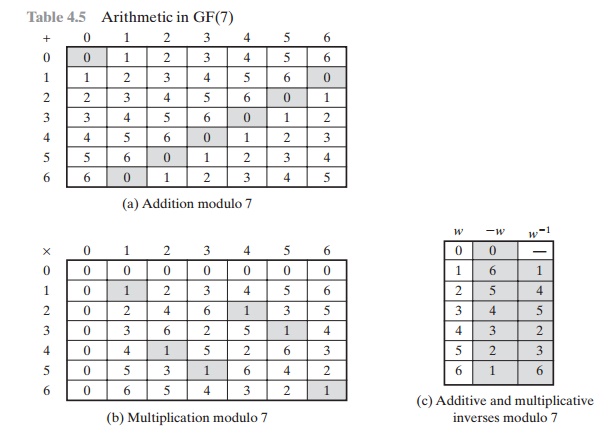 We repeat here Equation (4.7), which we showed can be solved with the extended Euclidean algorithm:

In this section, we have shown how to construct a finite field of order p, where p is prime. Specifically, we defined GF(p) with the following properties.