As a young man, Mendel spent his time doing genetics research and teaching math, physics, and Greek to high school children in Brno (now in the Czech Republic).

As a young man, Mendel spent his time doing genetics research and teaching math, physics, and Greek to high school children in Brno (now in the Czech Republic). Mendel studied the inheritance of vari-ous traits of the common garden pea, Pisum sativum, because he was able to raise two generations a year. He studied many differ-ent physical traits of the pea, such as flower color, flower position, seed color and shape, and pod color and shape. Mendel grew differ-ent plants next to each other, looking for traits that mixed together. Luckily, the traits he studied were each due to a single gene that was either dominant or recessive, although he did not know this at the time. Consequently, he never saw them “mix.” For example, when he grew yellow peas next to green peas, the offspring looked exactly like their parents. This showed that traits do not blend in the offspring, which was a common theory at the time.

Next Mendel moved pollen from one plant to another with different traits. He counted the number of offspring that inherited each trait and found that they were inherited in specific ratios. For example, when he cross-pollinated the yellow and green pea plants, their offspring, the F1 generation, was all yellow. Thus the yellow trait must dominate or mask the green trait. He then let the F 1 plants produce offspring, and grew all of the seeds. These, the F 2 generation, segregated into 3/4 yellow and 1/4 green. When green seeds reappeared after skipping a generation, Mendel concluded that a “factor” for the trait—what we call a gene nowadays—must have been present in the parent, even though the trait was not actually displayed.

Mendel demonstrated many principles that form the basis of modern genetics. First, units or factors (now called genes) for each trait are passed on to successive generations. Each parent has two copies of each gene but contributes only one copy of the gene to each offspring. This is called the principle of segregation. Second, the principle of independent assortment states that different off- spring from the same parents can get separate sets of genes. The same phenotype (the observable physical traits) can be represented by different genotypes (combinations of genes). In other words, although a gene is present, the corresponding trait may not be seen in each generation. When Mendel began these experiments, he used purebred pea plants—that is, each trait always appeared the same in each generation. So when he first crossed a yellow pea with a green pea, each parent had two identical copies or alleles of each gene. The green pea had two green alleles, and the yellow pea had two yellow alleles. Consequently, each F 1  offspring received one yellow allele and one green allele. Despite this, the F1 plants all had yellow peas. Thus yellow is dominant to green. Finally when the F1 generation was self-pollinated, the F2 plants included some that inherited two recessive green alleles and had a green phenotype (Fig. A) .

Mendel published these results, but no one recognized the significance of his research until after his death. Later in life he became the abbot of a monastery and did not pursue his genetics research. 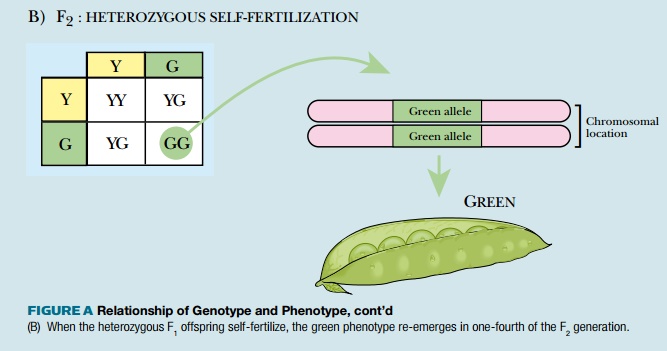