The upcoming discussions introduce the organisms used extensively in molecular biology and genetics research. Each of these has genes made of DNA that can be manipulated and studied.

The upcoming discussions introduce the organisms used extensively in molecular biology and genetics research. Each of these has genes made of DNA that can be manipulated and studied. Thus a discussion of the basic structure of DNA is essential. The genetic information carried by DNA, together with the mechanisms by which it is expressed, unifies every creature on earth and is what determines our identity.

Nucleic acids include two related molecules, deoxyribonucleic acid (DNA) and ribonucleic acid (RNA). DNA and RNA are polymers of subunits called nucleotides, and the order of these nucleotides determines the information content. Nucleotides have three components: a phosphate group, a five-carbon sugar, and a nitrogen-containing base (Fig. 1.3). The five-carbon sugar or pentose is different for DNA and RNA. DNA has deoxyribose, whereas RNA uses ribose. These two sugars differ by one hydroxyl group. Ribose has a hydroxyl at the 2′ position that is missing in deoxyribose. There are five potential bases that can be attached to the sugar. In DNA, guanine, cytosine, adenine, or thymine is attached to the sugar. In RNA, thymine is replaced with uracil (see Fig. 1.3).

The nucleic acid bases jut out from the sugar phosphate backbone and are free to form connections with other molecules. The most stable structure occurs when another single strand of nucleotides aligns with the first to form a double-stranded molecule, as seen in the DNA double helix. Each base forms hydrogen bonds to a base in the other strand. The two strands are antiparallel, that is, they run in opposite directions with the 5′end of the first strand opposite the 3′end of its partner and vice versa.

The bases are of two types, purines (guanine and adenine) and pyrimidines (cytosine and thymine). Each base pair consists of one purine connected to a pyrimidine via hydrogen bonds. Guanine pairs only with cytosine (G-C) via three hydrogen bonds. Adenine pairs only with thymine (A-T) in DNA or uracil (A-U) in RNA. Because an adenine-thymine (A-T) or adenine-uracil (A-U) base pair is held together with only two hydrogen bonds, it requires less energy to break the connection between the bases than in a G-C pair.

The double-stranded DNA takes the three-dimensional shape that has the lowest energy constraints. The most stable shape is a double-stranded helix. The helix turns around a central axis in a clockwise manner and is considered a right-handed helix. One complete turn is 34 Å in length and has about 10 base pairs. DNA is not static, but can alter its conformation in response to various environmental changes. The typical conformation just described is the 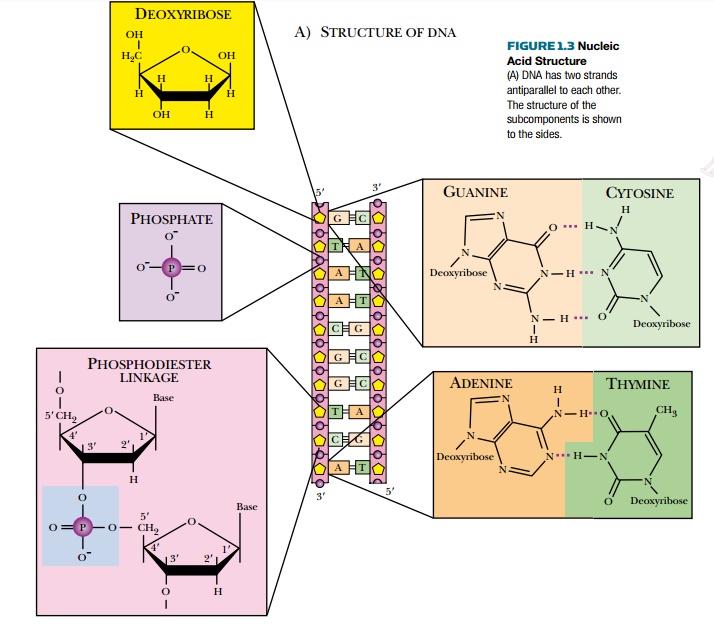 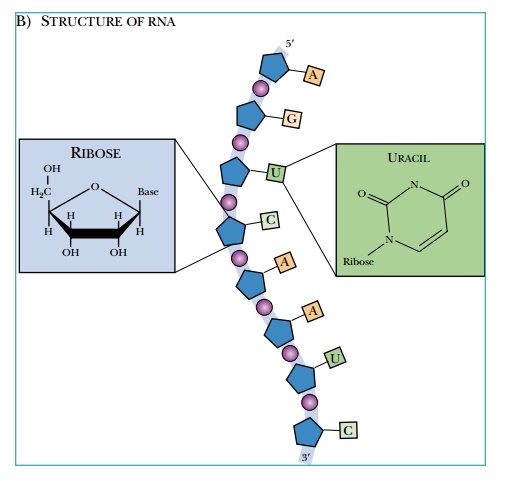 B-form of DNA and is most prevalent in aqueous environments with low salt concentrations. When DNA is in a high-salt environment, the helix alters, making an A-form that has closer to 11 base pairs per turn. Another conformation of DNA is the Z-form, which has a left-handed helix with 12 base pairs per turn. In this form, the phosphate backbone has a zigzag conformation. These two forms may be biologically relevant under certain conditions.

DNA and RNA are both structures with alternating phosphate and sugar residues linked to form a back-bone. Base residues attach to the sugar and project out from the backbone. These bases can base-pair with another strand to form double-stranded helices.