Bacteria as the Workhorses of Biotechnology

Only a tiny selection of these organisms has been studied in the molecular biology laboratory. These few generally have special traits or features that make them easy to grow, study, and manipulate genetically.

BACTERIA AS THE WORKHORSES OF BIOTECHNOLOGY

DNA is the common thread of life. DNA is found in every living organism on earth (and even in some entities that are not considered living—see later discussion). Only a tiny selection of these organisms has been studied in the molecular biology laboratory. These few generally have special traits or features that make them easy to grow, study, and manipulate genetically. By now, each model organism has had its entire genome sequenced. The model organisms are used both as a guide to understand other related organisms not investigated in detail and for various more practical biotechnological purposes.

Bacteria live everywhere on the planet and are an amazing part of the ecosystem. There are an estimated 5 × 1030 bacteria on the earth, with about 90% of these living in the soil and the ocean subsurface. If this estimate is accurate, then about 50% of all living matter is microbial. Bacteria have been found in every environmental niche. Some bacteria live in icy lakes of Antarctica that only thaw a few months each year. Others live in extremely hot environments such as hot sulfur springs or the thermal vents at the bottom of the ocean (Fig. 1.5). There has been great interest in these extreme microbes because of their physiological differences. 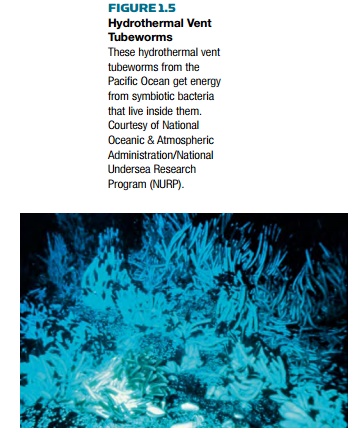 For example, Thermus aquaticus, a bacterium from hot springs, can survive at temperatures near boiling point and at a pH near 1. Like others, this bacterium replicates its DNA using the enzyme DNA polymerase. The difference is that T. aquaticus DNA polymerase has to function at high temperatures and is therefore considered thermostable. Molecular biologists have exploited this enzyme for procedures like polymerase chain reaction or PCR, which is carried out at high temperatures. Other bacteria from extreme environments provide interesting proteins and enzymes that may be used for new procedures. Hydrothermal vents found on the ocean floor have revealed a fascinating array of novel organisms (see Fig. 1.5). Water temperatures in different vents range from 25°C to 450°C.

Bacteria are highly evolved into every niche of the planet and provide researchers with many unique properties.