The following tasks are for strengthening your understanding. (English Book back answers and solution for Exercise grammar questions) 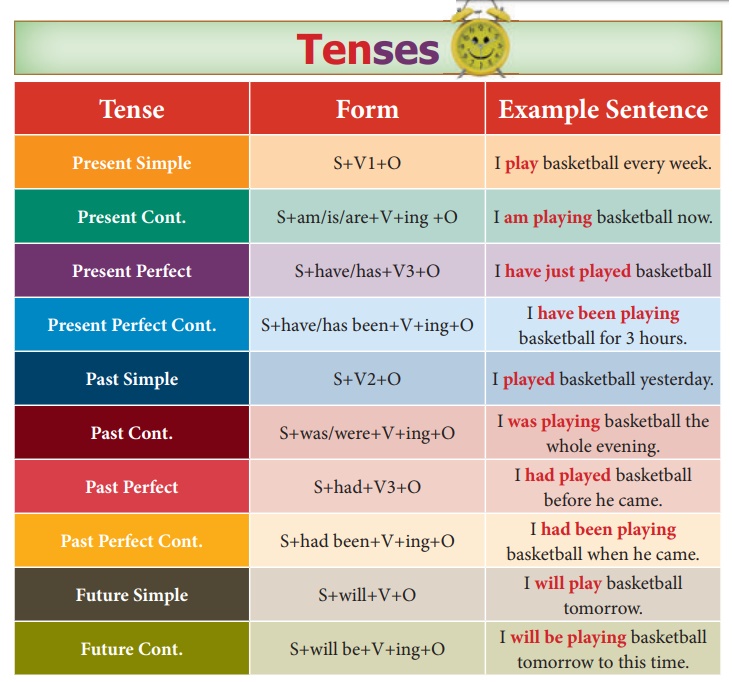 The following tasks are for strengthening your understanding.

Tick the correct options and complete the dialogue.

A. Hello. What do you watch / are you watching?

B. A programme about the Jallian Wala Bagh massacre, which I recorded last night. I study / I’m studying about it this term.

C. All that I know / I’ve known about it is that hundreds of people died / had died in it.

Yes, it was much, much worse than anyone has expected / had expected. It went on / has gone on for hours. Do you want / Have you wanted to watch the programme with me?

A. No, thanks. I’ve got to do some veena practice. I’ve just remembered / I just remembered that we’ve got a concert tomorrow, and I don’t have / haven’t had time to practise my new piece this week.

B. OK. I’ve already done / I already did my practice, so I’ve got time to watch TV. See you later.

Complete the sentences with the correct tense form of the verbs in brackets.

a) Tell (tell) me exactly what happened (happen) last night!

b) Mrs. Mageswari is my Maths teacher. She has been teaching (teach) me for four years.

c) I never think (never /think) of a career in medicine before I spoke to my Biology teacher but now I am seriously considering (seriously/ consider) it.

d) Oh no! I forgot (forget) to bring my assignment! What am I going to do? This is the second time I did (do) this!

e) I can’t remember what my teacher said (say) yesterday about our homework. I did not listen (not listen) properly because Hussain was talking (talk) to me at the same time.

f) Last year we went (go) on a school trip to Kanyakumari. We had (have) a very interesting time.

g) At the moment I am thinking (think) about what course to pursue next year but I have not made ( not make) a final decision yet.

Fill in the blanks with the correct form of the verbs given in the brackets.

a) Everyone was sleeping when the earthquake hit the small town. (sleep)

b) Evangelene quit / quitted  her job a couple of years ago. (quit)

c) Where  did you spend  your last holidays? (you spend)

d) I think Suresh will leave for Tiruvallur next morning. (leave)

e) I was angry that I made such a mistake (make).

f) My mother was tired yesterday because she well the night before did not sleep (not sleep).

g) Her parents will be in Coimbatore for two weeks from today (be).

h) Nothing much happened  I got to the meeting (happen).

j) Sh! Someone listens to our conversation! (listen)

k) The plane will take off off in a few minutes. (take)

l) They were talking about me when I interrupted their conversation. (talk)

m) Justin and his parents are living  in an apartment right now because they can’t find a cheap house. (live)

n) Rajini Prem’s family is in Chengalpet now. (be).

o) Yusuf  goes to the movies once in a while (go)

q) Our team did not win any games last year. (not win)

r) We saw a wonderful film at the cinema last night. (see)

s) Hurry up! The movie had already begun (already begin)

(ii) The rich should help the poor. (‘should’ shows moral obligation)

(iii) It may rain today. (‘may’ shows possibility)

In the above sentences, ‘drive’, ‘help’ and ‘rain’ are Main Verbs whereas ‘Can’, ‘Should’ and ‘May’ are Helping Verbs that denote particular moods, expressions or conceptions of the mind. Here ‘can’ ‘should’ and ‘may’ express ‘ability’, ‘moral obligation’ and ‘possibility’ respectively. Since these auxiliaries denote moods or expressions, they are called Modal Auxiliaries.

Modal Auxiliary is a special auxiliary which is used to denote a particular mood or expression of the subject. 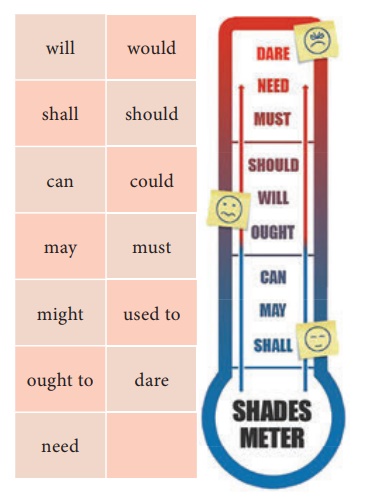 There are 13 Modal Auxiliaries (four of which are quasi-modals / marginal ).

The following table will help you understand better. 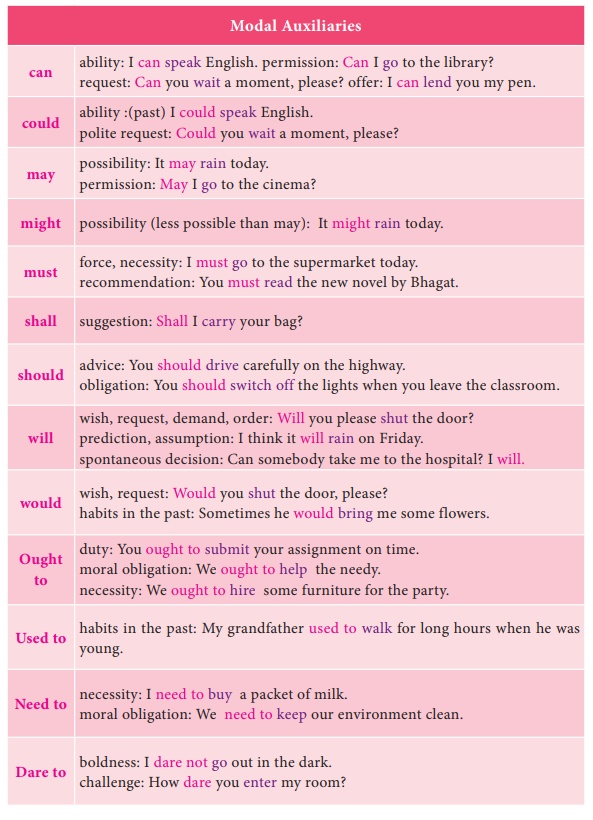 Fill in the blanks with modal auxiliaries.

a) The candidates must / should answer five out of ten questions.

b) How dare you open my bag?

c) Tajudeen will finish this work by Monday.

d) Shall I go to school today?

e) I wish you will tell me the truth

f) Poonam could not catch the bus yesterday.

g) People who live in glass houses should not throw stones.

h) You  need not go to the market as I have brought vegetables.

i) Can you have taken all this trouble?

l) Hima Das ran so fast that she  could win the medal.

m) You can lead a horse to water, but you cannot make it drink.

n) I would like to have a cup of coffee.

o) My grandfather used to visit this temple when he was young.

Complete the following sentences with modals using the clues given.

a) You ought to help the needy. (moral obligation)

b) If I were you, I would not behave like that. (conditional sentence)

c) I will never tell a lie. (determination)

d) My uncle may/ might have reached by now. (possibility)

e) The patient is critical. He must be taken to the hospital.(compulsion)

f) I used to to play hockey when I was a student. (past habit)

g) You should not attend my class. (order)

j)He will play the match. (willingness)

k) You need not waste time on it. (necessity)

l)Had the doctor come in time, he might have saved the patient.(probability)

Reported Speech is the way we represent / report the speech of other people or what we ourselves say.

Refer Class XI for the rules governing transformation of sentences from direct to reported speech.

Read what these people say and rewrite as sentences.

Raja : said that he was very busy.

Satya said that she had completed her work.

Johnson said that he did not like to go out.

Akshita said that she had just come back from Chennai.

Jayan said that he was learning English.

Madhu said that he had bought a pen the previous day / the day before.

Joseph and Mary said that they would go for shopping the next day. / the day after.

Afsar and Ayesha said that they could not attend the party.

Satish asked how I was.

Victor said that he was fine and thanked me.

Read the following dialogue and complete the report in the space provided.

Priya : Where are you going?

Vijay : I am going to the railway station.

Priya : Why are you going there?

Vijay : I want to receive my uncle who is coming from Bangalore.

Priya asked Vijay (a) where he was going?

Priya further inquired    (c) Vijay why he was going there.

Vijay stated that  (d) he wanted to receive his uncle who was coming from Bangalore.

Teacher : Why are you late?

Teacher : You should have reached the bus stop on time.

Teacher : I am sorry. What ails her?

The teacher asked Divya why she was late. Divya replied that (a) she had missed the bus.The teacher told her that (b) she should have reached the bus stop on time. Divya said that her grandmother was ill so she had to take her to the doctor. The teacher felt sorry and further asked her (c) what ailed her. Divya explained that she (d) had high fever.

Direct Speech (Question): Pradeep got out of bed with much excitement. “It is going to be a lovely sunny day,” he remarked to his sister Varshini.

Indirect speech (Answer): Pradeep told his sister Varshini that it was going to be a lovely sunny day.

Direct Speech (Question): “Just let me sleep a bit longer, Pradeep,” Varshini begged, “and since you are feeling so enthusiastic, ”

Indirect speech (Answer): Varshini begged Pradeep to let her sleep a bit longer and added that since he was feeling so enthusiastic.

Direct Speech (Question): she suggested, “Why don’t you go and help mother in cooking?”

Indirect speech (Answer): Pradeep replied Varshini that surely, he would. Pradeep asked his mother if / whether he could help her.

Direct Speech (Question): “Yes, of course. There are idlis and vadas on the dining table. Have your breakfast.”

Indirect speech (Answer): Mother agreed and told that there were idlis and vadas on the dining table and mother told her son to have his breakfast.

Direct Speech (Question): “Thank you, mum; I’ll surely help you by eating them.”

Indirect speech (Answer): Pradeep thanked her and added that he would surely help her by eating them.