Glucagon and Its Functions

Glucagon, a hormone secreted by the alpha cells of the islets of Langerhans when the blood glucose concen-tration falls, has several functions that are diametri-cally opposed to those of insulin.

Glucagon and Its Functions

Like insulin, glucagon is a large polypeptide. It has a molecular weight of 3485 and is composed of a chain of 29 amino acids. On injection of purified glucagon into an animal, a profound hyperglycemic effect occurs. Only 1 mg/kg of glucagon can elevate the blood glucose concentration about 20 mg/100 ml of blood (a 25 per cent increase) in about 20 minutes. For this reason, glucagon is also called the hyperglycemichormone.

The major effects of glucagon on glucose metabolism are (1) breakdown of liver glycogen (glycogenolysis) and (2) increased gluconeogenesis in the liver. Both of these effects greatly enhance the availability of glucose to the other organs of the body.

Glucagon Causes Glycogenolysis and Increased Blood Glucose Concentration. The most dramatic effect of glucagon isits ability to cause glycogenolysis in the liver, which in turn increases the blood glucose concentration within minutes.

It does this by the following complex cascade of events:

2. Which causes the formation of cyclic adenosinemonophosphate,

5. Which activates phosphorylase b kinase,

7. Which promotes the degradation of glycogen into glucose-1-phosphate,

8. Which then is dephosphorylated; and the glucose is released from the liver cells.

This sequence of events is exceedingly important for several reasons. First, it is one of the most thoroughly studied of all the second messengerfunctions of cyclic adenosine monophosphate. Second, it demonstrates a cascade system in which each succeeding productis produced in greater quantity than the preceding product. Therefore, it represents a potent amplifying mechanism; this type of amplifying mechanism is widely used throughout the body for controlling many, if not most, cellular metabolic systems, often causing as much as a millionfold amplification in response.This explains how only a few micrograms of glucagon cancause the blood glucose level to double or increase even more within a few minutes.

Infusion of glucagon for about 4 hours can cause such intensive liver glycogenolysis that all the liver stores of glycogen become depleted.

Glucagon Increases Gluconeogenesis. Even after all theglycogen in the liver has been exhausted under the influence of glucagon, continued infusion of this hormone still causes continued hyperglycemia. This results from the effect of glucagon to increase the rate of amino acid uptake by the liver cells and then the conversion of many of the amino acids to glucose by gluconeogenesis. This is achieved by activating multi-ple enzymes that are required for amino acid transport and gluconeogenesis, especially activation of the enzyme system for converting pyruvate to phospho-enolpyruvate, a rate-limiting step in gluconeogenesis.

Other Effects of Glucagon

Most other effects of glucagon occur only when its concentration rises well above the maximum normally found in the blood. Perhaps the most important effect is that glucagon activates adipose cell lipase, making increased quantities of fatty acids available to the energy systems of the body. Glucagon also inhibits the storage of triglycerides in the liver, which prevents the liver from removing fatty acids from the blood; this also helps make additional amounts of fatty acids available for the other tissues of the body

Glucagon in very high concentrations also (1) enhances the strength of the heart; (2) increases blood flow in some tissues, especially the kidneys; (3) enhances bile secretion; and (4) inhibits gastric acid secretion. All these effects are probably of minimal importance in the normal function of the body.

This is demonstrated in Figure 78â€“10, showing that a decrease in the blood glucose concentration from its normal fasting level of about 90 mg/100 ml of blood down to hypoglycemic levels can increase the plasma concentration of glucagon severalfold. Conversely, increasing the blood glucose to hyperglycemic levels decreases plasma glucagon. Thus, in hypoglycemia, glucagon is secreted in large amounts; it then greatly increases the output of glucose from the liver and thereby serves the important function of correcting the hypoglycemia. 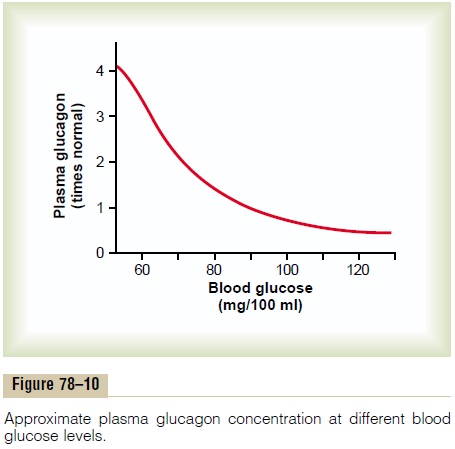 Increased Blood Amino Acids Stimulate Glucagon Secretion. High concentrations of amino acids, as occur in the blood after a protein meal (especially the amino acids alanine and arginine), stimulate the secretion ofglucagon. This is the same effect that amino acids have in stimulating insulin secretion. Thus, in this instance, the glucagon and insulin responses are not opposites.

The importance of amino acid stimulation of glucagon secretion is that the glucagon then promotes rapid conversion of the amino acids to glucose, thus making even more glucose available to the tissues.

Exercise Stimulates Glucagon Secretion. In exhaustiveexercise, the blood concentration of glucagon often increases fourfold to fivefold. What causes this is not understood, because the blood glucose concentration does not necessarily fall. A beneficial effect of the glucagon is that it prevents a decrease in blood glucose.

One of the factors that might increase glucagon secretion in exercise is increased circulating amino acids. Other factors, such as b-adrenergic stimulation of the islets of Langerhans, may also play a role.