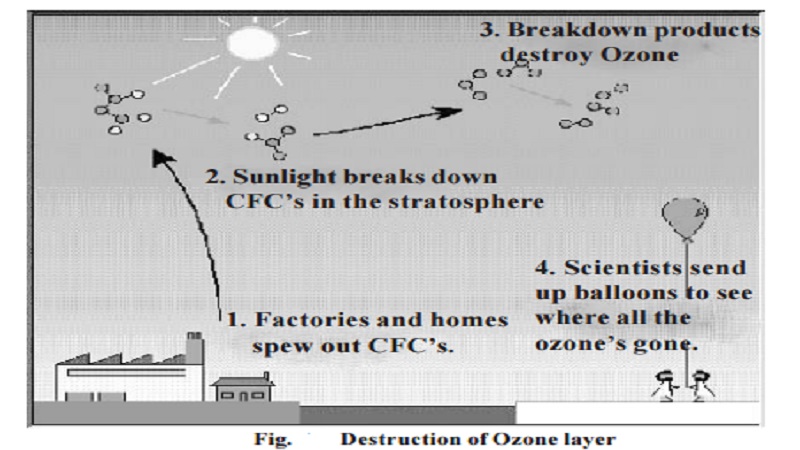 lobal warming refers to an average increase in the earth's temperature, which in turn causes changes in climate. During the past 4.65 billion years of its history, earth has warmed many times. But at present it is facing a rapid warming mainly due to human activities. The average temperature of earth is about 590F (150C).

Global warming refers to an average increase in the earth's temperature, which in turn causes changes in climate. During the past 4.65 billion years of its history, earth has warmed many times. But at present it is facing a rapid warming mainly due to human activities. The average temperature of earth is about 590F (150C). During the last century this average has risen by about 10F. By the year 2100, it is believed that the rise would be between 2.5 and 10.40F. This will cause dramatic changes such as rise in sea level, changes in rainfall patterns, wide range of impacts on plants, wildlife and humans.

The trapping of energy from the sun by certain gases in the atmosphere leading to the rise in earth's temperature is known asGreen house effect. Hence these gases are known as green house gases. Some gases such as water vapour, carbon dioxide, nitrous oxide and methane act as the trap. These gases absorb and reflect infra-red waves radiated by earth. By doing so, these gases conserve heat as the glass in a green house does.

Normally all life on earth depends on this green house effect. If it does not exist, earth would be cooled, and ice would cover earth from pole to pole. But if the greenhouse effect becomes strong it could make the earth warmer than usual. Even a little extra warming may cause problems for humans, plants and animals.

In the environment, greenhouse gases occur (i) naturally or (ii) from human activities.

The most abundant greenhouse gas is carbon dioxide. It reaches the atmosphere due to volcanic eruptions, respiration of animals, burning and decay of organic matter such as plants. Normally carbon-dioxide is removed by the plants by photosynthesis. Carbon-dioxide is also absorbed into ocean water. But humans by their activities increase the release of carbon dioxide into the atmosphere . Such activities include burning of fossil fuels, solid wastes, wood and wood products to drive vehicles, generate electricity etc. At the same time due to deforestation, the number of trees available to absorb carbon-dioxide through photosynthesis has been greatly reduced.

Human activities have caused carbon - dioxide to be released to the atmosphere at rates much faster than that at which earth's natural processes can recycle this gas. There were about 281 molecules of carbon-dioxide per million molecules of air (i.e., parts per million or ppm) in 1750. Today atmospheric carbon-dioxide concentrations are 368 ppm, a 31% increase.

Methane traps 20 times more heat than carbon-dioxide. It is emitted during the production and transport of coal, natural gas and oil. It is also emitted from rotting organic waste in sand fills, by the cows as a by product of digestion. Since 1750, the amount of methane in the atmosphere has more than doubled.

Nitrous Oxide traps 300 times more heat than carbon-dioxide. burning fossil fuels and ploughing farm soils releases nitrous oxide. Since 1750 its level increased by 17%. Hydrocarbons formed from the manufac-ture of foams, coolants such aschlorofluorocarbons used in refrigerators are the other gases responsible for global warming.

In 2000, scientists discovered an alarming increase in the level of a new gas called trifluoromethyl sulphur penta fluoride. Eventhough the gas is rare, it traps more effectively than all other greenhouse gases. The saddest part of it is that the industrial source of the gas is not yet identified.

2.Seasons will be longer in some areas.

3. The warmed world will be generally more humid and greater humidity will increases the rainfall.

4.Storms are expected to be more frequent and intense.

5.Some regions of the world would become dry.

6.  Wind blows will be harder and in different patterns. Hurricane would be more severer.

7.Weather patterns would be less prediclable and more extreme.

8.  Crops and forests may be affected by more insects and plant diseases.

9. Animals and plants will find it difficult to adjust to the changed environment. Animals will tend to migrate toward the poles and toward higher elevations.

10.  Some types of forests may disappear.

11. More people will get sick or die from heat stress.

12.Tropical diseases such as malaria, dengue fever, yellow fever and encephalitis will spread to other parts of the world.

Two major ways are there to control global warming: 1. to keep the carbon-dioxide out of the atmosphere by storing the gas or its carbon component somewhere else, a strategy called carbon sequestration. 2. to reduce the production of green house gases.