The diagram (Figure 1.6) gives clear idea about the relationship of geography with other disciplines.

While defining geography, we have seen that some branches of geography have strongest affiliations with subjects like mathematics and environmental sciences, while others have very close connection with history and sociology. Some subjects deal with distinctive type of phenomena while geography examines several kinds of phenomena together. The diagram (Figure 1.6) gives clear idea about the relationship of geography with other disciplines. 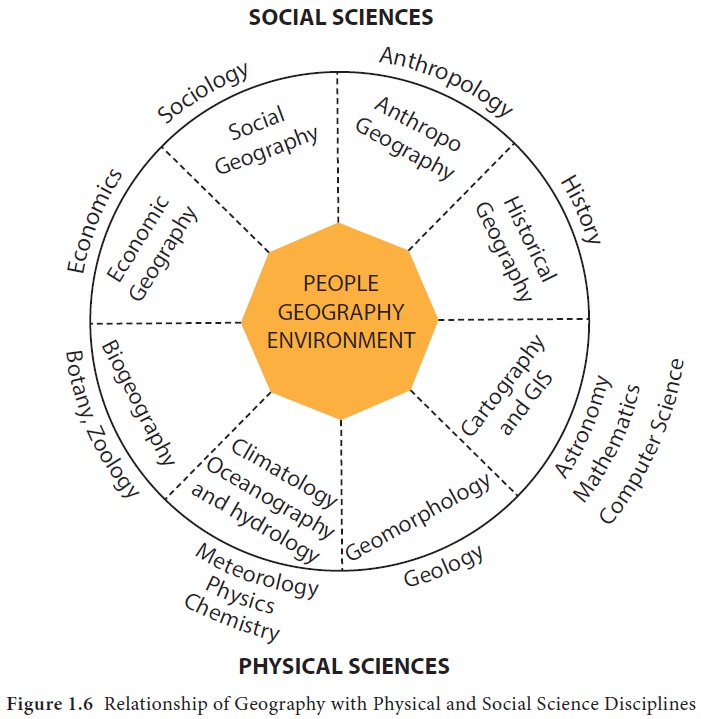 Astronomy basically deals with the celestial bodies including stars, planets, satellites, their motions, constellations, as well as different kinds of phenomena occurring in the outer space. The precise location, nature of movements, form and size of celestial bodies, including those of the solar system, have been accurately measured with the help of mathematics. The interaction of astronomy, mathematics and computer science with geography has paved way for the development of modern cartography and GIS.

Geology is the study of rocks, their types, distribution, mineral content, petroleum, etc. The subject investigates all these phenomena, classify them and put them in a sequence. Geography interacts with the subject in studying the distribution of exposed rocks, interaction with climate and human activities, economic prospects of the minerals and so on. Interaction between geology and geography leads to formation of the new branch of study called geomorphology, the study of landforms.

As geography is the study of variable phenomena on the earth’s surface, the dynamic mechanism of the phenomena requires to be studied within the framework of physics. The physics of atmosphere is studied under climatology and the physics of hydrosphere through oceanography, and both the subjects investigate, interpret and explain the atmospheric and hydrological processes. The chemical contents of rocks, soil, surface and groundwater, atmosphere are the interests of the geographers. They study how the physical and chemical contents are disturbed by human activities and vice versa.

The systematic branches of botany and zoology have traditionally been confined to the classification and description of various kinds of species on the earth’s surface. Geography, being the study of the spatial section of earth’s surface, attempts to study the distributional aspects of flora and fauna especially with reference to climate and relief. The integration among these subjects has given birth to biogeography.

Economics is concerned with how human needs and wants are satisfied with the available resources. Economic geography is concerned with the study of resources endowment and patterns of utilisation. The economic activities of the human beings including agriculture, fishing, forestry, industries, trade and transport are studied in this branch. The economic activities are highly influenced by the relief and climatic factors of the region or the country. Therefore, economics and geography have close links with each other, especially for integrated resources development.

Sociology is mainly concerned with the institutional aspects of the society. A number of investigations including social behaviour, movement of people between rural-urban areas, spatial interactions between social groups, the relations between innovation and tradition in rural and urban areas etc., have been jointly undertaken by sociologists and geographers in different countries of the world. Social geography is the logical expression of the interaction between sociology and geography as it studies social phenomena in spatial context.

History is a framework of events as per time and place. Geography attempts to study these events with reference to the physical earth and depict the places of historical events using thematic maps. Anyone who attempts to study any historical events of India should always integrate the temporal and the spatial phenomena of that period together to arrive at a conclusion.

History reveals to us that how  the  Great  rulers like Raja Raja Chola or Rajendra Chola had trade relations with other countries of the world, especially South Asian countries by understanding the relief, seasons, ocean current movements etc., The sailors would have been experts in every aspect of geography to move their troops, sail overseas and trade with all known nations of that time. They also utilised the ocean currents to transport teak and other valuable timbers from Indonesia, Myanmar, and other countries to South India.