Like the major traditions identified in geography, the significant themes of the subject are also identified.

In any subject there will be certain themes, around which the scholars work and contribute. In this way, geography subject also has certain traditional themes. Let us look at them carefully. In 1963, William D. Pattison identified the core themes of geographic studies as ‘The Four Traditions of Geography'.

These distinct, but related, traditions, of the discipline are: Spatial tradition (areal distributions and spatial patterns, Examples: Population movement) Area studies tradition, (hierarchy of areas, small to large) Main-land tradition (relationship between man and his physical environment) and Earth science tradition (processes of the earth). 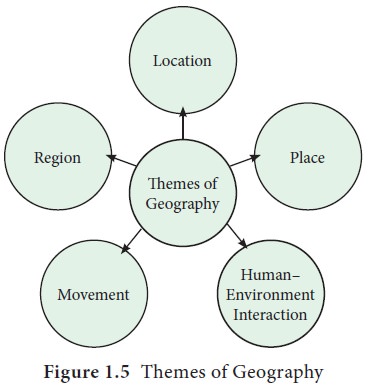 How might the ship that Columbus traveled have sailed at the time when no engine and power fuel available?

Themes   of   Geogra- phy are the educational tools for understanding the geography subject in detail. It was adopted in the year 1984 by the Association of American Geographers and these five themes were published in the National Council for Geo-graphic Education/Association of Ameri-can Geographers’ publication Guidelines for Geographic Education.

Like the major traditions identified in geography, the significant themes of the subject are also identified. The Association of American Geographers put forward the ‘Five themes of Geography’ and it has been widely accepted by geographers worldwide (Figure1.5). The themes are location, place, human – environment interaction, movement and regions.

Every point on earth has a location. The location can be described in two different ways:

Absolute location is a location as described by its latitude and longitude on the earth. For example, the coordinates of Chennai Central Railway station are 13°04'56" N latitude and 80°16'32" E longitude.

Relative location is the position of a place in relation to another well-known landmark. For example, Kallanai Dam or Grand Anicut is located roughly 350 km south –southwest of Chennai City. The absolute and relative location related surveys and studies fall under this category.

A place is an area that is defined by everything in it. All places have features that give them personality to distinguish them from other places. A number of place names in Tamil Nadu, like Redhills, Fort St. George, Mint, and George Town are examples to this theme.

Toponym: A place name, especially one derived from topographical feature.

Site: An area of ground on which a town, building, or monument is constructed.

Situation: The location and surround-ings of a place.

·           Dependency: How humans depend on the environment (Example: For water, fresh air, sunlight etc.)

·           Adaptation: How humans adapt to the environment (Example: Life in polar or desert regions)

Movement is the network of travel of people, goods and ideas from one location to another. Examples: Rural-urban migration and metro train commuting in Chennai. Air transport which carries people and goods and the internet that allows access to ideas and knowledge across the world are also examples of this kind.

Find the absolute location of your district.

·           Find the important towns within a radius of 100 km from your residence or school along with their direction.