a. Physical Geography b. Human Geography and c. Geographic Techniques.

Based on content and the available techniques, the discipline can be divided into three major domains. Each one has many sub divisions which deal with specific objectives (Figure 1.7). a. Physical Geography b. Human Geography and c. Geographic Techniques. 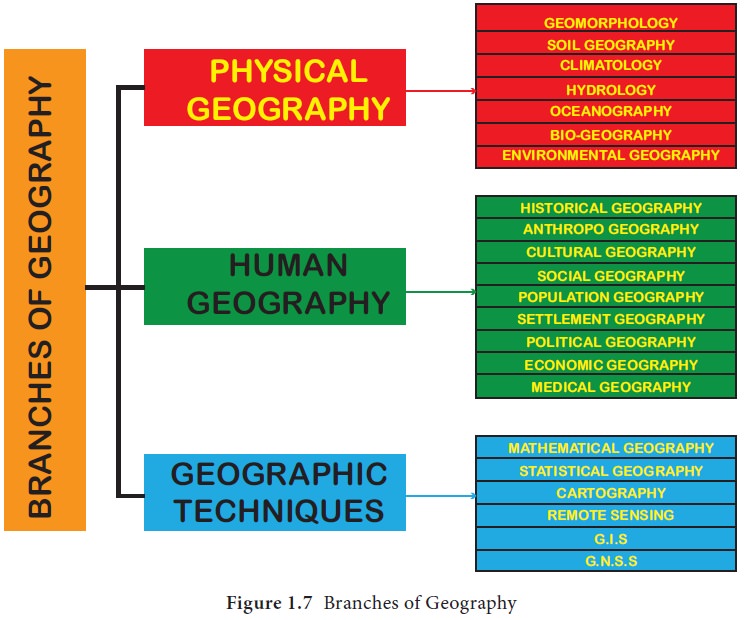 It is the study of natural features of the earth such as land, water, air and living organisms. The changes taking place within and among these natural features and their resultant features are studied under its various branches. The branches of physical geography are:

1.        Geomorphology deals with the distribution of land forms, their origin and the forces causing changes over these landforms. Geology provides basic information to the study of geomorphology.

2.        Soil Geography is a study related to soil formation, soil profile, soil types, their fertility level and distribution. Soil erosion and conservation measures are also dealt in this branch.

3.        Climatology deals with the study of global and regional weather and climatic conditions by analysing relevant statistical data. Meteorology provides basic information on the composition, structure and the changes in the atmosphere.

4.        Hydrology encompasses the study of earth’s realm of water such as oceans and surface water bodies like rivers, reservoirs and ponds. It also makes a study of underground water and its recharge and also pollution of water bodies.

5.        Oceanography is the study of seas and oceans. The shape, size, depth and bottom relief of ocean, distribution of oceans, ocean currents and various life forms existing in ocean are also studied under oceanography.

6.        Biogeography is a study of ecosystems over geographical space. It also analyses the changes in the ecosystems. Phytogeography or plant Geography, Zoo Geography or animal geography and Ecology are the branches of biogeography.

7.        Environmental Geography is the study of environmental issues arising out of misuse of various spheres of the earth and their implications. The ozone layer depletion, global warming, melting of polar ice caps, rising sea level and other related aspects are also given due importance. It also tries to give sustainable solutions to these problems.

Human Geography is concerned with the changes made by the humans over the natural or physical landscape. The ethnic and political aspects are taken into consideration. The issues like climatic change, natural and anthropogenic disasters are also the major concerns.

1.        Population Geography is the study of distribution and density of population, the changing patterns in age and sex composition, birth and death rates, life expectancy, literacy level and dependency ratio, migrations at national and international level and the causes and consequences of migration.

2.        Settlement Geography deals with the characteristics of rural and urban settlements and transportation network. It seeks better understanding of the present landscape and plans for the future. The study is more important for town and country planning.

3.        Historical Geography tries to picturise the geography of an area or region as it was in the past and studies how it has evolved over time. The forces involved in transforming region such as colonisation by the Europeans or a natural disaster are also included in the study.

4.        Anthropo Geography deals with the distribution of human communities on the earth in relation to their geographical environment.

5.        Cultural Geography gives emphasis on the location and diffusion of customs and cultural traits such as food habits, skills, clothing and beliefs and social organisations and their developments in different parts of the earth.

6.        Social Geography is closely related to cultural geography. It examines the relationships among the social groups and their social relationships in the places of their living.

7.        Political Geography tries to understand the countries and their neighbours, problems of resources sharing, boundaries and territorial limits. This branch is also concerned with understanding the political behaviour of the population, relations between independent states, and patterns of voting and delimitation of electoral constituencies.

1.        Mathematical Geography deals with the study of earth’s size and shape, motions of the earth, concept of time and the time zones.

2.        Statistical Geography is concerned with the practice of collecting, analysing and presenting data that has a geographic or areal dimension, such as census data.

3.        Cartography is the study of making maps of various scales using authentic information.

4.        Remote Sensing is the art, science and technique of capturing the earth surface features using sensors or cameras in airplanes or satellites, processing and presenting the spatial information tousers.

5.        Geographic Information System (GIS) is a computer-based tool of the recent decades for geographical studies. It is used for storing, retrieving, transforming, analysing, and displaying data to prepare useful thematic maps.

6.        Global Navigation Satellite System (GNSS) is used to pinpoint the geographic location of a user anywhere in the world. Airlines, shipping, travel agencies and automobile drivers use the system to track the vehicles and follow the best routes to reach the destination in the shortest possible time.

GNSS is the standard generic    term    for satellite navigation systems that provide geo-spatial positioning with global or regional coverage. This term includes the GPS (USA), GLONASS (Russia), Galileo (Europe), Beidou (China), IRNSS (India) and other systems. The GPS was the first GNSS system of the United States and originally used for military applications. Today it is commonly used in mobiles, vehicles, agriculture and other areas that allow us to use it in all fields of mapping.

Geography is undergoing frequent changes to tackle the challenges of the dynamic world. The subject is more flexible and accommodates many principles of related subjects. At the same time, it lends concepts and knowledge to many related disciplines. Owing to these changes, the subject is attaining more refinement, accuracy, precision, depth and scientific rationale.