A measuring system exists to provide information about the physical value of some variable being measured.

A measuring system exists to provide information about the physical value of some variable being measured. In simple cases, the system can consist of only a single unit that gives an output reading or signal according to the magnitude of the unknown variable applied to it.  However, in more complex measurement situations, a measuring system consists of several separate elements as shown in Figure1.1. 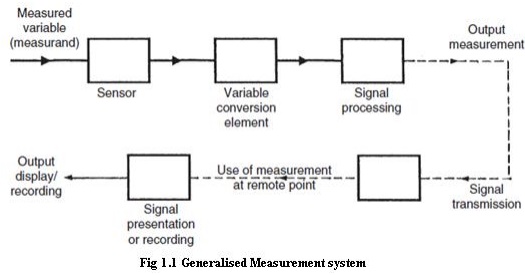 Table 1.1 Physical Quantities and its unit 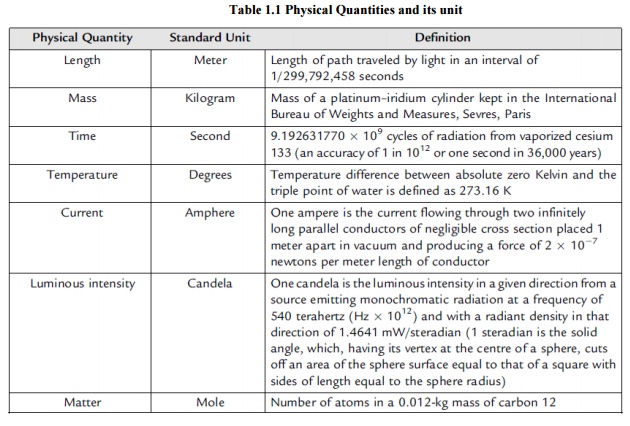 The term standard is used to denote universally accepted specifications for devices. Components or processes which ensure conformity and interchangeability throughout a particular industry. A standard provides a reference for assigning a numerical value to a measured quantity. Each basic measurable quantity has associated with it an ultimate standard. Working standards, those used in conjunction with the various measurement making instruments.

The national institute of standards and technology (NIST) formerly called National Bureau of Standards (NBS), it was established by an act of congress in 1901, and the need for such body had been noted by the founders of the constitution. In order to maintain accuracy, standards in a vast industrial complex must be traceable to a single source, which may be national standards.

The following is the generalization of echelons of standards in the national measurement system.

National standards: It includes prototype and natural phenomenon of SI (Systems International), the world wide system of weight and measures standards. Application of precise measurement has increased so much, that a single national laboratory to perform directly all the calibrations and standardization required by a large country with high technical development. It has led to the establishment of a considerable number of standardizing laboratories in industry and in various other areas. A standard provides a reference or datum for assigning a numerical value to a measured quantity.

Evidently, there is degradation of accuracy in passing from the defining standards to the shop floor standards. The accuracy of particular standard depends on a combination of the number of times it has been compared with a standard in a higher echelon, the frequency of such comparisons, the care with which it was done, and the stability of the particular standards itself.

The purpose of measurement is to determine the true dimensions of a part. But no measurement can be made absolutely accurate. There is always some error. The amount of error depends upon the following factors:

The terms precision and accuracy are used in connection with the performance of the instrument. Precision is the repeatability of the measuring process. It refers to the group of measurements for the same characteristics taken under identical conditions. It indicates to what extent the identically performed measurements agree with each other. If the instrument is not precise it will give different (widely varying) results for the same dimension when measured again and again. The set of observations will scatter about the

mean. The scatter of these measurements is designated as σ, the sta used as an index of precision. The less the scattering more precise is the instrument.

Distinction between Precision and Accuracy 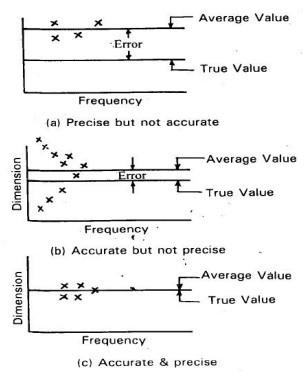 Factors affecting the accuracy of the Measuring System

The basic components of an accuracy evaluation are the five elements of a measuring system such as:

1.     Factors affecting the Standard: It may be affected by:

-Deformation in handling or use, when heavy work pieces are measured -Calibration errors

Higher accuracy can be achieved only if, ail the sources of error due to the above five elements in the measuring system are analyzed and steps taken to eliminate them. The above analysis of five basic metrology elements can be composed into the acronym SWIPE, for convenient reference where,