GAD and other psychiatric disorders such as major depressive disorder, often creates diagnostic and treatment dilemmas for the clinician and may complicate the difficult task of differential di-agnosis and treatment planning.

GAD and other psychiatric disorders such as major depressive disorder, often creates diagnostic and treatment dilemmas for the clinician and may complicate the difficult task of differential di-agnosis and treatment planning. This section will highlight the major disorders that should be considered in the differential di-agnosis of GAD (Figure 53.1). 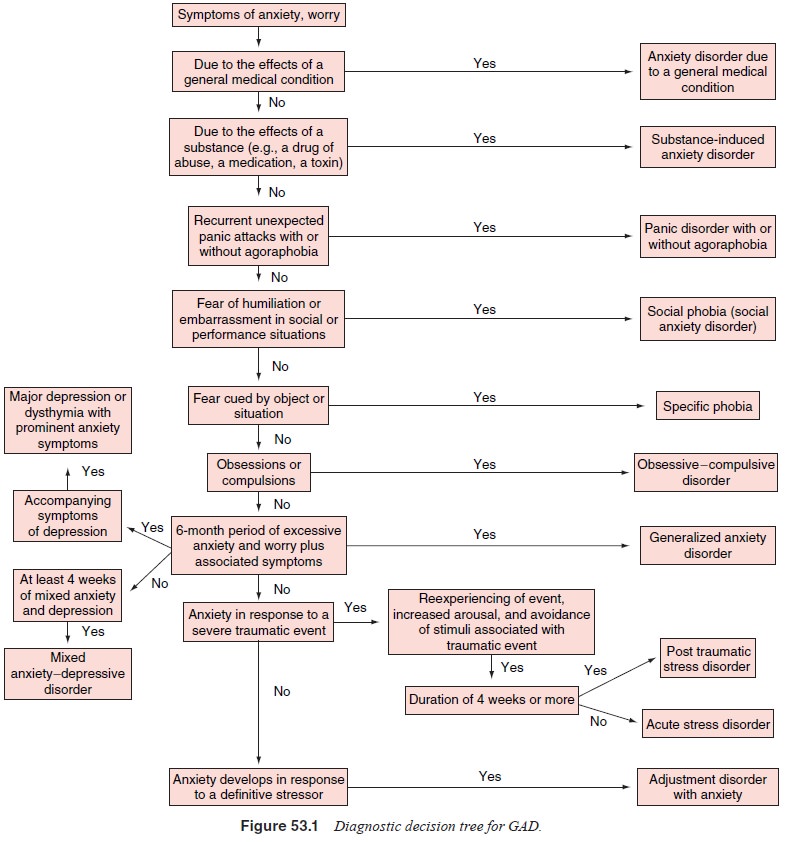 Some researchers have suggested that GAD is attributable to panic disorder. However, clear differences exist between GAD and panic disorder. For example, panic disorder is characterized by the presence of panic attacks; that is, recurrent, discrete epi-sodes of intense anxiety or fear associated with a cluster of so-matic symptoms reflecting autonomic hyperactivity such as rapid heartbeat, dizziness, numbness or tingling, trouble breathing or choking, and nausea or vomiting. In contrast, patients with GAD experience predominantly symptoms of muscle tension and vigi-lance such as fatigue, muscle soreness, insomnia, difficulty con-centrating, restlessness and irritability. Patients with panic disor-der tend to seek treatment earlier in life than patients with GAD. Additionally, reports of types of worry differ between those diagnosed with GAD and those with panic disorder. For exam-ple, panic patients worry about having additional panic attacks, whereas GAD patients worry unrealistically about a number of everyday issues.

Anxiety is part of the clinical picture of obsessive–compulsive disorder (OCD) and may be a central factor in initiating and main-taining obsessions and compulsions. Interestingly there are also some data suggesting that OCD and GAD may be related. For ex-ample, Black and associates (1992) found an increased prevalence of GAD among relatives of patients with OCD. However, several features distinguish the excessive worry that accompanies GAD from the obsessional thoughts of OCD. Obsessive thoughts are described as ego-dystonic intrusions that often take the form of urges, impulses, or images. They are often senseless and are fre-quently accompanied by time-consuming compulsions designed to reduce mounting anxiety. In contrast, the worries in GAD are about realistic concerns, such as health and finances.

In phobic disorders, the anxiety is characteristically associ-ated with a specific phobic object or situation that is frequently avoided by the patient. Such is the case with social anxiety dis-order as well, in which the individual is afraid of or avoids situ-ations in which he or she may be the focus of potential scrutiny by others. Anxiety is also a characteristic part of the presentation of post traumatic stress disorder (PTSD) and acute stress disor-der. However, unlike in GAD, the principal symptoms experi-enced in PTSD and acute stress disorder follow exposure to a traumatic event and are characterized by avoidance of reminders of the event and persistent reexperiencing of the traumatic event. In addition, in contrast to GAD which must last at least 6 months, acute stress disorder does not persist for more than 4 weeks. Finally, in adjustment disorders anxiety when present occurs in response to a specific life stressor or stressors and generally does not persist for more than 6 months (American Psychiatric Association, 1994).

Worry and anxiety are part of normal human behavior, and it may be difficult to define a cutoff point distinguishing normal or trait anxiety (i.e., a relatively stable tendency to perceive various situations as threatening) from GAD. However, in-dividuals suffering from a “disorder” exhibit significant dis-tress and impairment in functioning as a result of their anxiety symptoms.

Anxiety Disorder due to a General Medical Condition 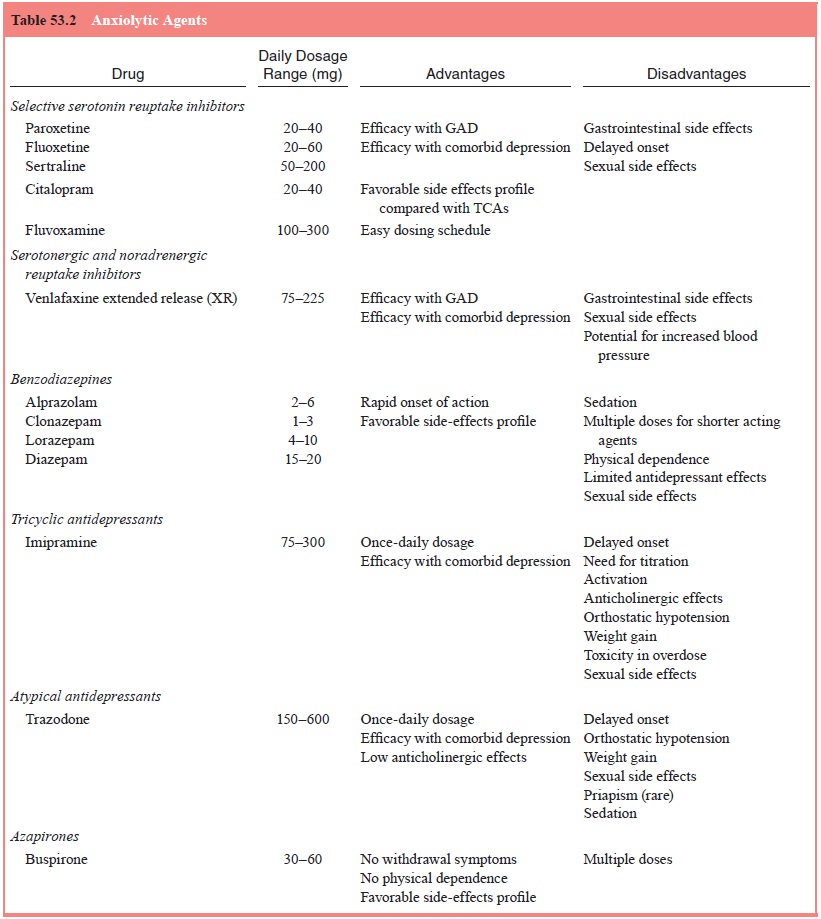 Anxiety is a prominent feature of hyperthyroidism with some overlap in the symptomatology of thyrotoxicosis and GAD. Symp-toms such as tachycardia, tremulousness, irritability, weakness and fatigue are common to both disorders. In GAD, however, the peripheral manifestations of excessive concentrations of circulat-ing thyroid hormones are absent, including symptoms such as weight loss, increased appetite, warm and moist skin, heat intol-erance and dyspnea on effort. Presence of goiter makes the diag-nosis of hyperthyroidism likely; however, the absence of thyroid enlargement does not exclude it. Thus, confirmatory laboratory tests (free T4, T3 and TSH) assume significant diagnostic impor-tance. In mild cases, laboratory tests may be within the upper limit of the normal range, in which case a thyroid releasing hor-mone stimulation test is indicated.

Pheochromocytomas, also known as chromaffin tumors, pro-duce, store and secrete catecholamines. They are derived most often from the adrenal medulla, as well as the sympathetic ganglia and occasionally from other sites. The clinical fea-tures of these tumors, most commonly hypertension and hy-pertensive paroxysms, are predominantly due to the release of catecholamines. Patients may also experience diaphoresis, tachycardia, chest pain, flushing, nausea and vomiting, head-ache and significant apprehension. Although the clinical pres-entation frequently mimics spontaneous panic attacks, pheo-chromocytomas should also be considered in the differential diagnosis of GAD. The diagnosis of pheochromocytoma can be confirmed by increased levels of catecholamines (epine-phrine and norepinephrine) or catecholamine metabolites (metanephrines and vanillylmandelic acid) in a 24-hour urine collection.

Menopause is commonly referred to as the period that encom-passes the transition between the reproductive years and beyond the last episode of menstrual bleeding. Frequently associated with significant anxiety, menopause should be considered in the differential diagnosis of GAD. However, other associated symptoms such as vasomotor instability, atrophy of urogenital epithelium and skin, and osteoporosis make the diagnosis of menopause probable. Another endocrinologic disorder, hyper-parathyroidism, can present with anxiety symptoms, and the ini-tial evaluation of serum calcium levels may be indicated. Finally, certain neurologic conditions such as complex partial seizures, intracranial tumors and strokes, and cerebral ischemic attacks may be associated with symptoms typically observed in anxiety disorders and may require appropriate evaluation.

Anxiety disorders can occur frequently in association with in-toxication and withdrawal from several classes of substances (see Table 53.1). Excessive use of caffeine, especially in children and adolescents, may cause significant anxiety. Cocaine intoxi-cation may be associated with anxiety, agitation and hypervigi-lance. During cocaine withdrawal, patients may also present with prominent anxiety, irritability, insomnia, fatigue, depression and cocaine craving. Adverse reaction to marijuana includes extreme anxiety that usually lasts less than 24 hours. Mild opioid with-drawal presents with symptoms of anxiety and dysphoria. How-ever, accompanying symptoms such as elevated blood pressure, tachycardia, pupilary dilatation, rhinorrhea, piloerection and lac-rimation are rare in patients with GAD.

The clinical phenomenology observed both in alcohol and sedative–hypnotic drug withdrawal and in GAD, although variable, may be highly similar. In both conditions, nervousness, tachycardia, tremulousness, sweating, nausea and hyperventila-tion occur prominently. Additionally, the same drugs (i.e., ben-zodiazepines) can be used to treat anxiety symptoms, and some patients may use alcohol in an attempt to alleviate anxiety. Thus, the symptoms of an underlying anxiety disorder may be difficult to differentiate from the withdrawal symptoms associated with the use of benzodiazepines or alcohol.