Retrospective and prospective reports indicate that the typical course of GAD is chronic, nonremitting, and that it often per-sists for a decade or longer.

Retrospective and prospective reports indicate that the typical course of GAD is chronic, nonremitting, and that it often per-sists for a decade or longer. Rickels and colleagues (1986) re-ported that two-thirds of patients treated initially with diazepam relapsed within 1 year of discontinuation of treatment. Other studies utilizing criteria prior to the DSM-III-R for GAD found comparable levels of chronicity, with almost half the patients re-porting moderate symptoms at follow-up (Yonkers et al., 2000).

HARP, a prospective, naturalistic study of 711 adults with DSM-III-R anxiety disorders, recruited initially from psychiat-ric clinics and hospitals in the Boston Metropolitan area, indi-cated that only 15% of those with GAD at baseline experienced a full remission for 2 months or longer at any time during the first year after baseline, and only 25% had a full remission in the 2 years after baseline (Yonkers et al., 1996). Further, among patients who experienced full or partial remission, 27 and 39% respectively, experienced a full relapse during a 3-year follow-up period (Yonkers et al., 2000). Chronicity of GAD was also asso-ciated with cluster B and C personality disorders or a concurrent Axis I comorbidity. Wittchen and coworkers (1994) found that approximately 80% of subjects with GAD reported substantial interference with their life, a high degree of professional help-seeking, and a high prevalence of taking medications because of their GAD symptoms. The disability associated with GAD was found to be similar to that found in individuals with panic disor-der or major depression.

GAD is a chronic, relapsing illness, which means that most treat-ments do not cure the patient. Furthermore, it also suggests that when treatments are discontinued, symptoms may return. It fol-lows that a thorough understanding of the long-term benefits and risks associated with the different treatments available is impor-tant. Thus, each case must be considered individually accord-ing to the severity and chronicity of the disorder, the severity of somatic symptoms, the presence of stressors, and the presence of specific personality traits. The clinician may also need to work with the patient to determine how much improvement is suffi-cient. For example, a reduction in disability may occur without a marked change in symptoms. Symptoms may persist but oc-cur less frequently, or their intensity may be reduced. All these variations have important treatment implications, including deci-sions regarding the need for long-term treatment. Patients with milder forms of GAD may respond well to simple psychologi-cal interventions, and require no medication treatment. In more severe forms of GAD, it may become necessary to see the pa-tient regularly and to provide both more specific psychological and pharmacological interventions. Figure 53.2 can be used as a guide to the treatment of GAD. 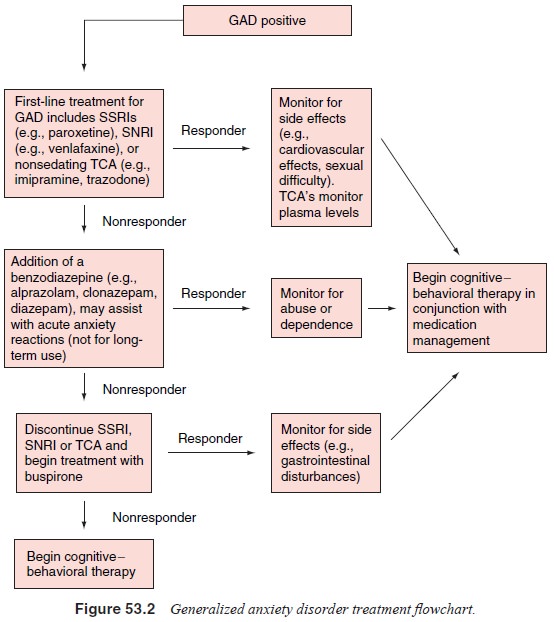 During the early (acute) phase of treatment, an attempt should be made to control the patient’s symptomatology. It may take 3 to 6 months for an optimal response to be achieved. How-ever, there may be a considerable variation in the length of the initial treatment phase. For example, clinical response to ben-zodiazepines occurs early in treatment. Response to other anxi-olytic medications or to cognitive–behavioral treatment gener-ally requires longer periods of time. During the maintenance phase, treatment gains are consolidated. Unfortunately, studies suggesting how long treatment should be continued are limited. Routinely, pharmacological treatment is continued for a total of 6 to 12 months before attempting to discontinue medications. Recent data indicate that “maintenance” psychotherapeutic treat-ments such as cognitive–behavioral therapy may be helpful in maintaining treatment gains in patients with anxiety disorders following the discontinuation of pharmacotherapy. It is clear that many patients may experience chronic and continuous symptoms that require years of long-term treatment.

The vast majority of patients with GAD who present for treat-ment have been ill for many years and frequently have received a variety of treatments. Some patients have been sent to psychia-trists for treatment as a “last resort” in order to learn how to cope with their various ill-defined somatic and emotional complaints. Patients may feel shame and guilt over their inability to control symptoms. They are often demoralized and angry, and feel that their symptoms are not taken seriously. Thus, it is important to help the patient understand their illness and to conceptualize it as a health problem rather than a “personal weakness”. Once the burden of perceived responsibility is lifted from the patient, and they believe that effective treatment of their illness is possible, a working alliance with the treating physician can begin. The treatment plan should be outlined clearly, and the patient cau-tioned that recovery may have a gradual, variable course. Finally, during the critical early stages of treatment, the clinician should make a special effort to be available in person or by phone to answer questions and provide support.