Most drugs used today are designed to treat symp-toms rather than cure the underlying disease.

Most drugs used today are designed to treat symp-toms rather than cure the underlying disease. Notable exceptions include cytotoxic chemotherapeutic agents and agents that restore or modulate hormone function. However, increased understanding of the molecular and genetic etiology of diseases may permit permanent modification of organ function by drug-oriented meth-ods. The first disease-associated gene, -globin, was cloned over 25 years ago. It is now theoretically possible to isolate, sequence, and analyze genes causally associ-ated with many heritable and acquired human diseases, including cystic fibrosis, Duchenne’s muscular dystro-phy, and Gaucher’s disease. Moreover, with the com-plete sequencing of the human genome, many of the es-timated 100,000 human genes may become candidates for genetic manipulations. Thus, it is now possible to propose molecular pharmacological and genetic ap-proaches to therapy . Many of these approaches fall un-der the general rubric of gene therapy.

Germ cell gene therapy will require considerable dis-cussion about ethical issues and extensive information before it can be applied to humans, but somatic cell gene therapy in humans is now being extensively explored. During the past 5 years in the United States alone, more than 500 human gene therapy clinical trials aimed at treating conditions ranging from inherited disorders such as cystic fibrosis to cancer and AIDS, have been ap-proved by the Office of Biotechnology Activities (OBA, formerly the Recombinant DNA Advisory Committee) of the National Institutes of Health. Nearly 3500 patients have been enrolled in these studies (Fig. 58.1). 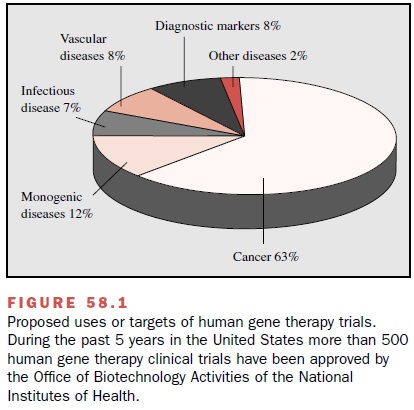 With few exceptions, gene therapy was considered safe if not particularly effective until the death of an 18-year-old man in 1999, the first fatal outcome for a pa- tient in a phase I gene therapy protocol. This death has stimulated a substantial review of the oversight mecha-nisms in human gene transfer research. One of the first successes of gene therapy was reported in 2000, when three infants with a fatal form of severe combined im-munodeficiency syndrome (SCID) received ex vivo gene therapy with a recombinant mouse leukemia viral vector encoding the γC receptor gene. After 10 months, γC transgene expression in T- and NK cells was de-tected and T-, B-, and NK-cell counts and function were comparable to those of age-matched controls.

Although numerous obstacles must be overcome before gene therapy will be routinely employed, a rig-orous approach to investigating the safety and efficacy of gene transfer will ensure that clinical strategies em-ploying genetic manipulation are rationally incorpo-rated into the therapeutic armamentarium.