A number of disorders can be treated with immuno-stimulating agents (also known as biological response modifiers or immunomodulating agents); these drugs enhance the body’s immune response.

A number of disorders can be treated with immuno-stimulating agents (also known as biological response modifiers or immunomodulating agents); these drugs enhance the body’s immune response. These conditions include immunodeficiency diseases, cancer, some types of viral and fungal infections, and certain autoimmune disorders. The drugs may work on cellular or humoral immune systems or both.

Immunostimulating agents are nonspecific; they cause general stimulation of the immune system. Among the agents capable of general potentiation of the immune sys-tem are extracts and derivatives from bacteria, yeast, and fungi. They also include a variety of peptides, cytokines, and synthetic compounds. In most cases, the pharmacol-ogy of these agents has not been well described. The most commonly used agents are discussed next.

Bacillus Calmette-Guérin (BCG) is a viable attenuated strain of Mycobacterium bovis. Nonviable strains of the bacterium also have been shown to augment the im-mune response. The smallest active compound derived from BCG thus far has been identified as muramyl dipeptide. The T cell is a principal target for BCG. It also appears to stimulate natural killer cells, which in turn can kill malignant cells. It has been suggested that BCG cross-reacts immunologically with tumor cell antigens.

BCG immunotherapy has been most successful in the treatment of bladder cancers. It is instilled directly into the bladder, where it is held for 2 hours before urination.

The most dangerous complications of BCG therapy are severe hypersensitivity and shock. Chills, fever, malaise, immune complex, and renal disease are among the other side effects. The route of administration influ-ences the nature of the side effects.

Levamisole (Ergamisol) was originally developed as an antihelminthic drug . It potentiates the stimulatory effects of antigens, mitogens, lymphokines, and chemotactic factors on lymphocytes, granulocytes, and macrophages. It has been shown to increase T cell–mediated immunity.

Levamisole has been used successfully in treating chronic infections. It also has been approved for use in combination with fluorouracil in the treatment of col-orectal cancer.

Immune globulin is isolated from pooled human plasma either from donors in the general population or from hyperimmunized donors. It is used principally in the treatment of certain immune deficiencies. Standard im-mune globulin solutions contain a distribution of all subclasses, with antibody titers for most major bacterial, viral, and fungal pathogens.

The principal side effects are possible anaphylactoid reactions and severe hypotension.

Thymic factors are naturally occurring substances that promote T-lymphocyte differentiation and differentia-tion of early stem cells into prothymocytes. Each of the available preparations (e.g., thymic humoral factor, thy-mosin fraction 5, and thymodulin) are mixtures of sev-eral polypeptides isolated from a calf thymus extract.

By promoting the formation of T lymphocytes, thymic factors are used to enhance T-lymphocytic func-tions. Thymic factors have been used with some success in clinical trials in patients with severe combined im-munodeficiency, DiGeorge’s or Nezelof’s syndrome, and viral disorders. Studies with thymodulin show promise in treating symptoms in asthmatics and pa-tients with allergic rhinitis. The primary consideration in the use of thymic factors for immunodeficiency states is the presence of T-lymphocyte precursors.

Few major side effects have been reported, espe-cially with purer forms produced by genetic engineer-ing. Crude thymic preparations have produced allergic side effects in some patients.

An exciting application of immunomodulating therapy is in the use of cytokines (lymphokines, monokines). As mentioned earlier, immune cell function is regulated by cytokines produced by leukocytes or other supporting cells. With the advent of genetic engi-neering, cytokines can be produced in pure form and in large quantities.

IL-2 (Proleukin) is a cytokine that promotes the prolif-eration, differentiation, and recruitment of T and B lym-phocytes, natural killer cells, and thymocytes. Human recombinant IL-2 is designated as rIL-2. rIL-2 binds to IL-2 receptors on responsive cells and induces prolifer-ation and differentiation of T helper cells and T cyto-toxic cells. It also can induce B-lymphocyte prolifera-tion, activate macrophage activity, and augment the cytotoxicity of natural killer cells.

rIL-2 is administered systemically as an immunos-timulating agent in patients with AIDS and to augment specific antitumor immunity. Patients with renal cell carcinoma or melanoma have been effectively treated with rIL-2 in combination with adoptive transfer im-munotherapy. The latter refers to the injection of the patient’s own cytokine-activated killer cells or tumor-infiltrating lymphocytes after they reside in tissue cul-ture for several weeks in the presence of rIL-2.

Recombinant granulocyte-macrophage colony–stimu-lating factor (GM-CSF) (Sargramostim) and granulo-cyte stimulating factor (G-CSF) (Filgrastim) are cy-tokines, or growth factors, that support the survival, clonal expansion, and differentiation of hematopoietic cells. These factors are normally produced in the body by monocytes, fibroblasts, and endothelial cells. GM-CSF induces bone marrow progenitor cells belonging to the granulocyte or macrophage lineage to divide and differentiate into mature cells. G-CSF induces the mat-uration of granulocyte progenitor cells.

In general these recombinant cytokines are indi-cated for acceleration of the recovery of circulating white blood cells in patients who have depressed hematopoiesis, as a result of either chemotherapy or congential disorders of hematopoiesis. A list of indica-tions for the use of GM-CSF and G-CSF is provided in Table 57.2. 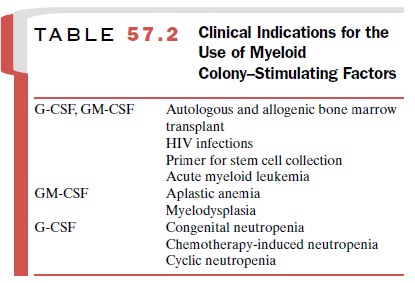 Results of several phase 1 and phase 2 clinical trials suggest that these cytokines are well tolerated. Adverse effects are those commonly observed following the ad-ministration of molecules produced by biotechnological means.

They include diarrhea, asthenia, rash, malaise, fever, headache, bone pain, chills, and myalgia. Many of these effects can be ameliorated by the administration of analgesics and antipyretics.

Human recombinant interferon- (rIFN- ) and rIL-1 also show promise as immunostimulators, principally as adjuvants in the treatment of viral and malignant disor-ders.

rIFN- is produced by leukocytes and inhibits viral DNA and RNA replication. At lower doses, it can stim-ulate macrophages, T lymphocytes, and natural killer cell activity.

rIL-1 is produced by macrophages in the host and is necessary for activation and development of immune cells. Intravenous administration of rIL-1 is associated with the general augmentation of immune responses.